When I was a boy, (and this is just over 20 years ago), Middle Wallop Airshow used to have a mass event that was known the world over. The Army Air Corps and Royal Air Force would park over 100 helicopters in nearby fields, and then towards the end of the day they would all take off from behind the rolling downs of Hampshire and move slowly towards the crowd, accompanied by Richard Wagner’s March of the Valkyries blasting on loud speakers. It was a very iconic (and confident) display of British military power, and one that is impossible to forget.

Yet today, the British military doesn’t have enough helicopters to spare for such an event, and even if it did, they don’t have enough money to keep them all flying at the same time. As we all sense, decline in the current era is very real and observable, and affects everything in our daily lives. There was a post on Twitter recently that caught my attention and reminded me of something I had noticed back in 2007, this time regarding the deterioration of the music industry. To me back then it seemed that all pop songs had begun to sound very similar. The radio at work churned out tracks that were often indistinguishable from each other, yet some claimed it was just people getting older and complaining. Considering I was only 17 this critique didn’t apply to me, and now research has shown a massive shift took place, as demonstrated in the graph below. 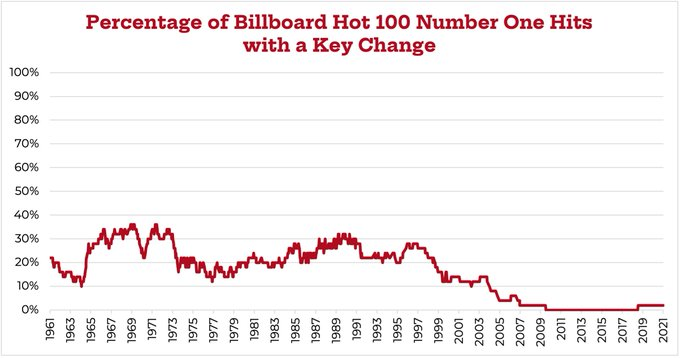 During the late 2000s key changes in songs almost completely disappeared, meaning tracks became repetitive and lost almost all of their individuality. There has also been a consistent decrease in melodies, variety of instruments and tempo. There are bands and singers who of course have avoided the current monotony, but they tend to be independent and rely on Youtube, Bandcamp and other platforms to sustain their incomes. It is ironic of course in a time when diversity is championed as the be all and end all of everything that culture has become so similar and conformist. It’s hard to imagine that any of the new books published these days could ever be considered ‘classics’ by later generations either. As politics and more specifically social justice creep into everything (including the recent coverage of the football World Cup), a lot of things have become tedious and boring.

I remember back in 1998 when the same competition was held in France, and people couldn’t get enough of it. Supermarkets had England flags everywhere; and there were sticker, coin and stamp collections along with a national feeling of enjoyment. However these days, despite high television ratings, you wouldn’t really guess Qatar 2022 was even taking place, as society doesn’t seem to bother catering for these events anymore. Perhaps we’ve all just become more private, and resent the materialism and throw away culture of merchandise we’ll forget once the final kick is over.

But I actually think there’s a little more to it than that. It’s not just that nationalism, even football nationalism, is taboo these days. It’s the fact that people seem less enthusiastic about pretty much everything, and this seems to have accelerated after we finally left the “Covid” lockdowns. For example at my local Christmas Market, its return post-lockdown was marked by the decision not to continue with the ice rink, despite it being the main attraction and the primary reason why most people went. Meanwhile in the Airshow industry, something I have been close to all my life, it was announced that Europe’s largest free event in Sunderland was ending, just months after the Royal Navy’s only remaining airshow at Yeovilton mysteriously disappeared as well.

The lockdowns seem to have drained what little energy there was left in Britain (both economic and psychological), and we all have less as a result. The reason that the Labour-run council in Sunderland gave for axing its most popular annual event was climate change, and its commitment to becoming carbon neutral. The idea that a few days of flying affects pollution levels compared to the millions of car journeys in the city every year is absurd. Yet absurdity genuinely defines our current culture, and no more is this better exemplified than in planning and infrastructure. 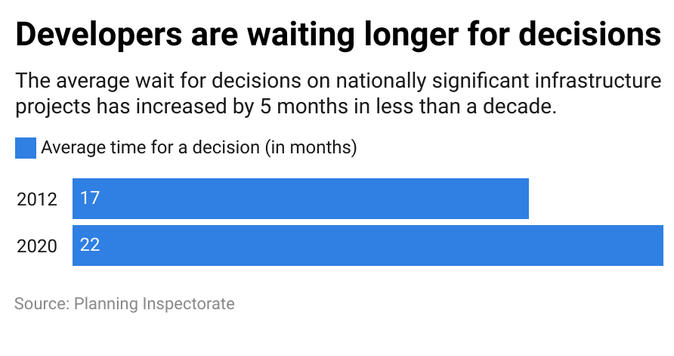 Now you might ask what planning applications have to do with culture, but they’re actually very closely linked. We aren’t building enough new homes, and we certainly aren’t good at building infrastructure either. We currently use Victorian sewers and power stations from the 1970s, and even if mass immigration had never happened, these updates would still not be done because we’re now such an incompetent nation. As a country we do everything we can to stop genuine progress, and tie ourselves up in knots when somebody tries to innovate. The reason construction is connected with cultural decline is because a lack of housing means young adults no longer have their own personal space to be creative and have families. Whilst at the same time their energy bills sky rocket because we didn’t build a new generation of power stations. As a result, their productive capacity and general path in life becomes restricted, and thus the amount of culture they consume and produce goes down as well.

Currently 32% of males and 21% of females aged 18-24 live with their parents, which is a 46% increase since 1999. Young adults in the late 90s had more independence, disposable income and housing options than their contemporaries today – and they were much more successful on a per-capita basis. Is it really a surprise we have cultural decline in Britain, when the age groups usually responsible for cultural innovation can’t even afford to rent a house? Leftism is strangling everything it can get its hands on, turning our culture into a conformist, monogamous clay that can be moulded into a sculpture of the elite’s choosing. Coupled with the rising cost of everything, caused by the double own goals of lockdowns and Ukraine, our culture is looking in a very bad state indeed.