I just can’t even:

Broccoli and raspberries could give you COVID, the Food Standards Agency (FSA) has warned.

Health experts revealed the virus that causes Covid-19 can live on some ready-to-eat groceries for days.

The tests were carried out for the FSA in a laboratory and found coronavirus lived longer on foods with uneven surfaces, such as broccoli and raspberries.

This is a real article. People actually did this “research” and so-called journalists reported it with a straight face. I usually make a point of not linking to Lying Press sources so as to avoid platforming fake news and extremism, but I will make an exception for this one.

You can read the article here. I want future generations to know just how stupid Clownworld got.

This was in comparison to smooth-skinned produce such as apples.

But the scientists have advised the risk to consumers remains very low.

Then why the headline? 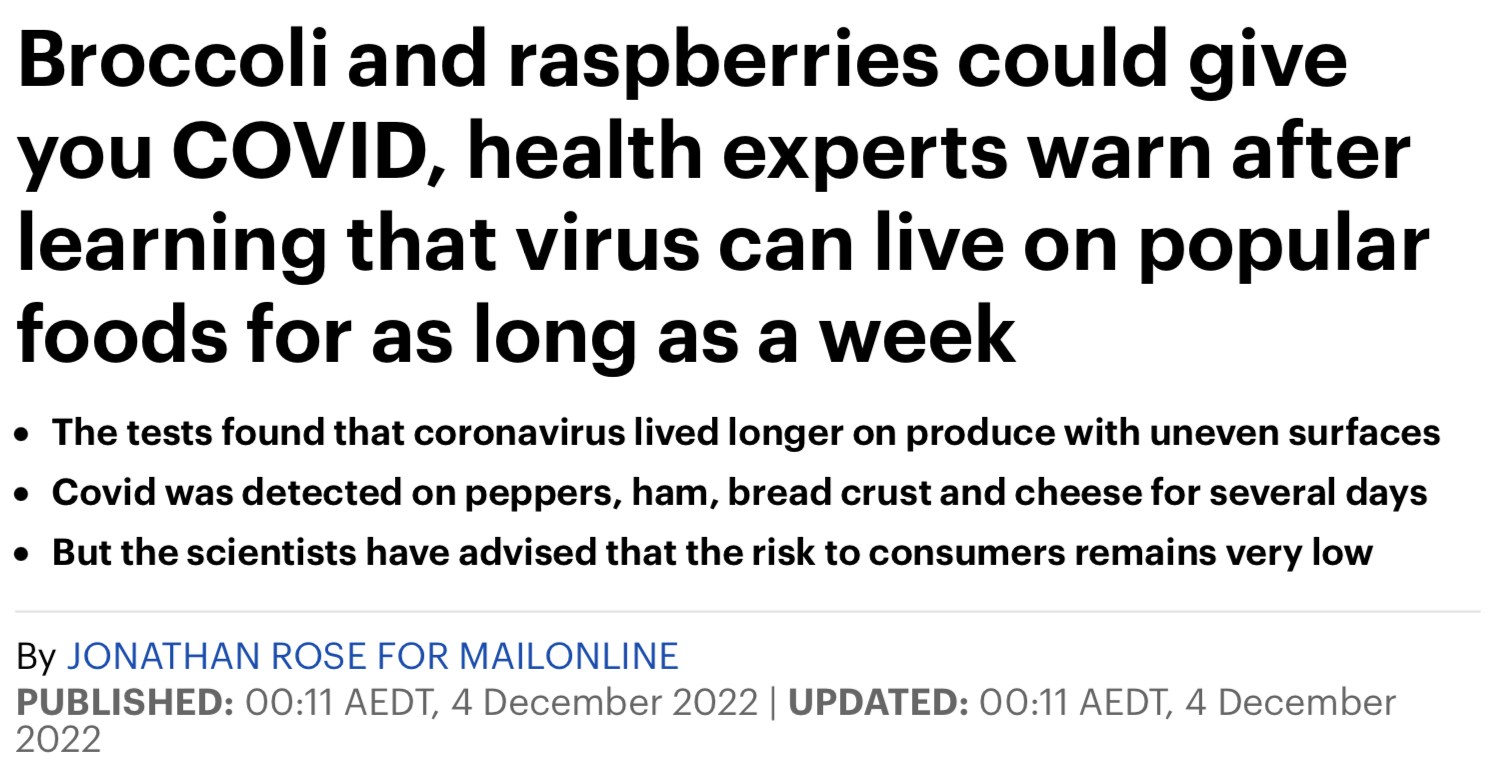 Laboratory tests saw the SARS-CoV-2 virus smeared on packaging and food, including fruit and bottled drinks, that people might put in their mouth without cooking or washing.

The results varied, with most foods tested having a significant drop in levels of virus contamination over the first 24 hours.

But for peppers, bread crust, ham and cheese the infectious virus was detected for several days under some conditions.

It was also present for several hours on the surfaces of croissants and pain au chocolate.

Allow me to translate all this for those of you who are not retarded:

Everybody knows that Covid is the flu, the death numbers were deliberately exaggerated and it killed mostly old and sick people. The best defence against it is to eat, exercise and sleep well. Even if this nonsense is correct, the boost to your immune system from the broccoli would more than make up for an increased risk of Covid.

Moreover, the increased death rate and dive in the birth rate can be directly attributed to the notvaccine forced upon billions of people. Covid was a scam designed to inject the earth’s population with an experimental drug and provide cover for the upcoming debt supernova explosion.

You say I’ve done this joke before? Who cares.

In related news, in Melbourne’s inner north, tomatoes laced with Covid have grown to enormous size and have been wreaking havoc, killing all in their path.

Victorian Premier Daniel Andrews responded swiftly, sending in his best shock troops. Several hours ago they had the tomatoes surround at Victoria Market. The assualt however was a catastrophe, with the special forces suffering 100% fatalities. It is understood that conventional weapons do not work on the Super Covid Killer Tomatoes, thus Andrews has sent in his best Dancing Nurse Squad in the vain hope that the tomatoes will die laughing.

A government spokesperson has asked Melbourne residents to mask up and avoid travelling more than 5km from their home until the situation has been brought under control. Authorities are considering a snap lockdown.