I’ve been working a lot lately, and something I do when laden down with tasks is put on normie-friendly pop culture analysis – there’s a lot of channels out there that do this in such a way that Youtube and other sites can’t flag (yet), and it’s good to get a feel for the ground which the average person is standing on. All of these figures seem adjacent (or at least indifferent) to our thing, whether they’re looking at movies and TV shows, or thinking about the state of world politics as they see it. Despite being 90s liberals in word, at heart their instincts are telling them to resist the woke, extremist liberalism which is attacking the things they love. The many things we use to escape the dullness of modern life are being twisted into such a form that they can no longer be used for that purpose. There are people who make a living talking about this and reassuring other normies that they are not crazy and things are actually pretty bad. 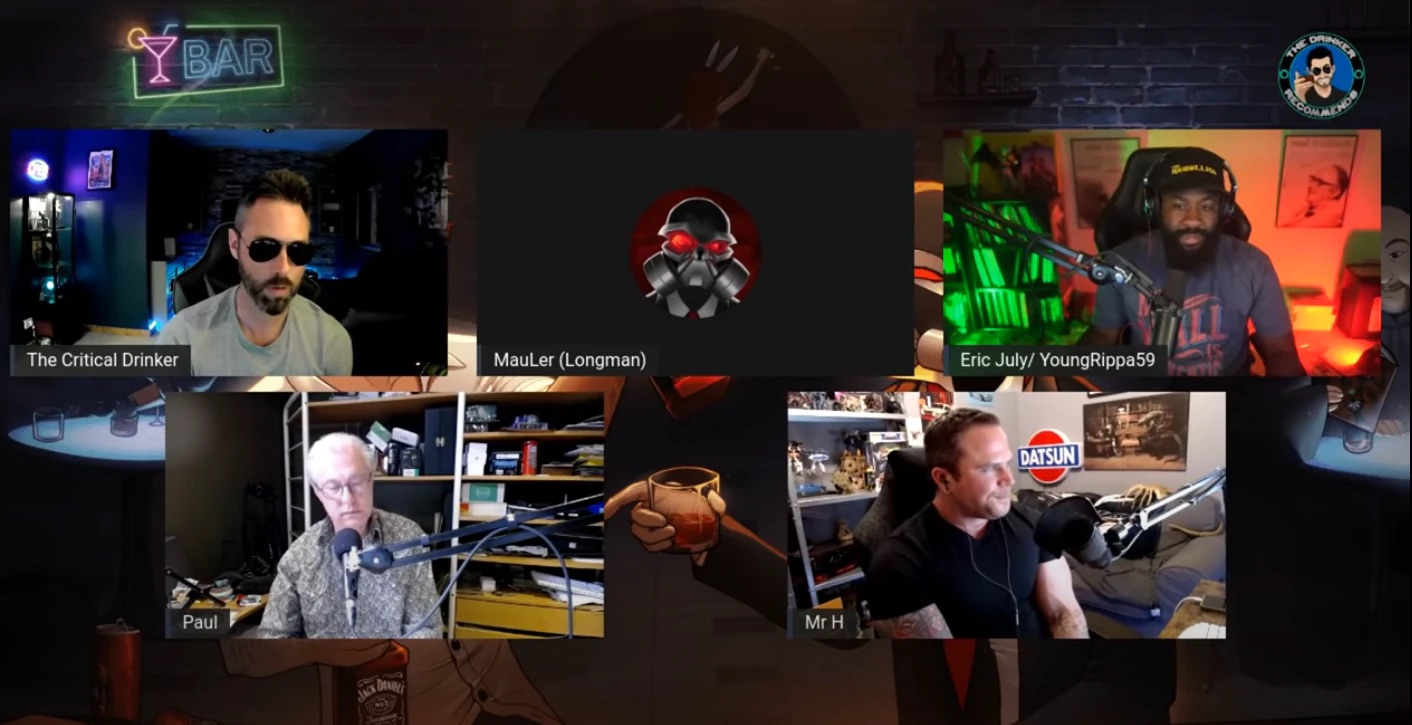 These people – such as Nerdrotic, Count Dankula, the Critical Drinker, Mauler, and many others – are basically resisting modernity from the position of 30 year old status quo liberalism. What is interesting to watch is the way they have slowly had their weapons turned against them – a great power of the woke left – because although they aren’t as far gone, they’re still sliding down the slippery slope of liberalism. They want things to remain the way they were in perpetuity, and the extremist faction of liberalism is deftly showing that things were always going to keep sliding and getting worse, no matter which era we reset ourselves to. We live in a rationalist, materialist system, the logical endpoint of which is liberalism, and there are some things in the world that rationalism and materialism simply cannot adequately address. These things don’t go away and so rational materialism will always come up with the same answer – more extreme forms of liberalism.

But through hours of half-listening I have found some silver lining to this, a hard won victory of online extremists that we should pause and appreciate for a moment. We are a small band of very committed believers; to neuter the resistance would only require taking out a few dozen people worldwide. It can often seem like an uphill battle of impossible odds, especially in a world where the vast majority of normies are incorrigibly enoculated against anything internet racists have to say. But the Bolsheviks were once a small group of perhaps a dozen or two, huddled together in secret meeting places. I don’t even know all their names, maybe nobody does, but we all know what they were able to achieve, and how they were able to alter world history in such a monumental way. Just as one blacksmith can arm a whole warband, so can a committed vanguard of a few extremists. It seems that finally the message is starting to get through.

The woke left, the extremist liberals, can take the weapons out of the hands of the 90s liberals to wield for themselves. 10 or 15 years ago those same 90s liberals would have said regarding films that casting can be colourblind, and that the best actor for the job is what matters. The woke left can take that idea and wield it unflinchingly to decide that Dune’s Liet Kynes or Enders Game’s Major Anderson are best played by black women. Objecting to identity swapping in fictional universes always invites the reply “well it’s a universe with space aliens and magic but you think it’s impossible for a woman/POC/sexual deviant to do xyz? Sort out your priorities etc.” taking blatant aim at suspension of disbelief by debasing the setting in such a way, begging the question so that they can unload the racism cannon on the normies that just want a convincingly fake world to escape into. Obviously this also happens with historical figures such as Joan of Arc, Ann Boleyn, Gustav Mannerheim, etc., and beloved folk heroes and mythical figures such as Achilles, Robin Hood’s Merry Men, and the list goes on. The response to objections here is simply, “they were the best actor for the role,” and the discussion is ended. Obviously any response to that will be met with the r word. 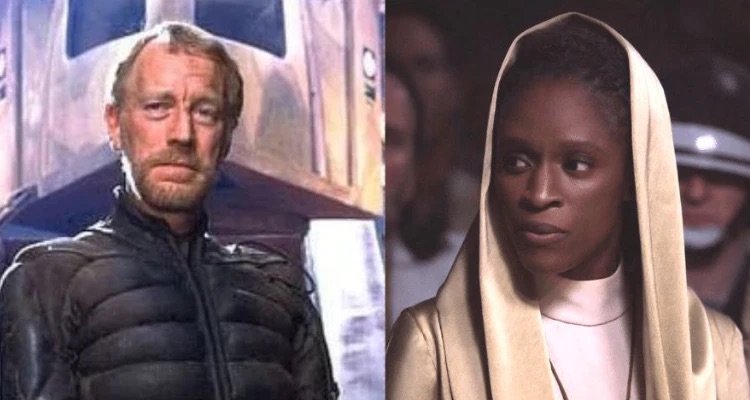 And so our pop culture critic friends are left empty handed, or at least they would be were there not a committed band of ideological blacksmiths on hand to give them new weapons. They no longer use that tired old line “best actor for the job” – after being assaulted with identity politics for over a decade, they’ve realised that they can’t overlook it anymore, and they readily use talking points that have been delivered by the online right. Amazon’s diversification of Middle Earth has caused normies with a love of Lord of the Rings to now come out and say explicitly that Middle Earth is supposed to represent ancient Europe. Normies are at the point where they will say it’s okay to have an all-white cast in a film. Whether it’s Star Wars, Warhammer, or the video games industry, people everywhere are realising that they now need to gatekeep their hobbies with extreme prejudice. They’ve realised all this too late, of course, but these are things that extremists were telling them for a long time. They are starting to pick up weapons that the left cannot take off them. Those Lord of the Rings parody articles about “elf supremacism” and “alt-rohirrim” were extremely effective. 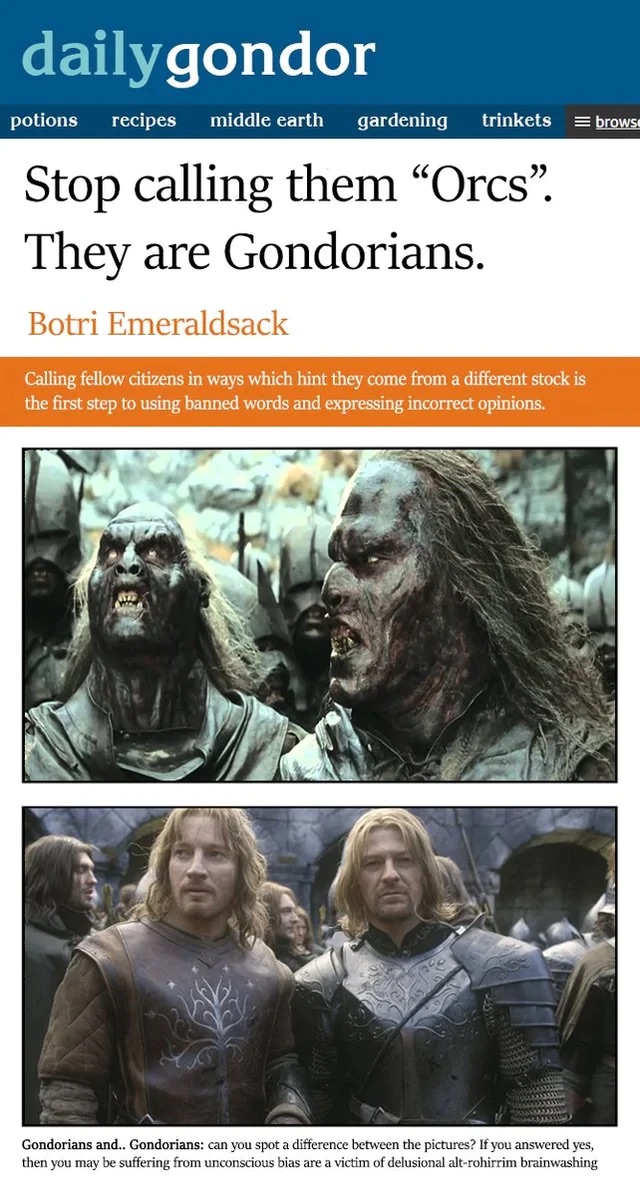 There is a misguided mainstream political idea of the pendulum which swings from left to right and provides a balance in society. The pendulum idea itself – the motion of which resembles a horseshoe, probably not coincidentally – is just a gaslighting tactic to make people stop pushing in a certain direction. There is a game of tug-of-war taking place on the edge of a knife, and it’s being played by tiny groups of extremists. The great masses of normies are sitting on the rope and watching it go back and forth. But this doesn’t go on forever, this happens until one side wins and normal people are taken completely by surprise. There is hope for the future, and no struggle is pointless, no matter how small, so long as it is directed at those who would destroy us. I know that my blog doesn’t get a lot of visitors, but it does get quality visitors, and the first ripples from a stone in a pond are the strongest. Those ripples will reach right out to the edges of the lake eventually. So long as there is a vanguard, there is hope.