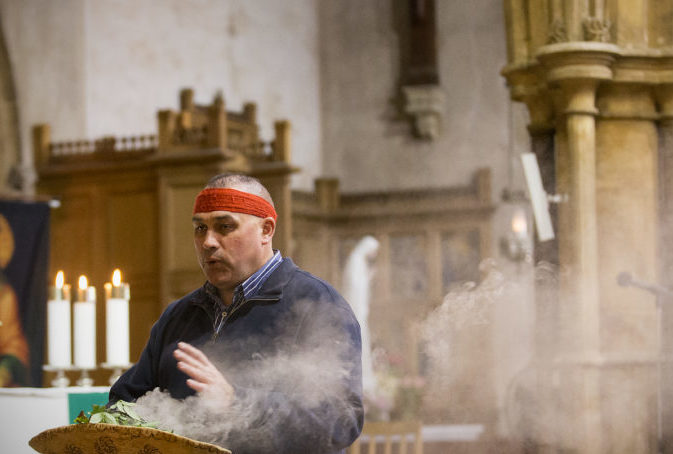 A headline in The Australian this morning – ‘Welcome to Country at Catholic Mass’. The small snippet that isn’t behind the paywall gives an indication of the direction of the rot.

Catholics could soon be acknowledging the traditional owners of the land on which their churches, schools and parishes stand, before Mass and meetings.

I knew the convergence was bad, but this is still beyond awful. But unfortunately it’s not a new development, as a casual search turned up numerous Catholic parishes who have already taken it upon themselves to leap upon the self castigating racial virtue signalling bandwagon.

Organisations such as the National Centre for Evangelisation have helpful web pages where they explain their dedication to all things worldly as opposed to the God with whom they’re supposed to be preoccupied.

The National Centre for Evangelisation acknowledges the Australian Aboriginal and Torres Strait Islander Peoples as the first inhabitants of the nation and the traditional custodians of the lands where we live, learn and work.

What follows is a nauseating ‘prayer for reconciliation’ which is so awful that it could only have been written by a woman. I could not stand to step foot into one of these churches, and I will not do so. Once you recognise their allegiance to Globohomo, then you cannot un-see it.

Out of all of the current modern trends that infest Australian society, the whole scale regurgitation of faux submission to forty year old aboriginal best practices is the one that most sticks in my craw. And this will not change. Those of us who are old enough to resist this insidious propaganda will die off, while the newer generations view us as fossilised racists that are stuck in our ways, never understanding that they have been manipulated into accepting a false worship of a pagan society that never existed.

For the Catholic Church, this is the Australian version of worshiping at the feet of a fertility goddess from the Amazon. And it is only a first step; as with everything pushed by our Satanic overlords, the acts of submission will expand and evolve year by year, incrementally introduced by fanatical fools brandishing their degrees in aboriginal women’s studies.

So another community closes its doors to me. The path of true allegiance to God is a lonely one. So be it. These churches deserve nothing more than to stand empty to their false allegiance to God. So do not cross their boundary. Refuse to give them your charity. Make the effort to seek out those that are not converged, that stand fast to true faith in our most Godless time. Thankfully, it is getting easier by the day to distinguish between the two.