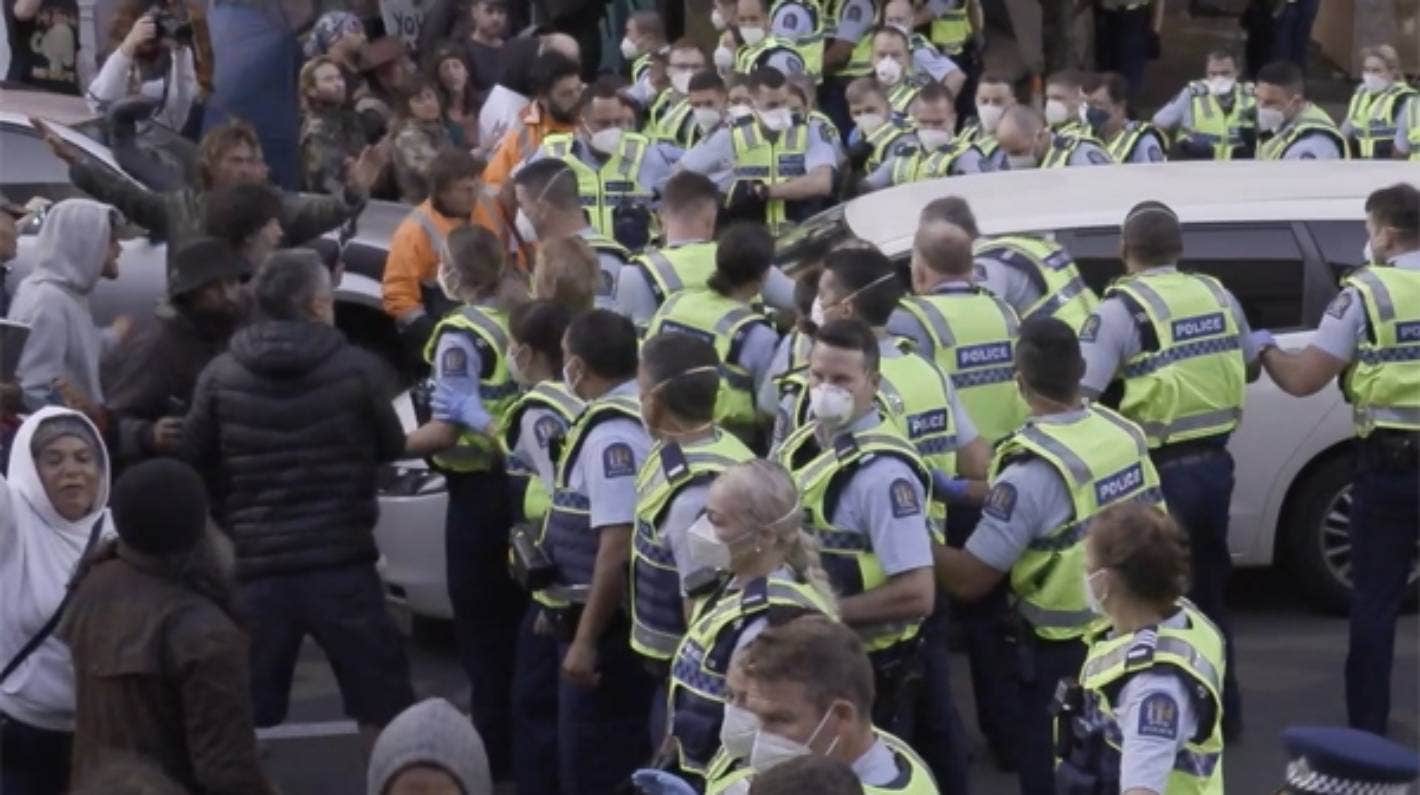 In news which will surprise precisely nobody, New Zealand police officers who were violently disrupting a peaceful protest in Wellington against vaccine mandates were almost struck by a car earlier today.

Here it is from another angle.

For context, here is footage of New Zealand police officers brutalising peaceful protesters earlier in the day or over previous days:

NZ Anti Mandate Parliament Standoff Things have escalated, Police surrounding and then attacking The People. Only retreating after realising they were Totally outnumbered…This is going to get messy. Godspeed NZ pic.twitter.com/j3KiejZZ3I

Here is footage of more of the same from several days beforehand:

#NZPolice hell bent to race to the bottom and smash any good will they have. Who threw the shit at them anyway? So many cameras and no one caught the footage. Guess another lie. pic.twitter.com/75my05pwrN

In case you’re wondering, yes, they stripped her naked.

In Canada in recent days, masked, black clad special forces have violently disrupted the peaceful blockade of the capital, Ottawa.

A woman was deliberately trampled by police horses. Reports indicate that the woman on the mobility scooter trampled by “Fluffy” suffered a dislocated shoulder. She is also a Red Indian of the Mohawk tribe.

Canada Wow, Astonishing Hypocrisy…Who would have thought The BLM and 20 months could make such a difference… pic.twitter.com/XhQ2ETwcGV

Financial institutions are toeing the government line, working to demonetise freedom protesters in exactly the same way as nationalist YouTubers and American January 6 protesters were demonetised over recent years.

If you’re wondering what they mean by a digital transition, this is it. The digitisation of the financial system has nothing to do with speeding up transactions and everything to do with micromanaging every aspect of our lives and punishing dissent.

Thus it is important to view the Wellington car attack in its proper context. This is not a black and white situation. It is unclear who is really responsible for inciting the narrowly-avoided serious incident, and it is important that both sides work to understand each other. Above all, we must not allow this incident to undermine our diversity. Diversity is our strength.

This is why I encourage everybody reading this article, the next time you see a peaceful freedom protester, rather than trying to kill them with your car:

holy shit wait for it… pic.twitter.com/FTUvsb4KVz

Go up to them, give them a hug, and promise that you’ll ride with them.