Maybe I shouldn’t have told my (now ex) employer in a loud voice interspersed with curses that I wouldn’t stop coming after them until I was either dead or until they had been sentenced to death for crimes against humanity. Maybe I shouldn’t have written an article of my experience with them and had it published in the XYZ. Maybe I shouldn’t have E mailed the article after it was published to my ex employer letting them know that this was only the beginning of my fight against them. Or maybe it was my speech at the Bunbury protest telling people to turn back to Christ. Whatever the reason, today [Friday] the Goon squad showed up at my door.

Looking like a couple of armed Mormons, the two white pedophile apologists arrived. There were two cars outside of our house and we think two more replacement kiddy fiddlers remained as back up just in case I said any naughty words to the ones at the door.

“Are you Stephen Wells”

“Who are you and what do you want?”

We are from State security. We just want to have a chat”

“I’m not interested in talking to you, please get off my property”

“Any reason you don’t want to talk to us?”

“Goodbye”. Then I closed the door.

The Mormons with Guns then went and sat in their car outside my house for another 5 minutes. I assume to have a sulk and console each other, possibly with a mutual hand job, then they drove away.

We then activated the emergency phone tree network and asked people to stand by. Basically if we get to the stage of Goons arresting people we can at least get a few dozen people to someone’s house to film it before a person is hauled away and a few hundred people to the police station to protest within a few hours. This is one of the reasons to get out of the city. Things like this are much easier to get going in smaller towns.

Within two minutes of the white shirts leaving, a couple of lesbians (I’m just guessing here. Mainly because I’m “homophobic”) turned up on our doorstep from the department of health. I gave them a similar short shrift and my wife had the presence of mind to film it this time.

Stephen Wells demonstrates how to dispatch with Health Department goons, shortly after state security have been dispatched. All for questioning the #Covid_19 narrative. pic.twitter.com/eg42vqQcU3

My wife has been shaken by this pretty badly. But the thing about my wife is that the more she is pushed the harder her resolve becomes. It’s one of the many reasons I love her so much. We both know to our core that backing down won’t save us. They will give us no quarter and there can be no surrender. We keep going until we can either have them all arrested and properly judged, or until we die (from old age or at their hands).

This was their first attempt at intimidation of us at our home. I doubt it will be the last. Our advice to anyone facing similar is to say NOTHING. Do not consent to a conversation. Do not answer ANY questions. Ask them to leave, then shut the door. If you can’t walk away from them and they won’t leave you alone, simply don’t open your mouth NO MATTER WHAT. Nothing you can say will help. You will only increase the chances of giving them an excuse to do whatever to you.

If they say you that you are under arrest, say “I will come peacefully but under duress. Please don’t hurt me or put me in cuffs” Then be quiet again. Say NOTHING. Unless you are planning on sacrificing your life, there is no point in trying to resist. There will be more of them and they have guns, tasers and pepper spray. Killing anti vaxxers is still generally frowned upon, but who knows how long for? I think we will all know if we get to the Gulag Archipelago stage, where people who get arrested don’t get seen again. So I don’t need to preempt things. Stay peaceful. Stay calm. Stay that way as long as it still makes sense to. Better they hurt or kill you and it’s filmed, than you give them a blister on their little finger and you end up on ABC news as a deranged terrorist. That may change one day, but there’s no need to write about it

I’ve been a little bored since being stood down from work, so I suppose I should say thank you to the State Goons for giving me some mental stimulus. Though generally I prefer to play chess.

Update: This was left in our mail box. Poor old Brett travelled three hours to come and ask me to marry him and I didn’t even allow him to propose. It must have been a lonely 3 hour ride back home again. 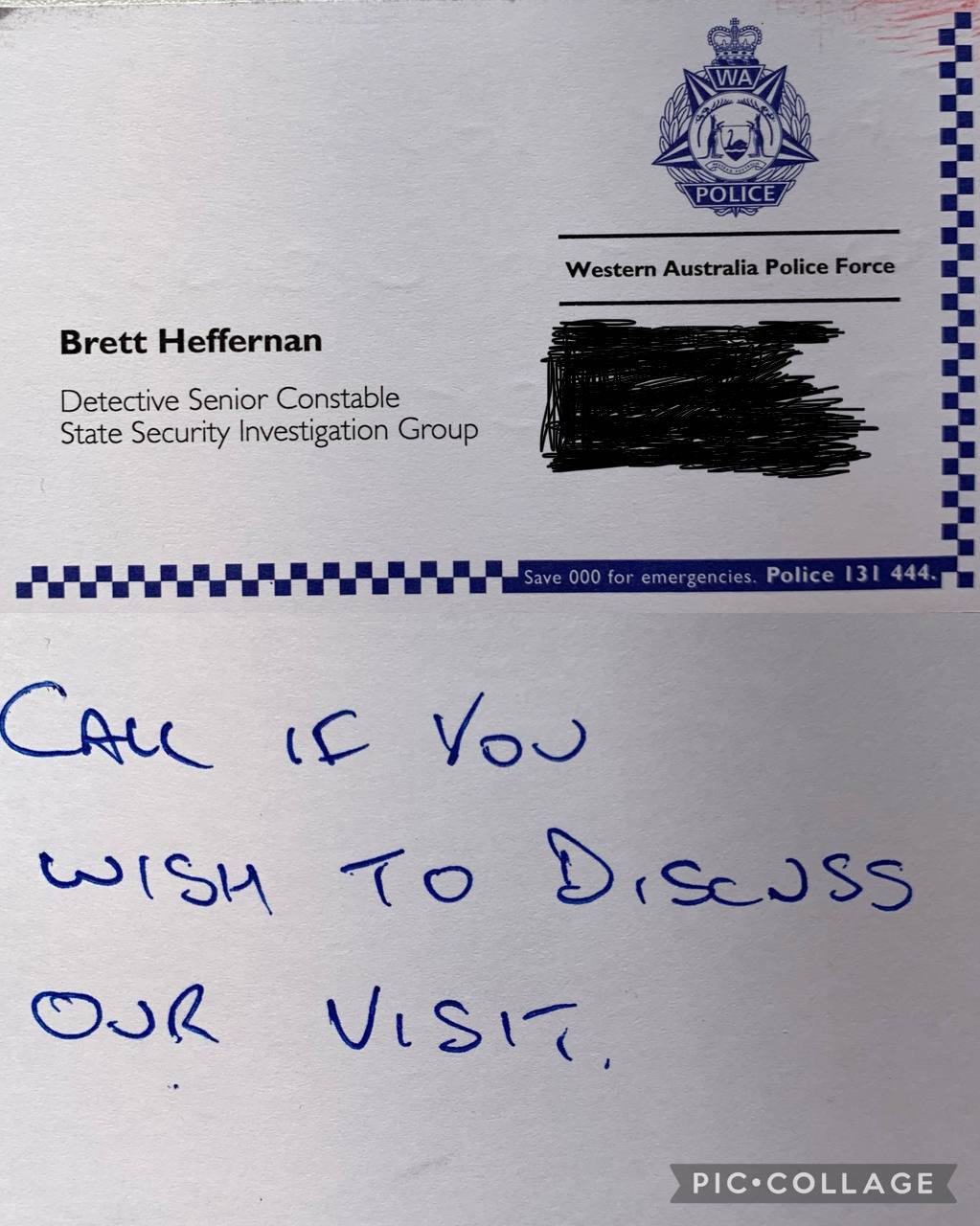 Hopefully he put it in my letterbox before he had the hand job.