Originally published at Pushing Rubber Downhill on November 17, 2021. Kyle Rittenhouse has since been cleared of charges by the jury. You can purchase Adam’s books here.

The most revealing aspect of the Kyle Rittenhouse trial has nothing to do with the obvious corruption of the prosecution, the blatant disregard for due process shown by the sitting president, the surprise that the presiding judge was ever let near the trial, the sheer ineptness of the prosecution’s case, nor the stream of liberal tears, rage and angst.

No, the craziest thing about this whole episode, which will go down in history as one of the most famous trials in the United States, is the seething rage of blacks.

There are people on the Left, cocooned inside the media echo chamber of hate propaganda, who sincerely believe that Rittenhouse is a sort of right-wing assassin, who went to Kenosha to kill “racial justice” protesters. This is the narrative of the Rittenhouse case created by CNN and MNSBC, and amplified by every propaganda organ of The Party.

Did I mention that actual Communists are in Kenosha?

Here is the Tweet that accompanies the above quote over at The Other McCain:

“We ready for change” chants from a group of Revcom (Revolutionary Communist Party) demonstrators outside the courthouse this afternoon #Kenosha pic.twitter.com/5rUcRcYRfE

They’re almost all black. Gab has been filled the past week with people reposting Tweets and other social media messages from or about blacks who are openly calling for the lynching of Rittenhouse if he walks free from the court. Which is weird when you think about it because Rittenhouse shot three whites; blacks had nothing to do with it.

But he didn’t shoot three whites – he shot one white, and two Jews. Which is why the Jews are also posting similar lines to the blacks: 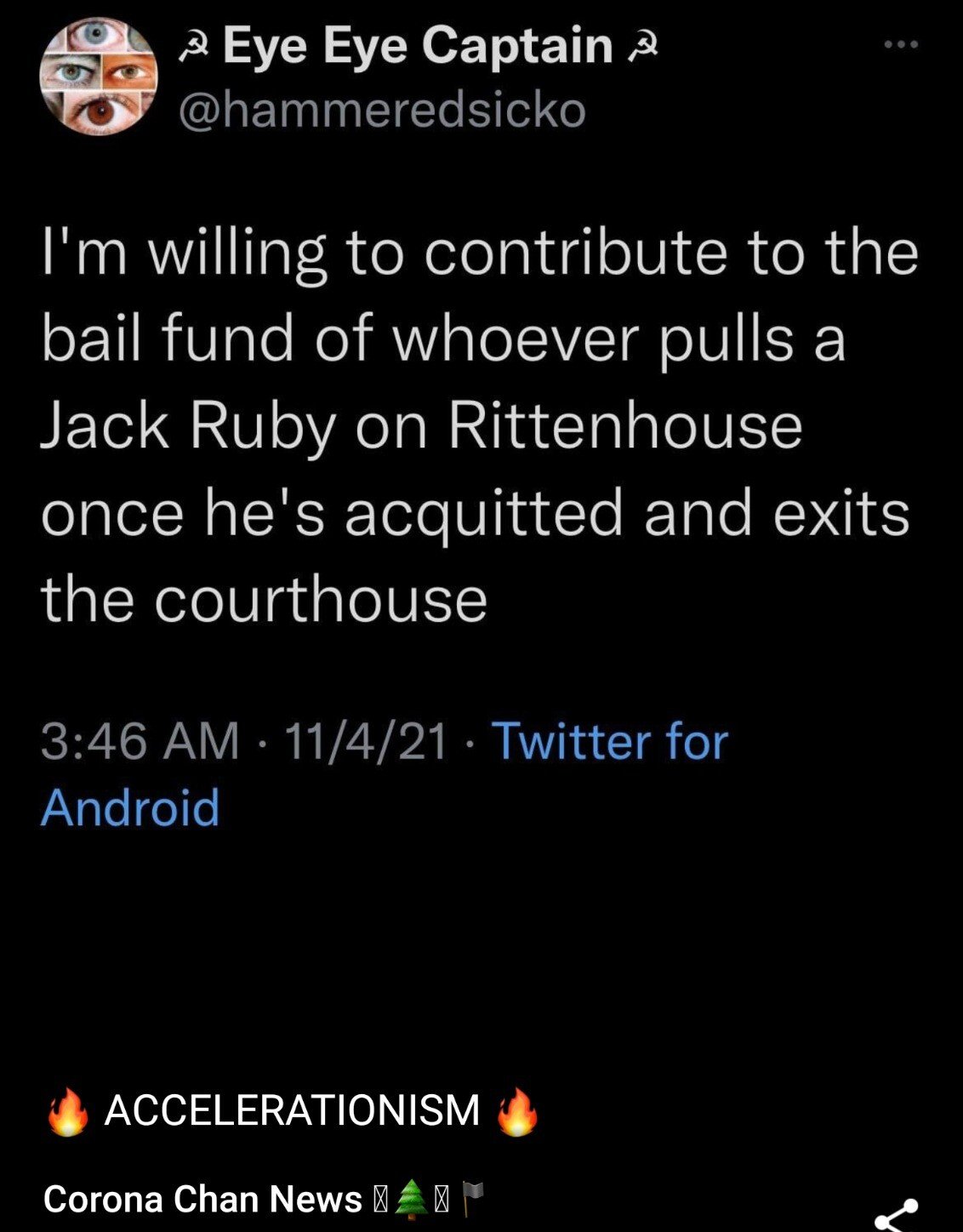 Antifa are the foot soldiers of the ADL, but blacks are their social justice weapon. Usually they pretend to make the point in question to be about blacks; the Black Lives Matter movement, entirely founded by the same people, is a good example of this. So the veneer of racial authenticity enables blacks to be effectively used in this way. The pervading white liberal guilt subsequently blocks those same whites from being able to examine on a factual basis what is being sold to them.

But blacks losing their minds over Rittenhouse completely blows this cover out of the water. Which means that it’s not about blacks at all, they’re just the useful idiots. It’s about tearing down the whites one salami slice at a time.

Whether Rittenhouse walks or is convicted, the great takeaway from this dramatic episode is the red-pilling effect it is having on great numbers of white normies. Because due to the fact that the far-left have gone all in on this young man, they have as a result pulled back the curtain on just who is pulling those levers in the land of Oz. It won’t be the final drop in the bucket but it sure will be a grand contributor.