In a sea of lies and falsehoods, perhaps the most egregious example of the media deliberately publishing outright lies as fact was the British online newspaper The Independent leading with the front page sub-headline, ‘Full story: Teenager who shot three black men with rifle found not guilty on all charges.’ At least they forgot to claim that it was a ‘machine gun’. What makes this lie all the more blatant is the fact that it was published after the trial’s conclusion, when the basic facts of the case were well established.

No doubt the newspaper will soon publish a ‘retraction’, which will be hidden away in the bowels of its digital resource, behind a curtain and under some bed covers. But this is not the only example of the media’s attempts to twist and distort the truth so as to directly influence the outcome of the Rittenhouse trial. The following screenshot is a good illustration of this in action. 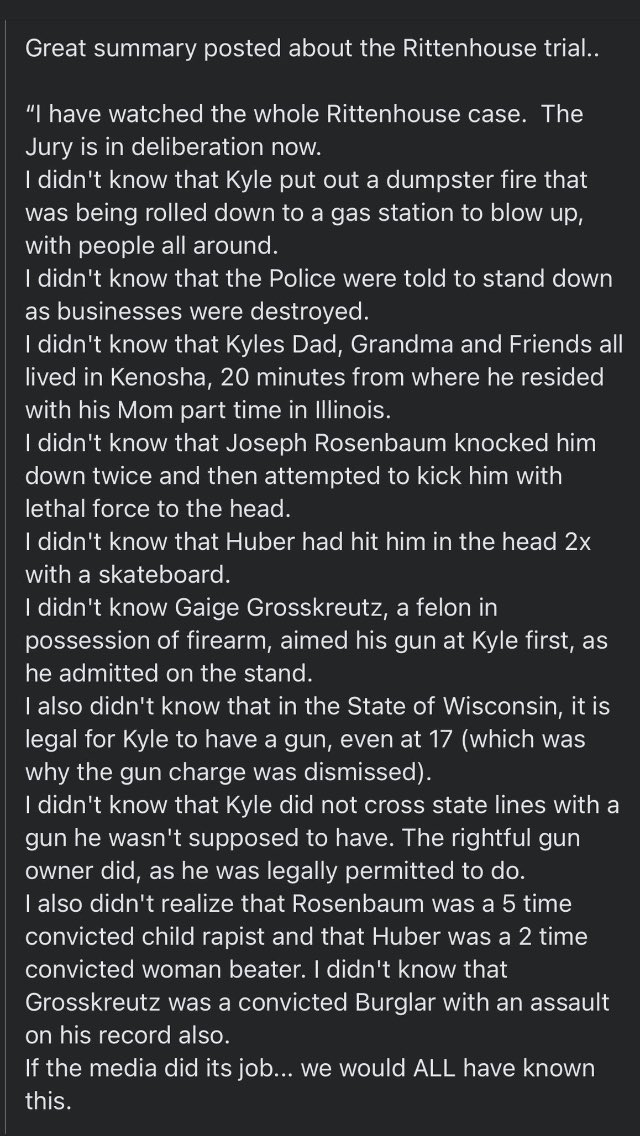 So lies, lies and more lies. But there is only one line in this example that interests me, and that is the final one:

If the media did its job … we would ALL have known this.

We often write about the steps involved with taking the red pill, the journey as such. You seem to be getting there but it turns out you’re only part way there, or not even close at all. So let me help those of you who still suffer under some delusion: as regards the Rittenhouse trial and every other news story ever published in the history of the world, the media did its job. To the letter.

All of those technical points that either the media did not report on or twisted in some way are all perfect examples of the media doing its job. Its job is to lie and subvert the truth so as to benefit its masters. That is it. Most media outlets lose money; they should be bankrupt. They’re not bankrupt because they are propaganda fronts and thus they benefit their owners and the global powers in a different way. In that sense they are of immense value. The current deliberate inflation push so as to render currencies near worthless will make those sitting at the top even more richer is a good example, as the media is front and center in distorting what is really going on. Its all about theft, stealing the wealth of nations. The wealth of the lower and middles classes, (at least what’s left of the middle class).

Your attitude towards the media should be twofold – do not consume their products under any circumstances, and be outright hostile to them whenever you come in contact with them.

The beautiful moment Channel 7’s Nick McCallum is run off the steps of Victoria’s Parliament by Freedom Protesters.#VaccineMandate pic.twitter.com/f3ks39BpsA

That beautiful footage is the moment when the public turns on the media because they are now beginning to recognise that the media is the enemy. In that example the reporter and his camera crew were allowed to calmly walk away. I am sure that in that reporter’s long career of lies he has never experienced such a hostile encounter. If the media’s foot soldiers had any brains at all they would be well advised to begin to worry about the future nature of public reactions to their presence.

The media will not change its spots; its job is to lie to the public with whatever slant or pitch they are instructed to provide. When the satellite countries of the former Soviet Union began to collapse, the very first buildings that were occupied by the revolutionaries were the television and radio stations, and for very good reason. But instead of taking them over what they should have done was to burn them all to the ground.