A well organised and peaceful protest was held at Victoria’s parliament last week. Freedom protesters occupied the high ground overnight and stayed there all the next day. 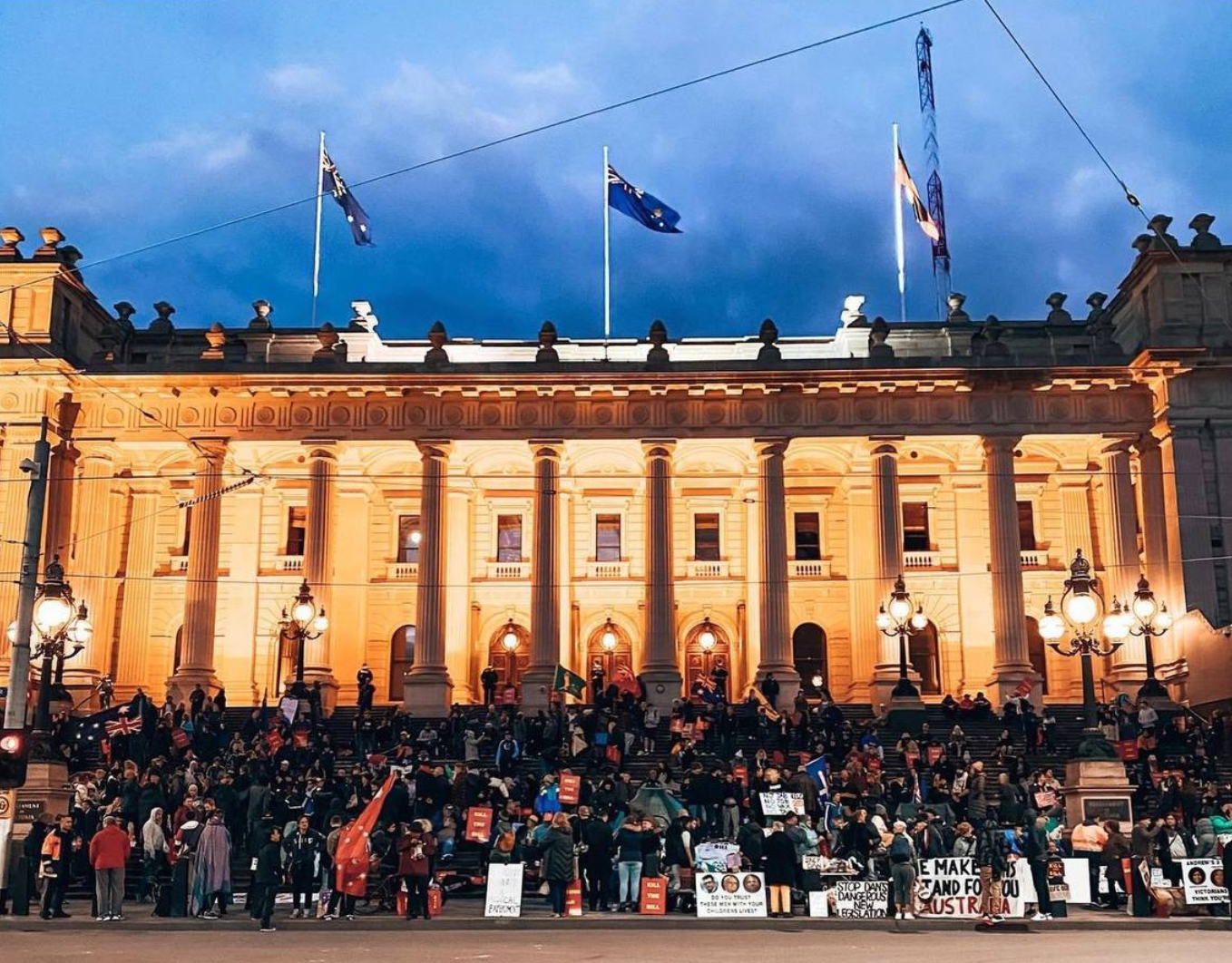 It was brilliant optics and a moral victory. The image of hundreds of ordinary Aussies reminding our politicians that they are elected to represent us contrasted sharply with the comical displays by Victoria Police during Melbourne’s extreme lockdowns. Ludicrously armoured, black clad officers often stood in phalanx formation for hours as though Hannibal himself were about to lead an army up parliament’s steps. 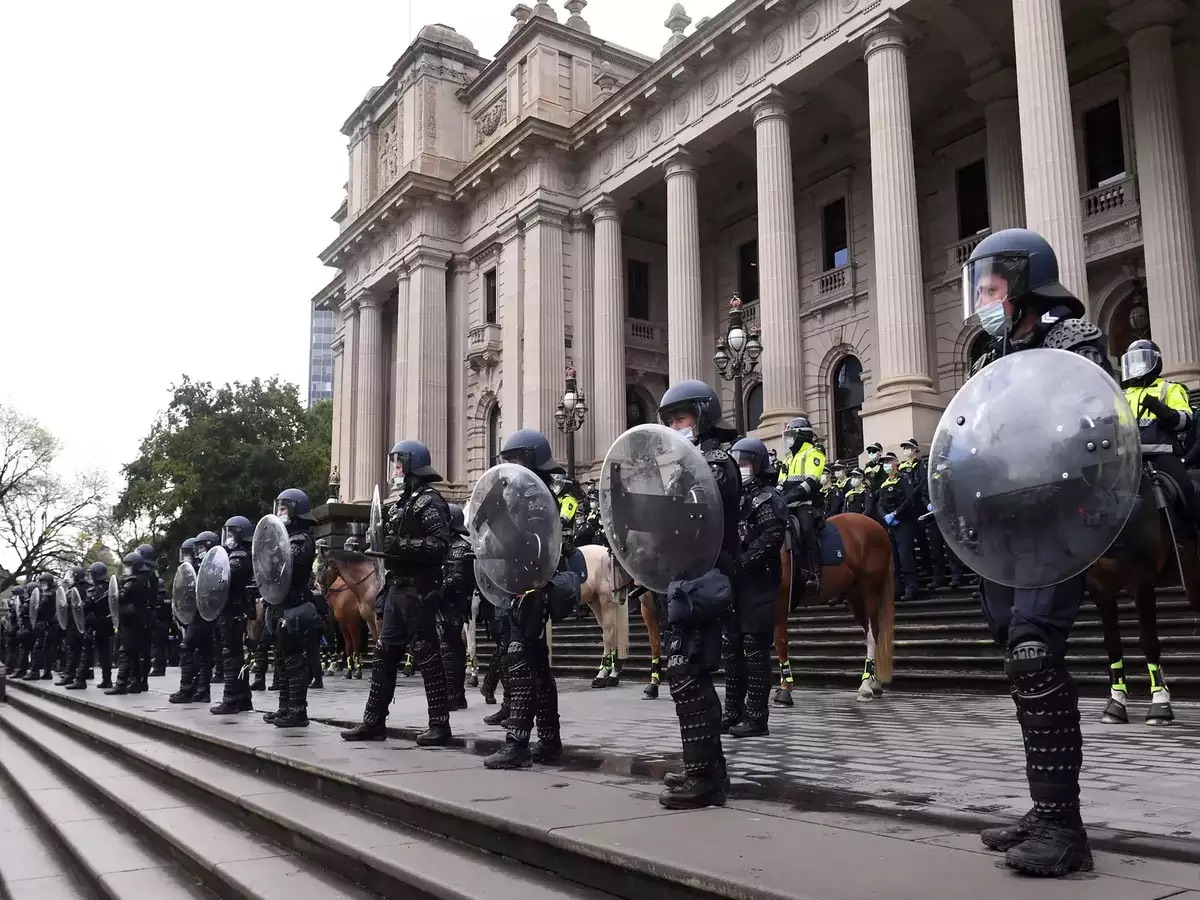 When the Lying Press sent one of its agents to look like he was reporting on last week’s event so they could lie about it later, the protesters were having none of it.

The beautiful moment Channel 7’s Nick McCallum is run off the steps of Victoria’s Parliament by Freedom Protesters.#VaccineMandate pic.twitter.com/f3ks39BpsA

That’s what you call a humiliation.

Similarly at the massive protest in Melbourne on Saturday, a plain clothed Sky News crew were sent packing as they reported on the hundreds of thousands of people congregating at Flagstaff Gardens. They were jovially surrounded by people booing, jeering, questioning why on earth they were wearing masks outdoors when nobody else was, and blowing horns. A few minutes later as they tried to report from the other side of William Street they were sent packing again.

There was some discussion amongst my group as to whether or not it would have been wiser to exploit Sky News’ coverage to amplify our message. After all, Sky is the one mainstream channel which actually gives the counter narrative anything like a fair go.

Being a little bit of an extremist myself, I tend to favour the policy of “Never speak to the mainstream media. Ever.” I was encouraged by the fact that the Overton Window has shifted so far that Freedom Rally attendees will not countenance any mainstream media whatsoever. This indicates that people opposed to lockdowns and vaccine mandates are aware of the bigger picture.

Sky News acts as a pressure release valve. It gives the appearance of opposing the worst excesses of state power while fully supporting the Narrative. It never questions the need for lockdowns or vaccines in the first place. For example, in 2020 Peta Credlin’s tenacity in reporting the bungling of Victoria’s hotel quarantine system reinforced the argument for the construction of Covid camps.

Recently, federal Liberal Senator Gerard Rennick, who is currently crossing the floor in favour of a private member’s bill against vaccine mandates, received a hostile reception from the Sky News host when he raised the issue of adverse reactions to so-called Covid vaccines.

Qld Aus Epic WAX Truth Bombs Ladies and Gentlemen we have a New Hero. Senator Gerard Rennick destroys Sky News, he gets interrupted, then runs over the top of the Host…When asked about 2050 Net Zero Carbon BS… He says he’s not interested, then drops the Bombs pic.twitter.com/rshu1vUmYI

You are more likely to get sick or die from an adverse reaction to a Covid vaccine than you are to catch Covid or die with Covid if you are unvaccinated. Australia’s hospitals are currently being overwhelmed with patients suffering adverse reactions to Covid vaccines, and state governments are refusing to provide data on the true scale of the health crisis they are causing.

You will never hear this narrative from the Lying Press, and Sky News will only ever give a watered down version.

Moreover, Sky are fully on board with the government’s agenda to return to mass replacement immigration under the pretext of filling a so-called skills shortage in Australia’s economy. Here, Sky and the Coalition pull a similar pressure release scam. They oppose illegal immigration while fully supporting the demographic replacement of Anglo Australians over the long term, and they make sure an immigrant who (quite rightly) opposes Islam presents the arguments.

1. Families of the victims are shouting “down with Islamic Republic” and “down with Khamenei” as Islamic Republic held the first session of “Investigating the Incident of the Ukrainian flight PS752”.#PS752Justice#PS752 pic.twitter.com/7jKqHbRgAA

The Freedom Movement is radicalising, and this is an entirely good thing.