I just finished watching this video from YouTuber “Coach Red Pill” who has 274,000 subscribers called “Leave now while you still can”.

It was posted in the XYZ Telegram chat with the challenge “He’s right. I dare anyone to refute this”.

Coach Red Pill decided to go full black pill in this video: The West is lost. There is nothing anyone can do to save it. Anyone who tries will be killed. Everyone should sell up at 40 cents on the dollar and move to a third world shit hole while you still can. If he were a character in Lord of the Rings he would be Denethor

But, is he correct? Yes! Absolutely. There is no hope. We can’t win. We will be killed if we try. The Dark Lord Sauron will rule Middle Earth. The Antichrist is here and no one will be able to buy or sell without the Mark of the Beast.

If we are continuing in the world of Lord of the Rings, then the correct response would come from King Theoden:

If you want a real historical response to such a time, then Winston Churchill, is the go to guy:

Now, this is a Redpilled page and I can already hear the cries of protests about using Churchill as an example in calling on our blood to engage in a brother war. That Germany spent most of its time suing for peace whilst Churchill followed the orders of Jewish bankers to continue the war until millions were dead. That’s not the point. Churchill’s speech was still successful in galvanising the hearts and minds of the British people to fight to the last, even if there was no hope. If our forefathers could do this for a false cause, why can’t we do it for a Just one?

The answer to this question is simply in the paradigm that is on display in our defeated YouTuber. He cares more about his life than he cares about the meaning of his life.

What is the point of running away to a third world shit hole just so that you can avoid a social credit system for a few more years? What on earth makes anyone think that when the West falls, that third world shit holes won’t be on the hit list next for some other form of tyranny? What kind of second rate existence do you think you will be able to scratch out in the meantime?

Coach Red Pill isn’t a Christian. He is a materialist. He thinks this war is about his physical existence. Many in our movement think this is about physically protecting their family, their seed, their tribe, their race.

This war is about defending our souls. About standing up for what we know to be right, regardless of the physical personal cost and regardless of how many of us have to pay that cost.

We fight evil purely and simply because it is evil. This is what Tolkien knew and why the heroes in his book put their entire Nations on the line for complete destruction in opposing it. Because evil never stops. Evil is never satisfied. You are not safe here. You won’t be safe in a third world shit hole.

It doesn’t matter whether or not we can win. What matters is that you don’t submit. Or as King Theoden says “If this is to be our end, then we will make it a glorious end”.

Choose your ground. Decide which hill you are prepared to die on. Then fight to the end. 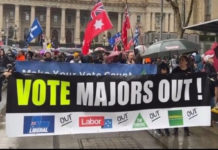