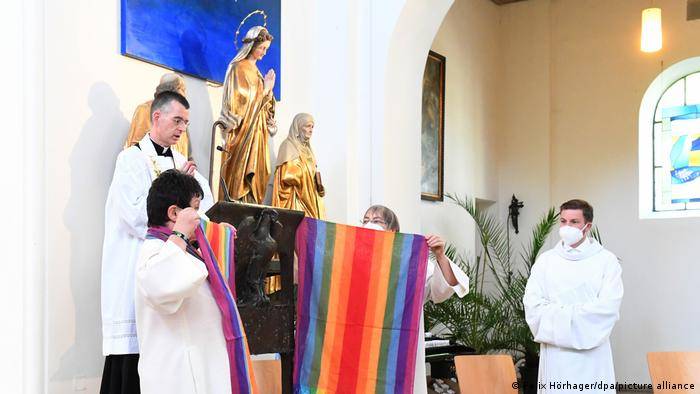 High-ranking Catholic clergy voted 168 to 28 during a gathering in Frankfurt, Germany to adopt a resolution recognizing homosexual marriage.

This statement is a direct act of insubordination seeking to challenge a Vatican decree signed by pope Francis that explicitly forbids priests from blessing such pairings as a violation of scriptural tradition.

The German Catholic Church is powerful, corrupt and decadent. A report from 2015 found that the archdiocese of Cologne alone controls almost $4 billion dollars in wealth, making it richer than the Vatican itself. The German Catholic clergy has been prone to scandals, including a bishop who bought a 31 million Euro mansion for himself.

pope Francis, who is the most pro-homosexual pope in the history of Catholicism, has superficially remained steadfast on the issue of not marrying gays. Yet in practice, Francis has shown far more ferocity in suppressing traditionalist and conservative elements in his Church, which has cleared the way for liberalizing challengers such as the super-majority of clerics who have elected to bless sodomy.

Catholic parishes in Germany have been blessing same-sex marriages, often in large public displays, since last spring in spite of unambiguous instructions to stop from Rome. The behavior has continued unopposed and has spread to more and more parishes, yet Vatican hierarchs have yet to use their powers to defrock any priests or cut ties with any pro-sodomy parishes.

The New York Times‘ Catholic columnist, Ross Douthat, has written that conservative adherents feel impotent in regards to Francis’ tolerance for liberalizing tendencies due to their belief in the doctrine of papal infallibility. The German church’s immense wealth may also cause the Vatican, which is plagued by money problems, to hesitate to fight back.

New reports chronicling instances of homosexual priests molesting teenage boys in France have also put the Church on the defensive.

Though the Catholic Church has enjoyed a brief resurgence among conservative youth seeking sanctuary from the chaos of the increasingly morally depraved West, elite interests are rapidly wearing down the Vatican’s token resistance against these forces.