However the British government try to spin this, it is clear that relentless protests, every single weekend, have forced the British Regime to back down on Vaccine Passports. 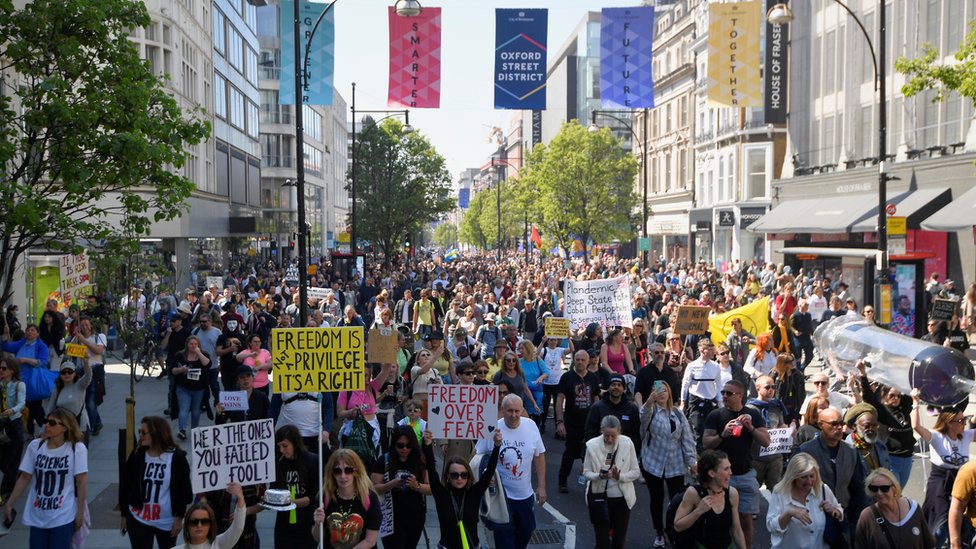 The media is the enemy. https://t.co/DVUKsHyHSp

They are likely unnerved by events on the mainland, too.

Plans to introduce vaccine passports for access into nightclubs and large events in England will not go ahead, the health secretary has said.

Sajid Javid told the BBC: “We shouldn’t be doing things for the sake of it.”

It was thought the plan, which came under criticism from venues and some MPs, would be introduced at the end of this month.

Just a week ago, the vaccines minister had defended the scheme as the “best way” to keep the night industry open.

No. 10 stressed the plan – which had been set to be introduced at the end of this month – would be kept “in reserve” should it be needed over autumn or winter.

Under the scheme, people would have been required to show proof – whether of double vaccination, a negative Covid test or finishing self-isolating after a positive PCR test – in order to gain entry to clubs and other crowded events.

The Night Time Industries Association had said the plans could have crippled the industry and led to nightclubs facing discrimination cases.

The industry body welcomed Sunday’s announcement, saying it hoped businesses could now plan with some certainty and start to rebuild the sector.

The Music Venue Trust, which aims to protect grassroots venues, also said it was glad vaccine passports would not be going ahead, describing them as “problematic”.

Problematic. Don’t you just love it when you turn their language against them.

What is more problematic however, is No. 10’s plan to keep vaccine passports “in reserve” for autumn or winter. Remember when Australian Prime Minister declared his intention to make the Covid not-vaccine “as mandatory as you could possibly make it”? He was forced to back off, but as predicted a raft of little laws at state and federal level, in collusion with the corporate sector are combining in an effort to make it impossible for people to live their lives without it.

We keep saying Australia is the testing ground for the globalists to implement heir system of control worldwide. Watch to see if the British government uses similar tactics.

It’s not over yet.