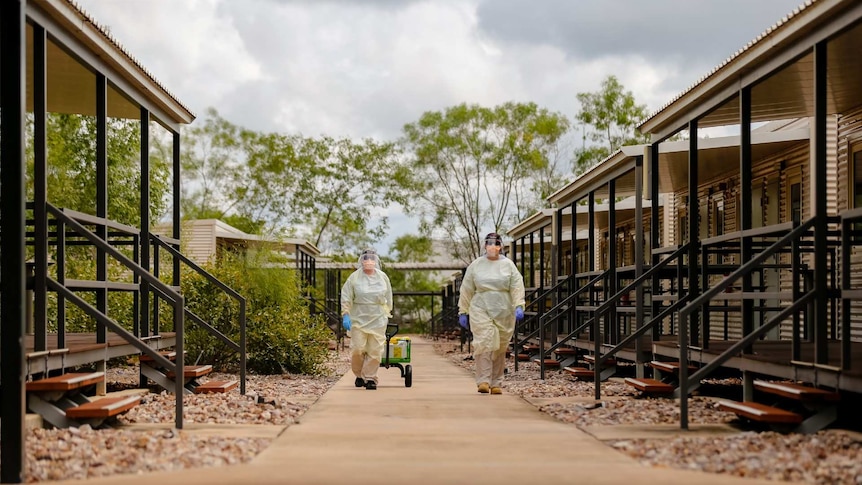 When you first hear that the government is going to build a Centre for National Resilience, ostensibly to provide better quarantine protection for returning travellers who test positive to Covid, your first thought is that the title sounds a little Orwellian but you brush it off.

A month later, local police cordon off your block, and police and army personnel go door to door. When they knock, a very nice woman in her twenties explains very reasonably that they are just concerned about the high rates of Covid in your LGA and the low rates of vaccination. She doesn’t want to force you to take the test, but if you refuse to be tested today they will come back with a court order mandating that you get tested, at which point more forceful action may be required.

You don’t really have a problem with it either way so you and your housemates all let the nice army people test you for Covid. They are all really nice, none of them are carrying firearms and you have a good chat with them. They tell you about all the humanitarian work they have done in the Middle East and about their families so you figure they are good people.

A couple of days later a different group of police and army personnel knock on your door again in full PPE gear. One of your housemates has tested positive to Covid. He seems fine, he hasn’t even been sick, but the nice police woman – you find out that her dad is from Peru – explains that you all have to stay quarantined in your home for the next two weeks.

You can order food online to be left on your doorstep and you can keep working from home. You get on just fine with your housemates because everybody knows how to keep to their own space while still socialising in the common areas. Living the single life well into your 30’s has conditioned you to living like this anyway so you think it’s normal.

The police insist on putting up a notice on your front door and on your front gate explaining that you are in quarantine. They say it is just to ensure that the community understands that there is Covid in your street. It’s not like they have painted a yellow star or anything.

One week into your two week home quarantine, another group of police and army personnel knock on your door, again in full PPE. They kindly inform you that although they know you have all been following the rules (they know because they asked the neighbours) they are still concerned about the continued transmission of Covid in your LGA. As such they need to transfer you to the recently constructed Centre for National Resilience on the city’s outskirts.

It will just be for a few weeks, until they get the outbreak under control.

You’re given plenty of time to pack your bags. You pack all your electronic gear because you can still work remotely at the Centre for National Resilience. You pack those books you have never had time to read before. They even let you take some food. Then you are put on a bus with a handful of other people from your block and driven off. You tell yourself everything will be fine, it’s not like it’s a cattle car. The bus even has aircon.

When you get to the Centre for National Resilience they make everybody take a shower. You are given plenty of privacy though and you get to keep all your things so it’s not humiliating or anything. Everyone has to quarantine for another two weeks. It is a little harder this time around because it is four people to a cabin, and it is much harder to stay focused as you work remotely.

Construction on the Centre for National Resilience continues even as more and more people arrive. Most of the construction workers are either Islander or Indian, and most of them wear their facemasks under their chin.

Every couple of weeks, really nice government health workers in full PPE tell you that they are going to have to keep you in the Centre for National Resilience for a couple more weeks, as outbreaks continue to occur all over the state and vaccination rates are still too low.

A community takes shape in the camp – sporting clubs, book clubs, knitting clubs, schools. Several bands and orchestras form. A world class dental clinic is established, then a cardiac care ward to deal with the disproportionately high number of heart attacks, and after several months a ward is opened to deal with all the pregnancies.

A swimming pool is built. There is a talk of opening a cinema but everybody just watches Netflix on their own laptops anyway. A Centre for National Resilience currency is printed featuring smiling blue haired people of every race and creed on it. An unspoken understanding emerges that a certain area of the Centre for National Resilience is the Red Light District. The muslim call to prayer goes out every morning, but only a couple of small church home groups pop up.

Community life is regularly disrupted by Covid outbreaks. Nobody can understand it as everybody is vaccinated upon entry, but they figure it must be all the new variants. Musicians in the Centre for National Resilience come up with the ingenious idea that they don’t actually need to rehearse over Zoom – given that their cabins are so close together they can just open up the windows and get someone to do the counting for them. At first this is taken in good humour but after a week a tuba player is seriously assaulted and the rehearsals stop.

After this unpleasantness people just plug their headphones in and listen to their own music. People living side by side, in their own worlds.

Half way through 2022, all hell breaks loose.

Not long after news comes through that civil war has erupted in America, several countries decide to invade Australia all at once. There is a lot of confusion, as it appears several foreign powers are fighting against each other as well against Australia’s defence forces, and alliances shift from week to week.

Brawls break out between different cultural communities in the camp, and several people are killed. The people running the Centre for National Resilience reorganise living arrangements to keep cultural communities apart. Anglo Aussies are put in the middle of the camp, with Indians, Chinese, Arabs and Africans all separated into their own segments on the outskirts. Tension continues to build however as people from different groups frequently argue and come to blows in the central Aussie area. The Aussies learn to keep their heads down. Food becomes scarce as different communities hoard resources in their own areas while accusing everybody else of doing so, and makeshift internal walls are built within the Centre for National Resilience.

A nightly curfew is established and blackout rules are strictly enforced.

Then a gastro outbreak occurs. For the first time in the 2 and a half years that the world has been in an apparent pandemic, social distancing suddenly actually matters. But it is of no use. Everybody gets gastro. The Centre for National Resilience’s sewerage system is overwhelmed but the government does not have the resources to fix the problem as they are all being directed toward the front. A foul stench pervades the Centre for National Resilience.

Then the supply trucks stop coming.

It has become impossible for traffic to move on Australian roads or rail, because any vehicle that tries is bombed or rocketed from above or hijacked from the ground.

By the time that Chinese troops finally enter the Centre for National Resilience you are a living skeleton. Piles of dead, emaciated bodies fill many cabins. You don’t want to think about how you survived the last month.

In the years that follow, the Chinese state run media informs those left alive in The Economic Zone Formerly Known as Australia that the former Australian government was murdering its citizens in the Centres for National Resilience by the millions, due to its White Supremacy. The Chinese government assures its citizens that this will never happen again, because its focus is on bilateralism and prosperity for all.

It is made very clear to you that, even as a survivor, you are not to contradict this narrative.

As years go by you get used to working permanently online, wearing a mask at all times, eating bug burgers and living in your pod. It occurs to you that the whole process you went through back in the day was quite unreasonable. If you had kicked up a stink and refused to comply with the requests made of you, the disaster which unfolded possibly could have been avoided.

Everybody was so nice.