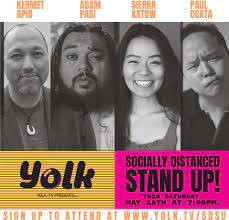 The enterprise, which calls itself “Yolk.tv,” claims to be the “uninhibited, authentic expression of Asian American identity…”

While there appear to be some Asians working for Yolk as low level writers, its most important positions are occupied by Jews.

The publication’s editor-in-chief is listed as Heather Lowenthal, a Seattle-based video producer at Parallel Productions, Inc, who does not appear to have any Asian ancestry.

The money behind the operation is being handled by their Chief Business Development Officer (CBDO) Ben Press, a Hollywood mover and shaker and Democratic Party fundraiser who serves on the Committee of the Jewish Museum in Los Angeles.

Two “LGBT” activists, Francine Strickwerda and Tracy Dethlefs — neither of them Asian — also appear to be playing an important role at the venture. On his social media page, Dethlefs repeatedly references his adopted Asian child and promotes the discredited conspiracy theory that Trump-inspired white domestic terrorists are behind the rash of violence against Asians.

Many Asians, such as commentator Vanessa Chan, have expressed confusion over “white” people seeking to control what Asians think, how they vote and what they consume. “I see the whites are still doing stuff like this in the year of our lord,” wrote Chan, conflating Jews for Gentile Europeans.

Wealthy Jews are by and large in charge of most major media aimed at minority groups. Univision, America’s most popular Spanish-language television channel, is controlled by Israeli billionaire Haim Saban.

Black Entertainment Television (BET) is owned by ViacomCBS, which is chaired by Shari Redstone, who inherited the company from her late father Sumner.

While Yolk.tv has yet to produce anything yet, its editorial line is not hard to predict.