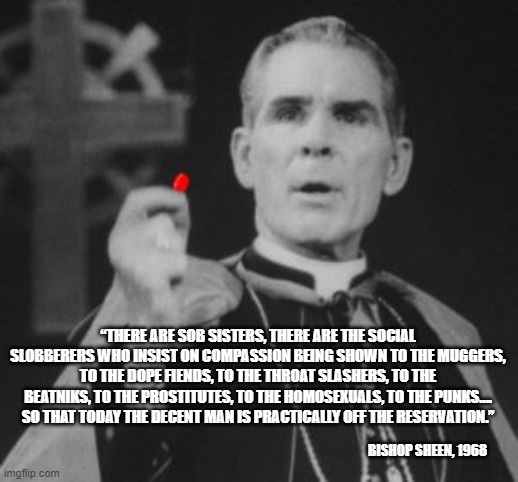 A presentation from the late Bishop Fulton Sheen on the subject of false compassion. I believe that it aired in 1968. There are some wonderful quotes and wordplay in the speech. Social slobberers is particularly memorable. So much so that I made the above meme. Too good to pass up. Oh, and everything that he warned about came to pass.

Today we are in lockdowns around the world so as to preserve the delicate feelings of the gluttonous slobs who are most likely to die of the virus. To that end the Australian government has released the following commercial, because a real pandemic needs a marketing campaign. You will notice the actress is thin, as opposed to some porky pie chop who is most likely to find themselves in the over exaggerated predicament.

It has shades of the commercial back in the eighties for the AIDS virus, with Death bowling down entire families, which was a shameful misrepresentation of the facts. But they couldn’t hurt the feelings of those poor homosexuals and drug addicts so a gigantic fear campaign was launched so as to avoid demonizing those that should have been shamed. Another form of false compassion – you shame everyone to avoid shaming those that deserve it.

Where are the Bishop Fultons of today?