It’s okay to point out that many White people in the public service and academia pretend to be aboriginal to advance their careers, because the Lying Press has now acknowledged it’s a thing: 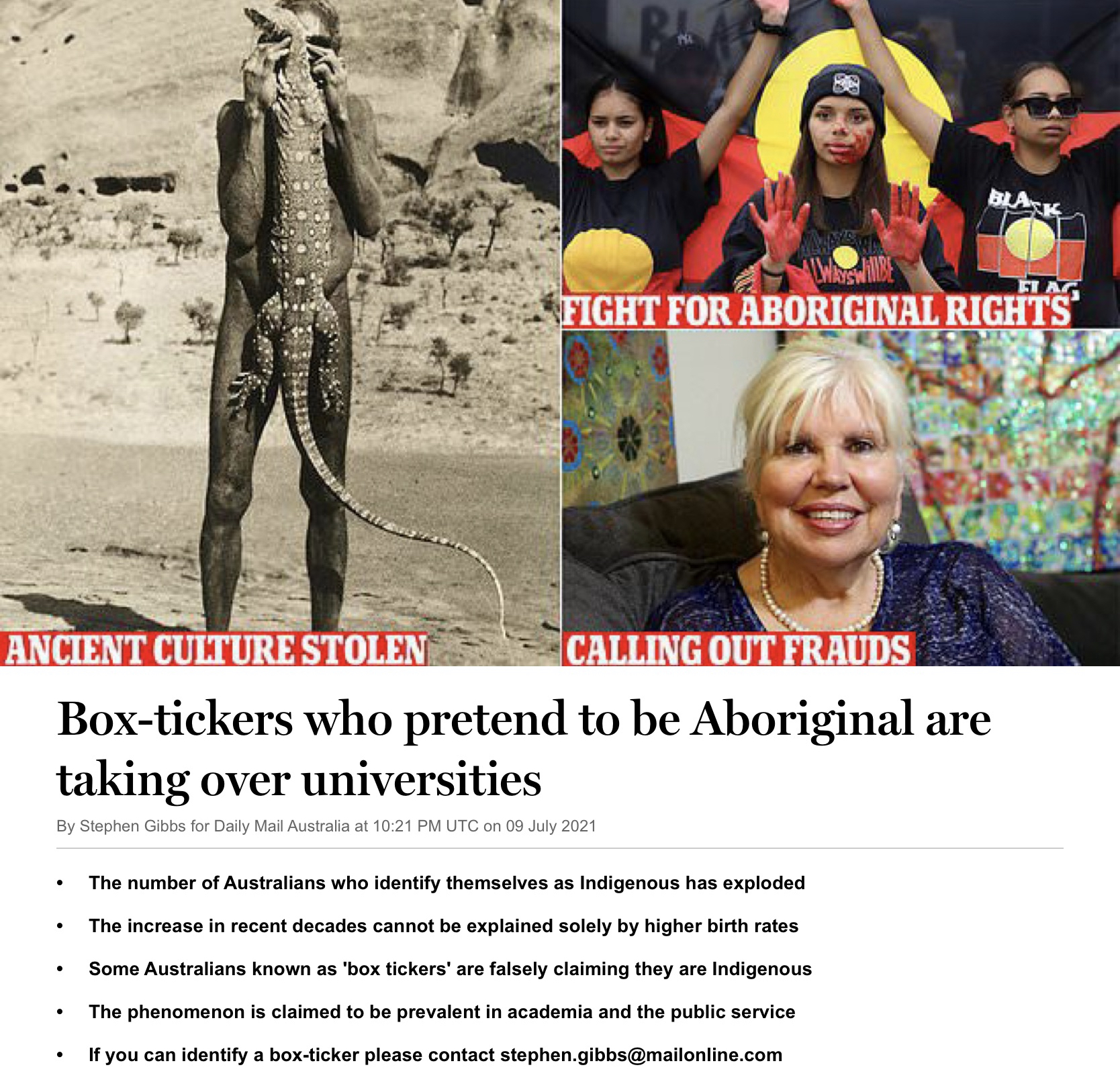 See that White chick in the bottom right hand corner? I was sure she was going to be used as an example of a fake aboriginal. Let’s see, then.

Aboriginal academic Victoria Grieve-Williams remembers the first time a white female acquaintance asked if she would support her claim to be Indigenous.

The woman was working in what was then the Aboriginal and Torres Strait Islander Commission and it would help her career if she was actually Aboriginal.

Dr Grieve-Williams, a Warraimaay woman from the mid-north coast of NSW and now adjunct professor at RMIT University in Melbourne, refused the woman’s request.

‘She actually called me and asked if I would support her in her claim to be an Aboriginal person,’ Dr Grieve-Williams told Daily Mail Australia.

‘I said to her that I couldn’t do that because I didn’t know anything about it. I’d always known her as a non-Aboriginal person.’

Ten years earlier the woman’s mother, who worked at a university with Dr Grieve-Williams, had made a point of saying her daughter was not Aboriginal when they were discussing a particular course.

‘Other people filled in the story with what was going on with her and why she wanted to be Aboriginal,’ Dr Grieve-Williams said.

‘A big reason was that she was working within ATSIC and they’d reclassified a job to be a position held by an Indigenous person. She told me that on the phone.’

The woman then sought to claim membership of an Aboriginal family group but they rejected her. A second mob did the same and she has since sought to identify with a third group that has not accepted her as one of their own. 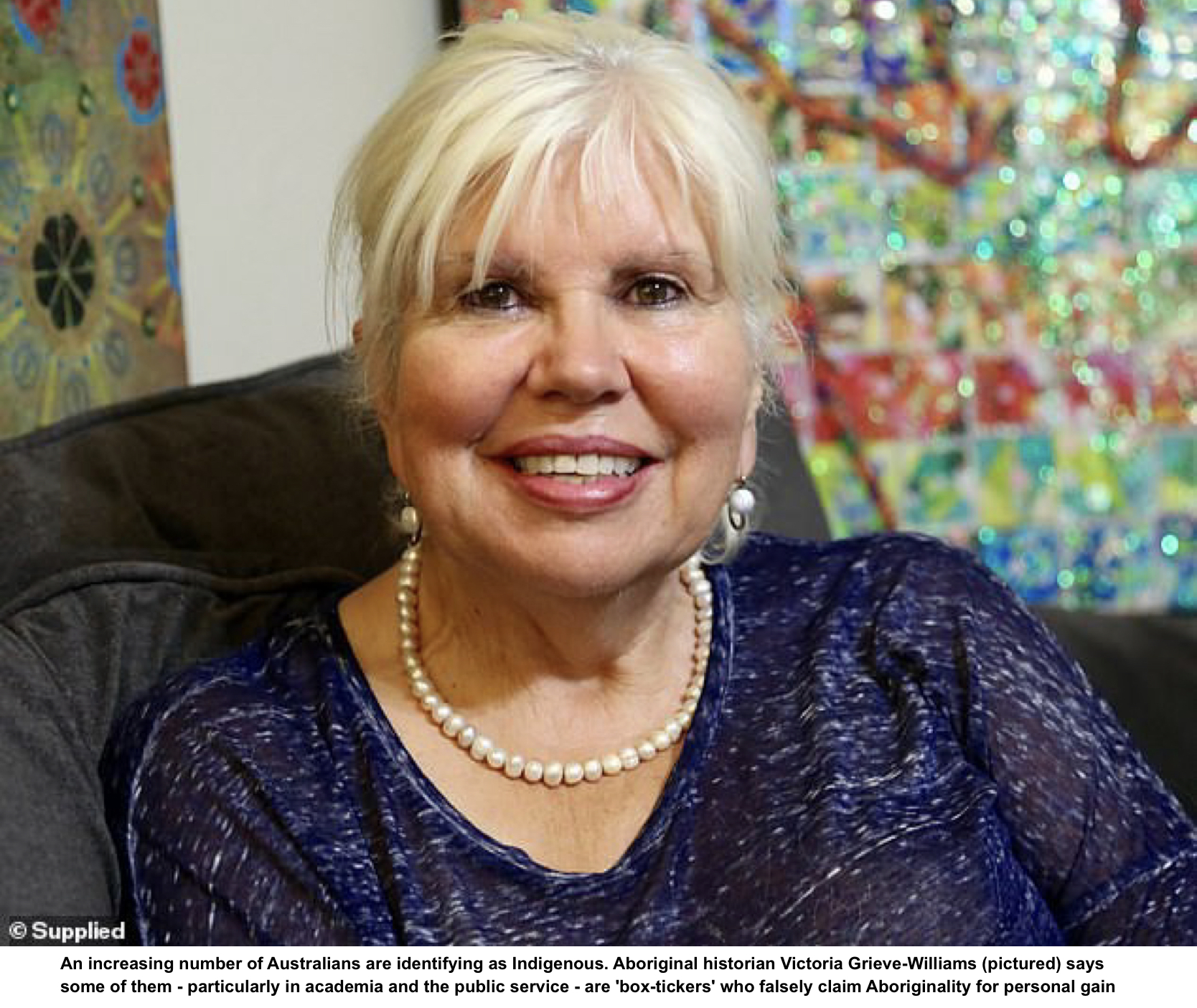 So much irony. Not just one Anglo surname, but two. And named after a British Monarch. So much cultural appropriation. So the fake aboriginal with the Anglo names is getting ahead of the curve. She realises that so many other academics and public servants have pulled the same scam as her, so as any good communist would, she is doing a round of denouncing to save her own fair skin:

The woman is now a professor at an Australian university where at least on paper she is considered Aboriginal.

Dr Grieve-Williams says the woman is one of growing number of Australians who claim to be Indigenous when they have no such ancestry.

These people are sometimes called ‘box-tickers’ – because they literally tick a box to say they are Aboriginal – but are known in Canada as Pretendians and in the United States as race-shifters.

Dr Grieve-Williams describes what they do as ‘Indigenous identify fraud’.

‘Aboriginal people are actually very badly affected by this,’ she said.

‘Universities and governments are employing so-called Aboriginal people without due diligence.

‘High-level positions, huge salaries, great opportunities through Indigenous Business Australia, all of that’s being gobbled up.

‘There’s no penalties, or checks and balances. These numbers are increasing.”

There is no way of knowing how many box-tickers there are in Australia but the practice seems particularly prevalent in academia and sectors of the public service where Aboriginality is sought and sometimes rewarded.

Please note that this is not an XYZ Poorly Labelled Satire piece. This isn’t even a serious XYZ piece. This is in the Lying Press. They are acknowledging that fake aboriginals are a thing. They are acknowledging that there are huge financial benefits associated with being aboriginal, so huge that White people are pretending to be aboriginal to advance their careers and receive economic benefit.

Furthermore, this is a phenomena which appears in several Western countries:

There is no such thing as “White Privilege” in the modern West. Quite the opposite in fact. So opposite that, as stated, White people are now pretending to be aboriginal/indigenous in order to collect the benefits.

‘The interesting thing I’m finding with my research is that Aboriginal people always recognise them, they always know they’re not Aboriginal,’ Dr Grieve-Williams said.

‘Aboriginal people have been saying, “Hold on, that person isn’t one of us” and nobody takes any notice.

Box-tickers, who are concentrated in major east coast cities, are appropriating a culture that is not theirs and taking jobs and resources meant for Aboriginal Australians.

‘It’s very surreal, particularly to a person my age because when I grew up the worst thing you could be was Aboriginal,’ Dr Grieve-Williams said.

‘Aboriginal people were so scorned and vilified. There were these nasty “Abo” jokes. I couldn’t begin to tell you the depths of racism that I experienced.

She must have been called a fake abo quite a lot, I’m guessing.

‘We were always made to feel in deficit. And now the tables have turned right around but it’s not the real Aboriginal people who are getting the benefit from all of this.’

There are particular benefits for box-tickers within academia who falsely claim to be Aboriginal.

‘The benefits are to do with status, you have a certain status when you’re a recognised Aboriginal person,’ Dr Grieve-Williams said. ‘But the main benefit is material.

‘People get promoted very quickly. The interesting thing is box-tickers, or those committing identity fraud, seem to get the big jobs.

So even aboriginal Privilege is White Supremacy. You can never win. The only way we will win is when this jewish system is utterly destroyed.

I stopped reading there. Like all women she just can’t stop talking. Anyway, I’m sure the jews will 18c her any day now.