If an individual grabbed a police officer by the throat, what would happen? Would they just take it, or would they respond with the force that Thomas Sewell responded with?

We should all know the answer to this; another police officer would immediately intervene and disable the attacker, potentially drawing their firearm threatening deadly force.

The charges against Thomas Sewell are so blatantly anti-White and political you would have to be either a traitor or an idiot to believe otherwise. 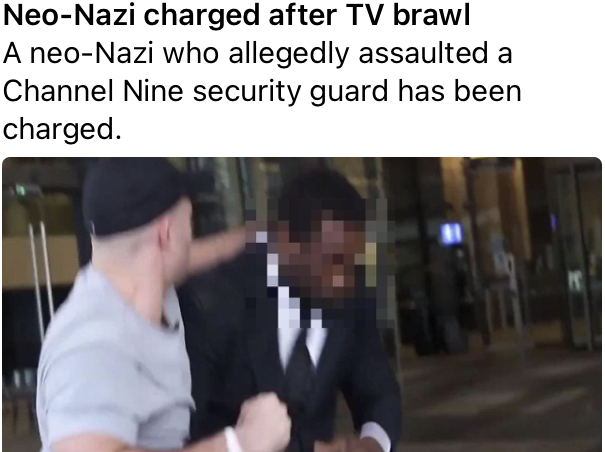 Despite being a very clear case of self-defence, Victoria Police have charged Thomas Sewell with affray, recklessly causing injury and assault.

This is yet more proof that Victoria Police and the government have no interest in rule of law, or equality before it.

He is being charged for his race and ONLY his race. If the races were reversed here the security guard would have been sacked and the non-white would have been touted in the media as a hero.

Will this foreigner who assaulted an Australian man be charged, or have any consequences whatsoever? Of course not, because the system is anti-White to its very core.

Corruption in Victoria (and the West) is endemic and always anti-White, because it’s jews who truly rule over us.

Victoria Police are an enemy of the Australian people who do not care about preventing real crime, or punishing real criminals, but go out of their way to charge white men for daring to be White and not ashamed.

What a disgusting act on their behalf, the only choices we have are to remove ourselves from this jew system and create our own, and to remove the ruling class from power permanently.

You can find Matty’s Modern Life on Telegram and YouTube.