Most patriots in America and Australia see Trump as a traitor who lied about the wall and promised to stop Americans being replaced by the 3rd world, but who has done little to reduce the inundation. Many patriots agree however that so far Trump has prevented his ‘money masters’ from getting their wars with Syria and Iran, so for that alone he has been a blessing to the world. If a Democrat or Neocon became president we would already be in World War 3.

Some will argue that Trump has thrown his supporters who got him elected under the bus by not reversing white genocide policies, and not preventing government funded or supported carriage services such as Google, Facebook, Twitter and Youtube from illegally censoring and manipulating their algorithms to hide political content that they do not like while also illegally acting as Publishers. Trump had four years to prosecute them but he didn’t even try. Now most of his supporters have been banned or censored off the internet so his millions of volunteers will no longer be able to help him get elected.

Lucky for Trump, he has no competition in this coming election.

Although Trump’s broken promises have upset a lot of his supporters who now know that he will say anything to get elected, he has also done a few good things. We all know how power dynamics work and that being a President doesn’t necessarily make you ‘All Powerful’. Look at Obama. He did nothing that his investors and handlers didn’t want him to do. Oh and he won the Nobel Peace prize for being half African before he even took up the job. Then Obama set about tripling drone attacks as instructed.

Before you write off Trump as a tool for his owners too, just remember that he has thrown us lots of tasty morsels. One man can’t do everything, especially if the public are too ignorant to run with the ball. One thing that Trump does well is sets the conversation and legitimises concepts that the Fake News media have for years made out of bounds, to reduce the Overton Window in order to hide their crimes. If ‘the most powerful man in the world’ can talk about issues and concepts that patriots around the world speak of in echo chambers, then it’s time for us to promote them properly.

Have you ever heard an Australian leader speak of Australians in a positive way? Did Gillard, Rudd, Turnbull or Morrison ever say that being a patriot and caring about your nation is a good thing or that Marxist violence and subversion is a bad thing? Never! Australia is way behind but as more and more Australians hear Trump’s speeches and then come to us for answers we must be ready. One day a great man like Anning will come along with the charm of Hawk and half the money of Turnbull. Australia will be reborn and once again become the envy of the world.

Can you imagine an Australian leader speaking like this?

Have you ever heard an Australian leader expose the Cultural Marxist subversion of our schools, universities and government offices?

Obviously, anyone who reads XYZ.net.au is well aware of Critical Race Theory and other aspects of Cultural Marxism, but now is the time to promote the awareness of this subversion in our community. The Lovely Porridge from Ruination Media has created an award winning video exposing the crimes of the antiwhites in our schools. Please post this video far and wide on every school forum board so parents and teachers will be aware of these destructive indoctrination programs. 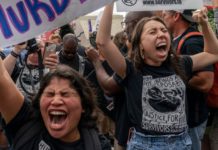