The reminders that we are not young and free are coming almost hourly.

This latest episode of totalitarian lunacy reinforces the point that it is illegal to meet with others behind closed doors, whether it is for a BBQ, listening to a DJ set, or to make plans to overthrow the government. There may be more to the story of which this video shows barely a minute but it doesn’t really matter. Either way, it is very convenient for our overlords. 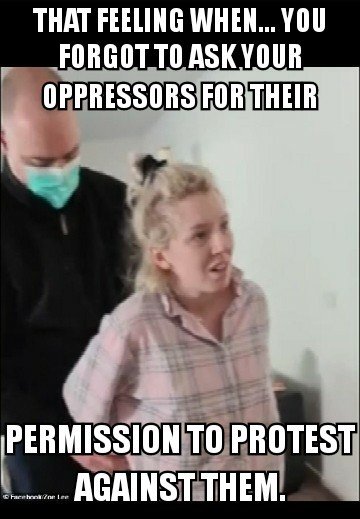 There isn’t much else we can say on this which we haven’t said already, so I’ll leave the honours to commenter James, who regularly has something sensible to say:

“Have to wonder how much of this has to happen. How many times it has to be seen by the normies before they realise this is it. This really is what they’ve read about and seen in movies that happened in other countries over time. Realise it’s really happening now.

“They still think it’s different because there’s a moral reason this time. But that’s always the case. There’s always some great “moral” reason.

“Tyrannical oppression doesn’t start once it’s obvious to the world. It starts when the very first person’s denied liberty and justice.”