Sam Newman has for decades infuriated the politically correct establishment by remaining wildly popular despite the best efforts of Marxists to brainwash the masses.

He is a constant reminder that it is only the small minority who control the official channels of communication who subscribe to the globalist agenda. The rest of us not only oppose it, we hate their guts because we understand that the globalists hate our guts and they want us dead.

In a video posted to Instagram, a black man attacked an unsuspecting white man with a brick. I bring up their skin colors because it was posted with a hashtag that reads “WhiteLivesDoNotMatter.” https://t.co/9DJeT95tRd pic.twitter.com/0OooUTGyeM

We are fortunate at a time like this to still have a cantankerous old contrarian who won’t keep his mouth shut. 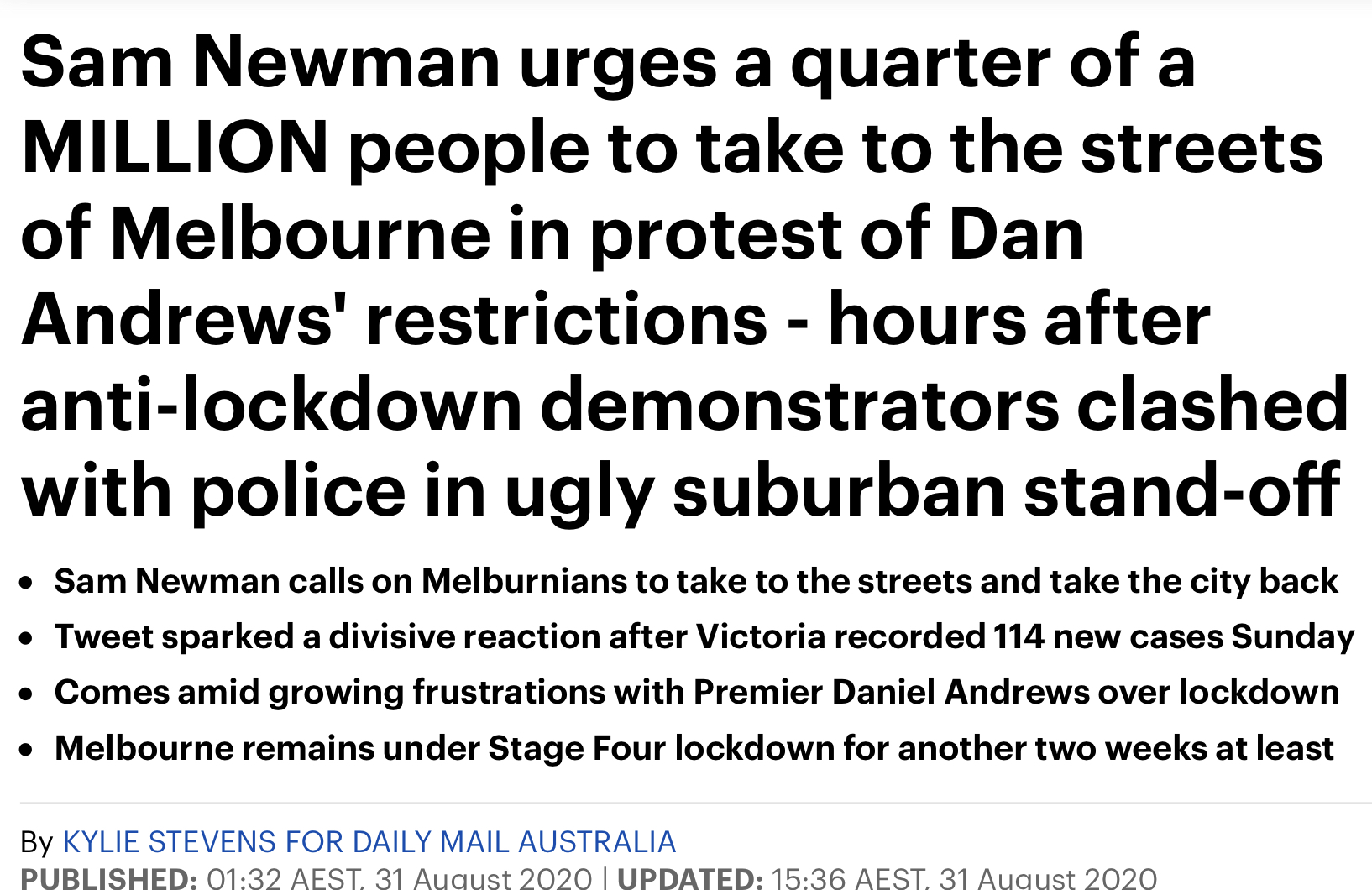 Controversial media personality Sam Newman has called on fellow Melburnians to take to the streets to protest Stage Four lockdown.

Tensions over Victoria’s restrictions boiled over once again when anti-lockdown protesters clashed with police in a dramatic stand-off in the city’s north on Sunday night.

The extraordinary scenes prompted the 300-game AFL champion and former Footy Show host to weigh in on the debate.

‘Of all the protests that we have put up with, how about a quarter million of us gather in the CBD to take the City/State back, before EVERY previous march will have been pointless,’ Newman tweeted on Sunday night.

‘And hopefully a state day of coordination. Any takers? #StateofSurvival.’

After one Melburnian suggested Newman had ‘incited a riot’ with his comments, he added: ‘There’ll be no rioting. No looting. No arson. No violence. Just an expression of desperation for our sanity.’

The tweet sparked 1000 likes and hundreds of comments on a day Victoria recorded  114 new cases and another 11 deaths.

The key word here is “coordination”. The Victorian NKVD cannot allow a popular figure to contradict The Narrative and propose coordinated resistance via a communication channel that gives him access to thousands. If anybody could get 250,000 people on the streets, it’s Sammy Newman. Hence the swift response. 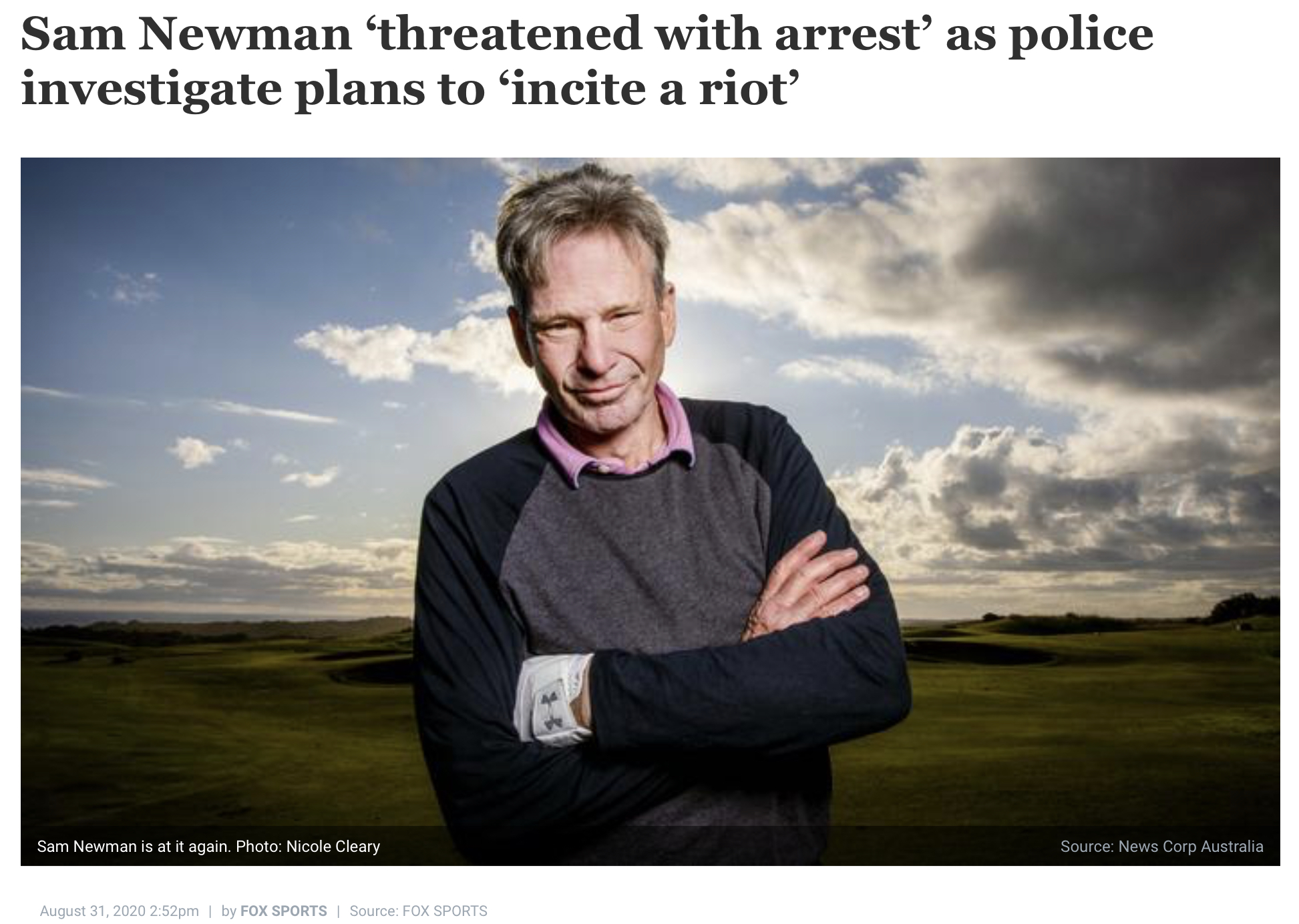 Victoria Police condemned Newman’s comments and said it was expecting to make more arrests in the coming days.

“Victoria Police is actively investigating those responsible for co-ordinating and encouraging protest activity on Saturday,” they told 7 News.

“Organising and participating in this protest would be a serious and blatant breach of the Chief Health Officer’s directions and jeopardises the health of the entire community.

“Those still thinking of attending the CBD to protest can expect a swift and firm response from police.

“We have no hesitation in issuing $1,652 fines to anyone breaching Chief Health Officer directions or making arrests on the day if necessary.”

The offence of incitement occurs when a person incites others to act in a way which will result in an offence.

The information war is currently in full swing here in Australia. A handful of people fortunate enough to have roles in the media – and the access to the masses that goes with it – have been brave enough to counter The Narrative. We are not (yet) at the stage where our enslavers can quietly icepick them and airbrush them out of the history books, so the strategy for now is to paint them as crazy and to present us as a tiny minority.

It is why I have repeatedly attacked fat pig Magda Szubanski, because Pete Evans is getting the same treatment as Sam Newman. Don’t be surprised if the authorities invent a reason to put Evans away.

As for Sam Newman, if they arrest him, they really will get a quarter of a million on the streets.