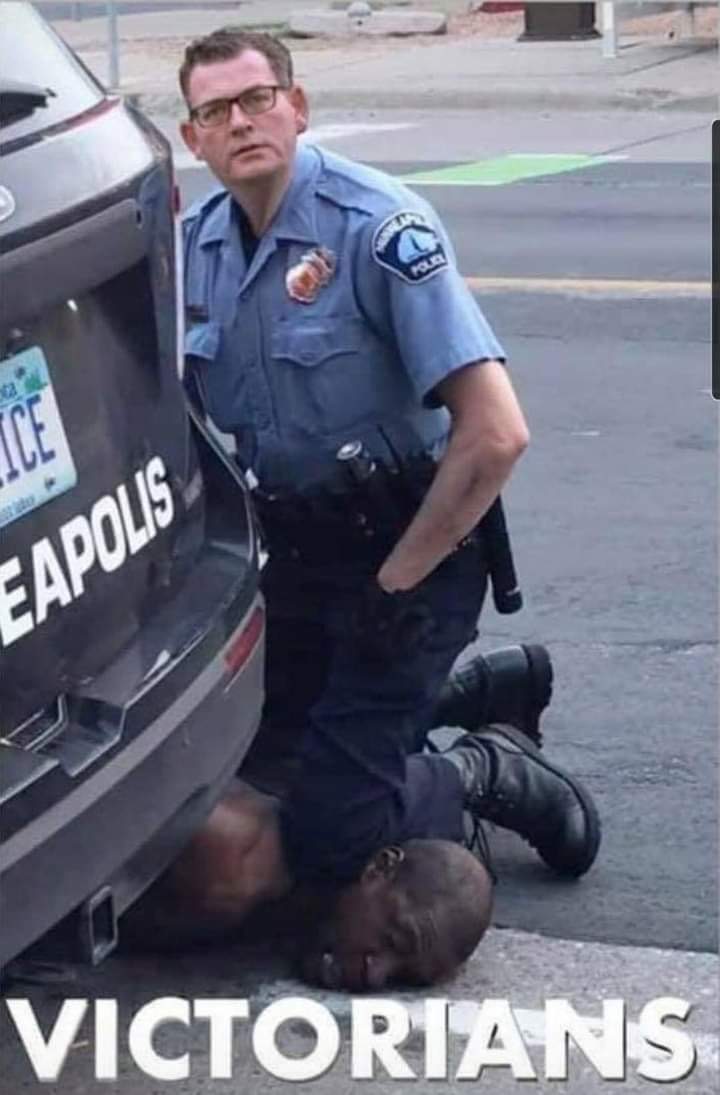 A number of readers have left comments and sent me emails expressing bemusement at the hysterical authoritarian overreaction to the Chinese sniffles in Victoria specifically, but Australia in general. While the state of Victoria is undoubtedly the epicenter of jack-booted lunacy, the rest of the country is not doing too well either in the face of the great plague that never was. From nobody being allowed in or out of Western Australia for months to patients attempting to use hospitals being turned away as they are from the “wrong” state, the list of mindless overuse of powers is a woeful indictment of Australia as a society.

These two threads at Catallaxy Files give a suitable taste for what is going on at the moment. There are many more example posted in the comments. Pay particular note of the number of videos showing Melbourne police enthusiastically adopting behavior which could be labeled as ‘literally Hitler’ without too much of an over exaggeration.

The world is laughing at us.

This used to be a joke …

So what is going on? Is this some strange new turn of affairs or has Australia always been this way?

Australia has held a somewhat mythical status in the world for the last few decades at least. Australians are seen as easy going, funny and extroverted, the sort not to take anything really seriously and just get on with the important business of enjoying life. In the years that I spent working around the world as a rafting guide, being Australian was a huge bonus play. The general reaction from people when you said you were Australian was one of great enthusiasm. Everything that Australians did was great; our accents were great, our lifestyles were great, our country was great. Why, we have kangaroos and koalas and miles and miles of beautiful beaches. Everyone wanted to live in Australia. It was indeed the place to be.

But to be honest, even though I benefited from this in many ways, I was always slightly bemused at the constant praise and attention for having been born an Australian. Because the reality back home for me was somewhat different. I knew Australian society as one that was consumed with being orderly; with obeying the rules, no matter how ridiculous and self defeating they may be. But I also knew it as a place of violence, where the wrong look in a pub could instantly lead to a gratuitous bashing. Among all of the wide range of countries in which I have lived and worked, none harbors the capacity for sudden violence in a mundane setting quite so much as Australia.

This is somewhat of a paradox but understandable when you consider the nation’s origins. For the first 100 years of its life, Australia was intended to be a place of punishment. The worst elements of Great Britain were sent there under pain of death, and their treatment was barbaric. The brutality was not restricted to remote outposts such as Port Arthur or Norfolk Island. The city of Sydney was by all accounts a rotten and squalid hellhole for convict and free settler alike.

The very best history book concerning this period is The Fatal Shore by Robert Hughes. I recommend this book to anyone who seeks to understand modern Australia. What is happening in Australia right now is merely a continuation of its curse of inception. The convict stain can never be washed away as it is in our very DNA. Australians will grumble no end at the absurdity at what they have to endure, but will nevertheless do their best to follow the rules. The jobsworths in the lower ranks of government lord it over their working class compatriots for the simple reason that they have no desire to return to the great unwashed. The upper classes know upon which side their bread is buttered and move accordingly. And the great unwashed are simply the great unwashed; those that must be tolerated while we still have industries that dig holes and build houses for foreigners.

A popular television program in many parts of the world is the Australian Border Patrol. It shows airport staff intercepting bemused foreigners who were under the false assumption that items such as your personal phone are private. It is no surprise that many overseas viewers assume that the program is a complete exaggeration, when in fact it is a precise rendering of what awaits the visitor when they land in the country.

Australia is an immature society, frightened by its own shadow and desperate to show the rest of the world that it should be playing with the big boys now. Those in charge are there not by merit but by having benefited from the vast mates network that does its own part in keeping alive the hidden class divisions that fracture Australian society across multiple fault lines. They have no real idea what they are doing and so they must do something, anything, so as to be seen to be leading the charge.

The ironic thing is that Australia is probably the least free country in the Western world. And this only becomes apparent when a native Australian spends a good amount of time away from the country, as I and many of my friends have done. We look at what is happening in Australia at this moment with bemusement but also with understanding. It’s not that this flu crisis has taken away Australians’ freedoms. They never had any to begin with.