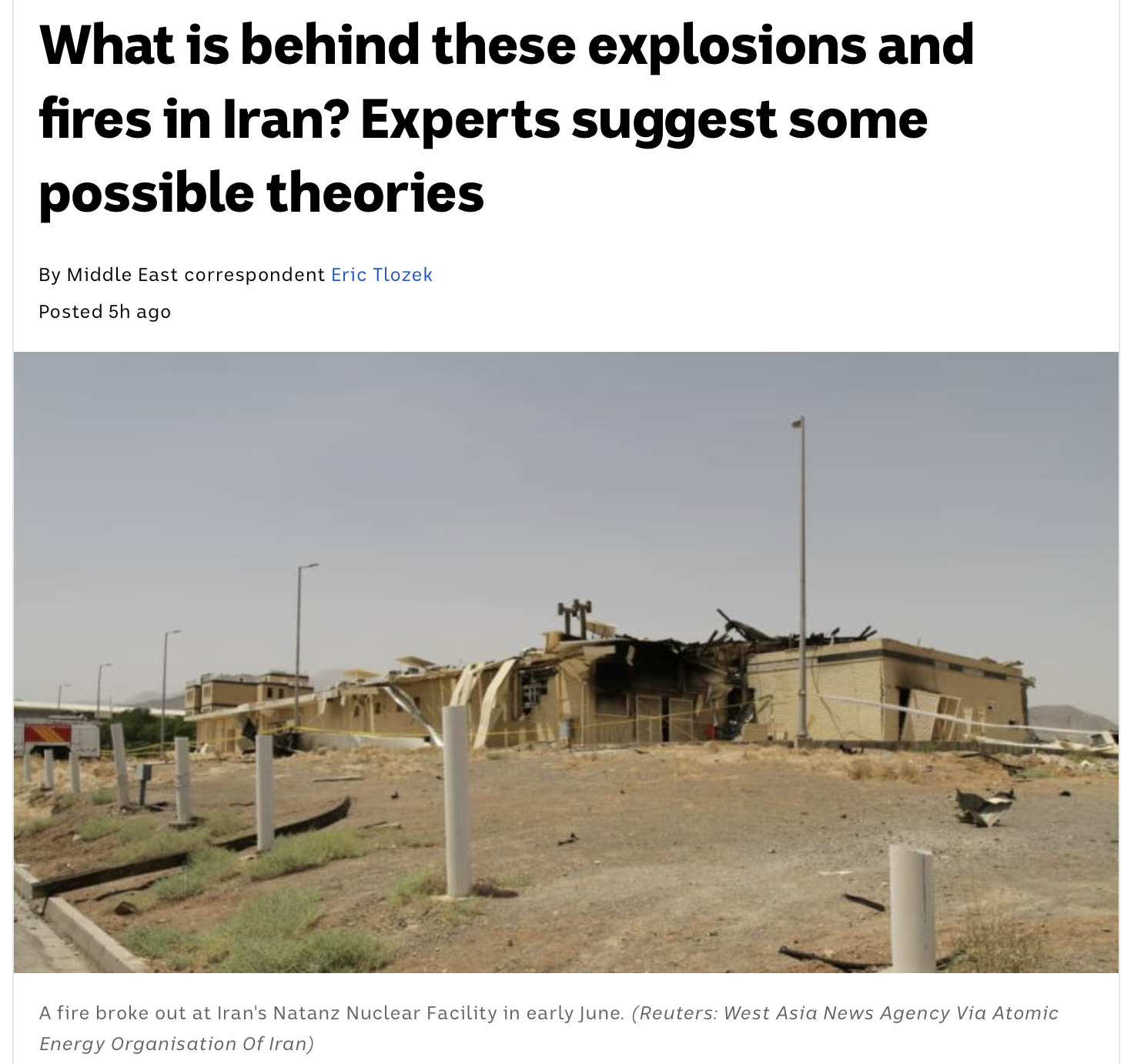 It is a well established fact that the ABC is one of the most antisemitic institutions in the country.

First, it was forest fires.

Then a missile factory.

Next was a heavily fortified, highly restricted, underground nuclear enrichment facility. Then power stations, a port, a health clinic and a petrochemical plant.

For weeks, things have been blowing up or catching fire in Iran.

The two most significant incidents were a June 26 explosion at Khojir, near Tehran — a liquid fuel production site for the country’s missile program — and more recently, a blast deep underground at the Natanz nuclear facility on July 2.

Most of the explosions and fires could be due to Iran’s poor management of infrastructure and its deteriorating economy, which has been squeezed by sanctions and a mishandled coronavirus epidemic.

The article details plausible reasons why mismanagement could be a factor in the spate of explosions and fires in Iran’s infrastructure, before pivoting to America:

“The recent fires have had nothing to do with the cyber attacks,” he said in comments published on the ministry website.

“It would be perfectly natural to say that the US government will be the prime suspect for any cyber attack against Iran hereafter, unless the contrary is proved.”

The real motive for this hit piece is now revealed:

But the explosions at sensitive military sites are different.

The Natanz facility is critical to Iran’s nuclear program — especially the country’s recent flouting of uranium enrichment limits under the Joint Comprehensive Plan of Action (JCPOA), known as the Iran nuclear deal.

Iranian officials suspect the country’s arch-enemy, Israel, was responsible and there are indications they are right.

It has triggered some speculation within Israel that the official quoted was the head of the external intelligence agency, the Mossad.

The ABC is quoting Iranian propaganda without qualification and giving oxygen to conspiracy theories about Mossad. This is Mint Press News tier.

The explosion also came not long after Israel confirmed it shut down computerised traffic management systems at a major Iranian port in retaliation for an Iranian cyber attack on its water treatment system.

Israel doesn’t normally confirm attacks against Iran, but recently seems to be more willing to take responsibility, as part of a policy of increased deterrence.

It also could be taking advantage of weakness, division and distraction within Iran’s Government.

We should expect better from the national broadcaster. Compare this analysis:

There are two key deadlines looming for Iran’s opponents: the end of an international arms embargo in October and the possible defeat of US President Donald Trump in November.

But there has been speculation that Israel — and perhaps certain US agencies — are using the explosions as a way to try to prevent a possible future return to the JCPOA.

“The argument is that they want Iran to make a major miscalculation,” Atlantic Council’s Iran analyst Holly Dagres said.

“If we’re going to say this is a Trump Administration joint Israeli operation, then perhaps they are hoping that this miscalculation is so dire that if there’s a Joe Biden presidency, then there’s no going back to sitting at the negotiating table for the current Iran nuclear agreement that the US withdrew from.”

With that of the Daily Stormer on the same topic:

The other thing is this: Israel is likely worried that if Donald Trump loses, there will be more Islamic influence in America, and this will make it harder for them to start a war or even do sabotage. Blowing these things up appears to suggest that even if they can’t start a war before the election, they simply want to set them back.

I wish someone would explain to Trump that Israel is behaving as if he is going to lose. That might perhaps wake him up to how dire his current situation is, and maybe think about firing Jared Kushner, who he apparently keeps around for Israel’s sake in the first place.

It’s like they just read Daily Stormer articles and replace the racial slurs with dogwhistles, and talk about “experts” and “theories” to lend a veneer or respectability. As esteemed anthropologist Sherry Sufi has noted, criticising Israel’s preemptive use of force against those who wish to wipe it out is antisemitism. It is unclear whether Dvir Abramovich has tweeted about this yet.