Out in the Australian bush we are used to stocking up with the luxuries and living off the essentials that the land and rivers provide. A week, a month or 6 months in isolation is just normal life for us. We can even grow our own tea and coffee if we want and brew our own alcohol from honey or mangoes. For toilet paper we use scrunched up main stream media newspapers or water. It’s not that hard really.

Apparently this lock-down is supposed to last for another 6 months and no-one knows how long supermarket food supplies will last, but if you stock up you are labelled a ‘panic buyer’. Us folk out in the bush are fine because we have an abundance of food sources. For us fast food is a kangaroo. The government knows that we will be fine so now they are restricting the sale of ammunition all over the country. Do you know how hard it is to get fast food with an axe? They know that if they leave us be, then we will wait for the Multicultural enrichment riots and fires to end, then come to town to rebuild civilisation much like we did when Rome self-destructed.

So the question is. Are you poor bastards in the cities prepared at all? Now I’m not going to give hunting and trapping advice but I suggest you take out a piece of paper and write down all your food sources for when the shops close. You could be someone else’s food source so your gates will be locked. Create an inventory of everything you can eat without leaving your property. It might look like this:

Divide the total by you and your dependants (lets say 3) then by the number of meals per day you would like (lets say 2).

So now you know that you can survive for roughly 11 days before you start checking out that fat neighbour who you never really liked anyway. Be aware that your neighbours might run out of food before you do. I’m saying this as a joke obviously but it would be advisable to put history into perspective. Australians have been cannibals for longer than we were not. Even the escaped convicts resorted to cannibalism when they were hungry, and look how Australians cheer and head-bang while we sing the cannibal convict song. Chilling really isn’t it?

You will not find this book in the library anymore but Carl Lumholtz was the Norwegian naturalist who spent 4 years in the jungle documenting the Queensland Pygmies and cannibalism amongst other things. 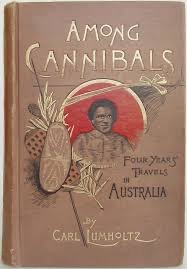 We now have a Tree Kangaroo named after him, and you thought normal kangaroos were hard to catch!

Interestingly, anthropologists believe that the dingo is a relative newcomer to Australia and were possibly brought here by Dravidians such as the Alghori from India or Asia. This explains why the Thylacine went extinct on the mainland but not in Tasmania. Even today Indians are frightened of the Alghori because of their cannibalism and disregard for social norms.

Here an Alghori is doing a cannibal ceremony while smoking marijuana to summons the spirits and the CNN reporter will not STFU! The Alghori is getting angry, he bludges some alcohol off the reporter then tries to rip his head off and urinate down his throat. If you think I’m making stuff up. Just watch the video.

Unfortunately the findings of physical anthropologist’s do not fit the Globalists’ narrative so we don’t know for sure where dingoes came from. In this next video you will see a cannibal from PNG explain that he hasn’t eaten any whites because there aren’t many around where he lives. Notice the dingo walking around?

Globalist Marxists like Vladimir Lenin, Gangrich Yogoda and Lev Bronstein (Leon Trotsky) went to Russia and imposed a famine on the Ukraine, starving around 10 million white Christians to death and then flooded the country with other races so they could break the National spirit of the Ukrainians. Sound familiar? Guards were stationed on the cemeteries to prevent people from eating the dead.

Normies don’t know about the Holodomor, the starvation, the cannibalism because the people who did it still control your media and the 10 million victims where white and Christian just like you. Funny how that works, hey? Wait until you discover how many white Christians they starved and butchered in Russia as well. Start with The Gulag Archipelago by Alexandr Solzhenitsyn. Actually don’t bother. It’s probably too late anyway.

News flash, the same Globalists are using the media to fatten you up with junkfood and prevent you from exercising in parks and on the beach. What happens when the trough becomes empty and the pens are locked down while the big truck starts backing up to the loading ramp?

One thing we do know that’s comforting is that, if you break free you only have to run faster then the slowest person to get away, and that is not hard these days.