Most patriots are not used to seeing real coincidences without echoes but yesterday we had an uncoordinated coincidence. First came a video from a well known American nationalist RamzPaul, who says every day that he wants nationalism for everyone including white people. If Japan can have a Japanese state and Israel can have a Jewish state then why can’t Finland have a Finnish state?

Well according to the Globalist thought police that is a radical ‘hateful’ ‘right-winged extremist’ position to hold because Finland is a white country and, don’t you know white people can’t have their own state or support their own interests or protect their own children?

Next came an article from ‘Their’ ABC quoting ASIO boss Mike Burgess repeating the tired old line that ‘right-winged extremism is on the rise’. Any observant reader noted immediately that he deliberately forgot about ‘left-winged’ extremism even though groups such as Antifa openly call for and commit violence regularly. With his credibility in ruins he struggled on to mention the Chinese infiltration of Australia but failed to let on that with a million Chinese living in Australia it is vertually impossible to know who is a Chinese agent, and with their wads of cash it is also impossible to tell who is a Chinese asset amongst Australians.

Peter Dutton weighed into the conversation in true Cuckservative fashion, claiming that both ‘right-wing Lunatics and Left-wing Lunatics’ must be dealt with. This heresy got him an instant write up on SBS with a close up mug shot of his head plastered beneath the headlines. 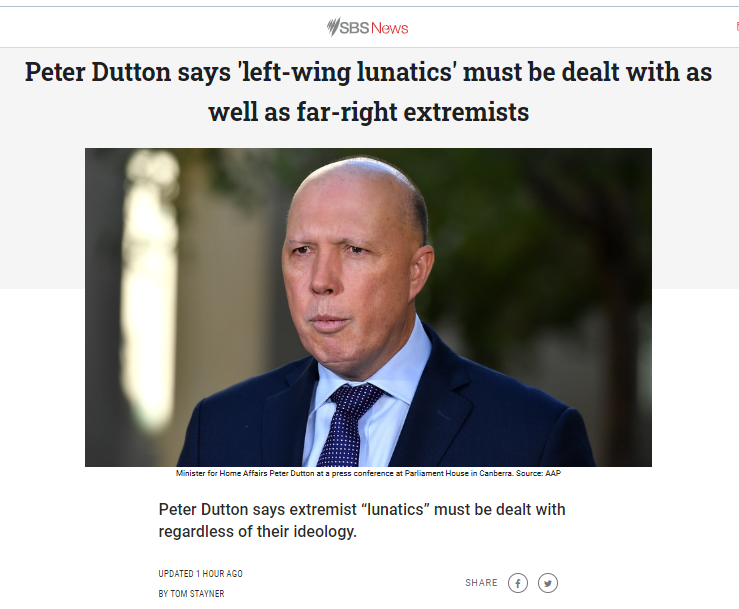 How long will SBS bully Peter Dutton over his head shape?

After reading through the articles it should be very clear that patriots and Australian nationalists have become the new bogey men, and a concerted effort is being made not to understand why an Australian would want to protect Australia but to smear, vilify and catch a baddie. Most patriots can recognise what we call ‘Fed Posting’. If we see ‘Fed Posting’ on our channels we try to delete them ASAP. ‘Fed Posting’ is very real and no Australian advocate should ever fall for it. RamszPaul shows real life examples of ‘Fed Posting’. He also shows that the left are also targeted by Feds if they deviate from their useful idiot status, and start rubbing their Globalist masters the wrong way like they did with Occupy Wall Street.