In case you haven’t seen it already, British Patriot and Nationalist Activist Mark Collett recently sat down with the Israel Advocacy Movement for a debate on ethnic Nationalism.

The topic of the debate was “Zionists should support a white ethnostate,” so as you can imagine the discussion got spicy. So spicy in fact that the hosts took the video down after getting their butts handed to them, but not before several individuals downloaded it and were able to put it up on their own channels.

(((YouTube))) weren’t happy that four of their own were so thoroughly humiliated in debate by one English bloke, so they took them all down as well. Too bad for the establishment the debate is still available on BitChute under several mirrors (last check there were nine on BitChute and I have a copy of the debate on my PC). 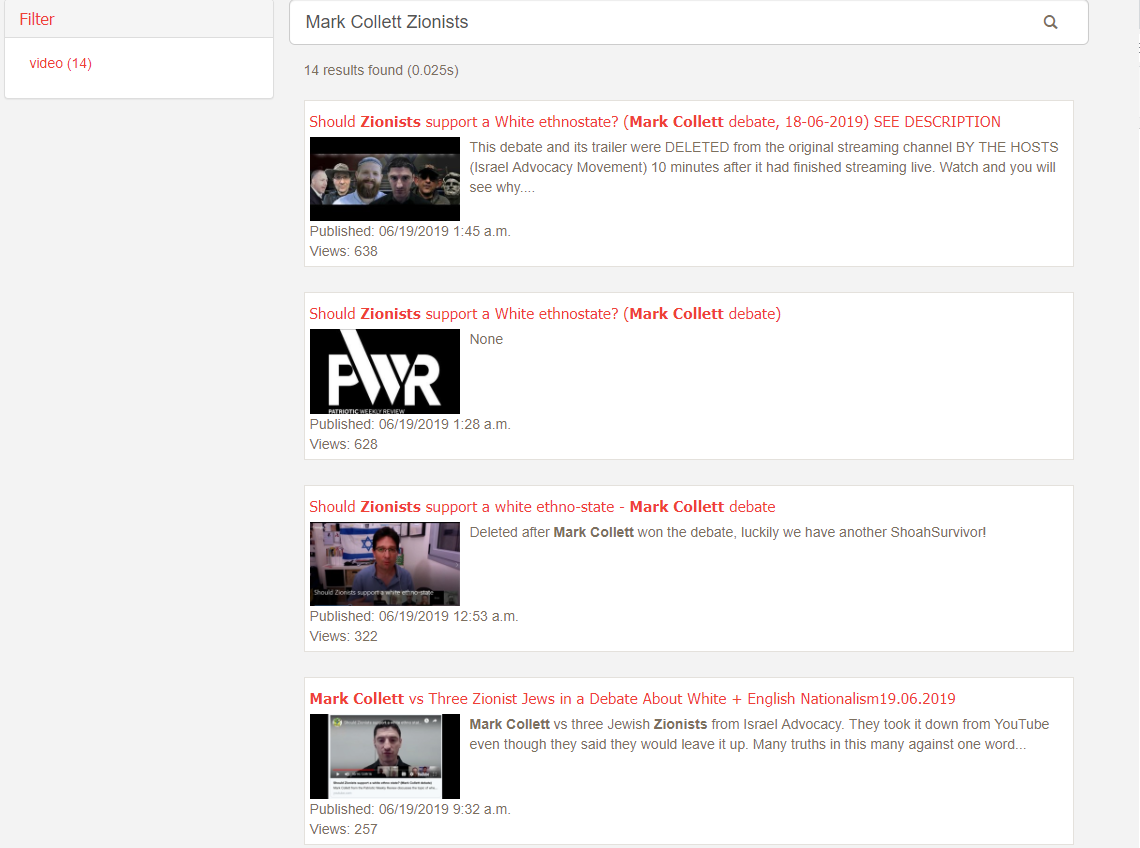 It was so bad for the ZioShills that one of them, the extremist Lefty Jew, rage quit halfway through after repeatedly calling Collett all the names in bigotry bingo. His opening statement invoked Godwin’s Law and it was downhill from there. You can see the triggering in his eyes and hear it in his voice. It’s pure gold (geddit?).

Throughout the debate Collett remained calm and on point, presenting his arguments clearly and concisely. In response, his opponents threw insult after insult, one of them even attacked his appearance and said he has “big Jewish nose.” 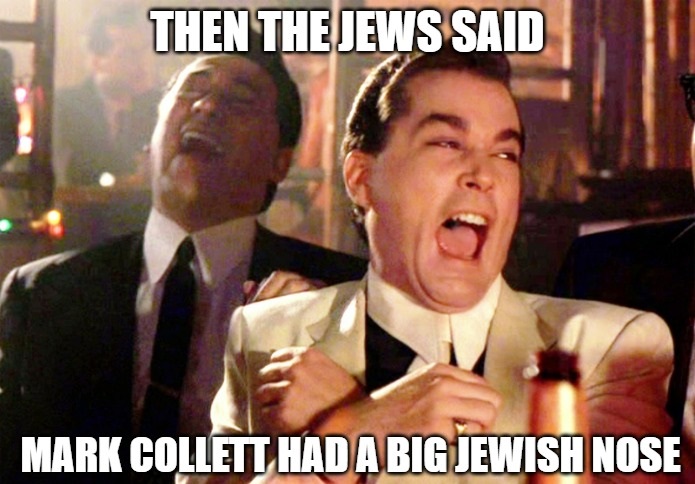 It was hilarious watching them so desperate to attack his character, including the clichéd accusations of wanting all Jews thrown in camps and exterminated. Meanwhile he just returned serve with strong arguments and evidence, to which for the most part they had no answer. The Based Rabbi even admitted what we all know, that Jewish people dominate media, politics, academia and the rest of it.

His argument was, predictably, that Jews got there by being amazeballs and the greatest people in the history of all peoples, “superior” to others you could say. Admitting that it has more to do with in-group preference and nepotism wouldn’t fit the “Jews are uniquely great at everything” narrative. Not that we should begrudge his position, he has a right to think his people the best, as Mark argued we have the same right to think our people the best as well.

They had no counter to this point.

Aside from the based Rabbi half-attempting an intellectually honest discussion on occasions, it was mostly an insult, strawman and character attack fest.

It would have been nice to watch a reasonable debate where all individuals respected their opponents and refused to make childish personal attacks. Alas, that didn’t happen.

Who knows why? It’s a mystery. 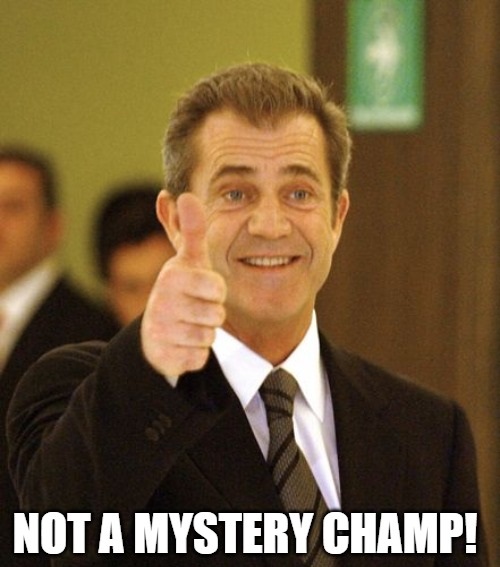 Naturally, other Jews are not happy that this debate took place at all. They criticised the Jewish Advocacy Movement for even speaking to someone so horrible. 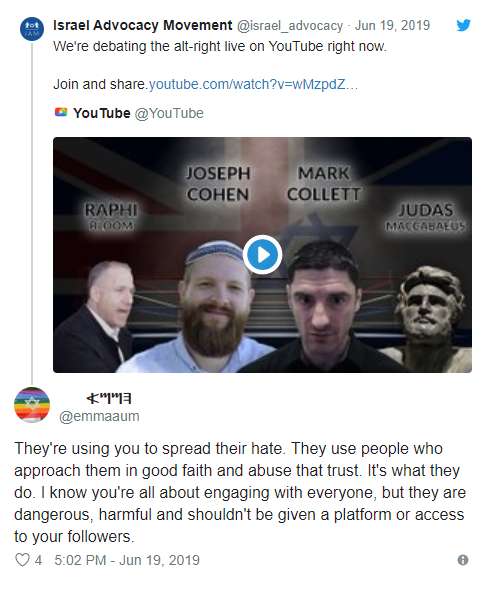 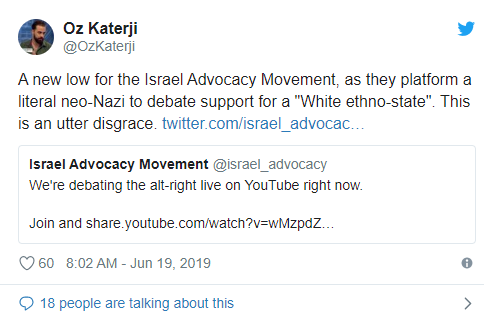 ​How an obscure lobby group with barely 10,000 YouTube Subscribers and 7,000 Twitter followers is “platforming” a high profile Nationalist with nearly 100,000 YouTube subscribers (despite blatant censorship), who’s been on the scene for decades and even lead a political party to election victories, is anyone’s guess.

The Jewish Chronical spun it as the worst thing since cookie-monster:

Last year, the Anti-Defamation League labelled Mr Collett a “white supremacist”. According to anti-racism campaigners Hope Not Hate, he has claimed a “white genocide” is taking place in Britain.

Raphi Bloom, from North West Friends of Israel, took part in the debate but said he was “shocked by the extreme level of antisemitism coming from the far right” and went to leave “once it descended into the fantasy world of Jewish conspiracy theories”.

“I believe very strongly in taking on and challenging antisemites and those who hate Israel wherever possible in public forums. I have done this with Miko Peled and regularly appear on RT and on other media to debate and oppose those who implacably hate us,” he said. 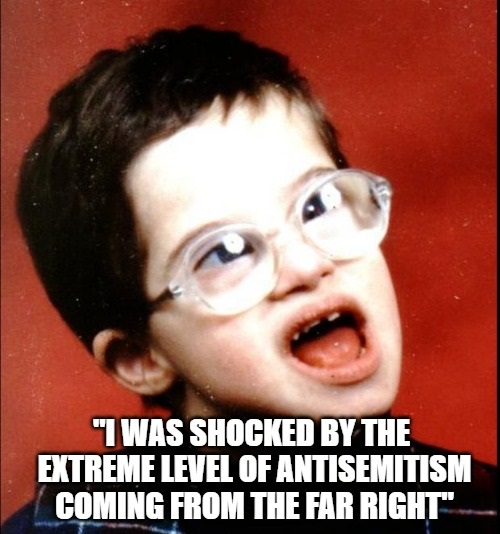 This shows, once again, why telling lies should be against the law.

Mark Collett does not “hate” Jews, he made this clear during the debate and never has he said otherwise. Raphi Bloom, the triggered Lefty extremist who rage quit, is now a proven liar. Collett should have grounds to sue both the newspaper and Bloom for these lies and the effective call to violence against him.

Also note, the Jewish Chronical cited two known hate groups, the ADL and Hate not Hope, as supposedly legitimate authorities. These genocide-denying anti-whites have no place in any debate or discussion and using their opinions to support your argument does nothing but discredit it.

The Times of Israel UK, Jewish News, was also very upset that anyone would dare take on someone so articulate. After setting him up as the worst person since Addy H, they had this to say:

He claimed his critics accuse of him being an antisemite, and “when it comes down to the final building block in your defensive wall, it’s always the Holocaust.” 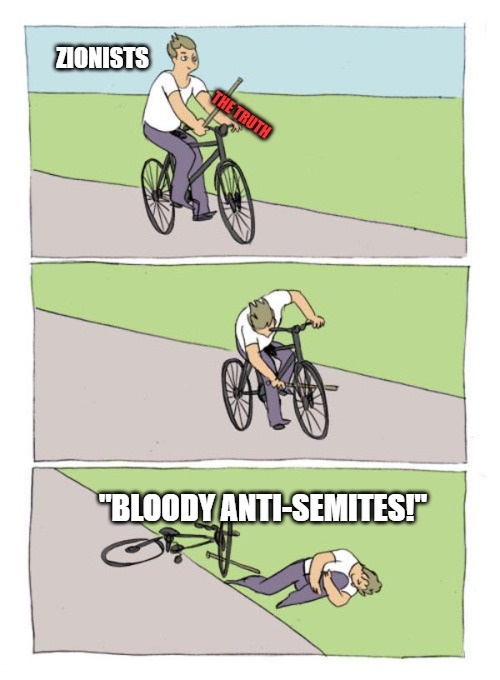 Where exactly in this comment did Mark Collett lie? Where is the error of fact? 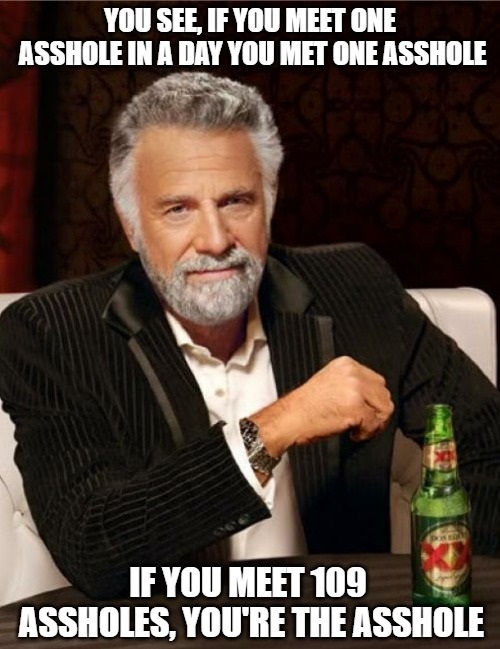 They had no counter to this point either, the neo-con Jew even implicitly agreed with him.

Unsurprisingly, none of these articles mentions the based half Indian wearing a “rivers of blood” t-shirt, who made a great case in favour of a white ethnostate. He hilariously pointed out that Indians are the most “waycist” people in the world and nobody said a word. 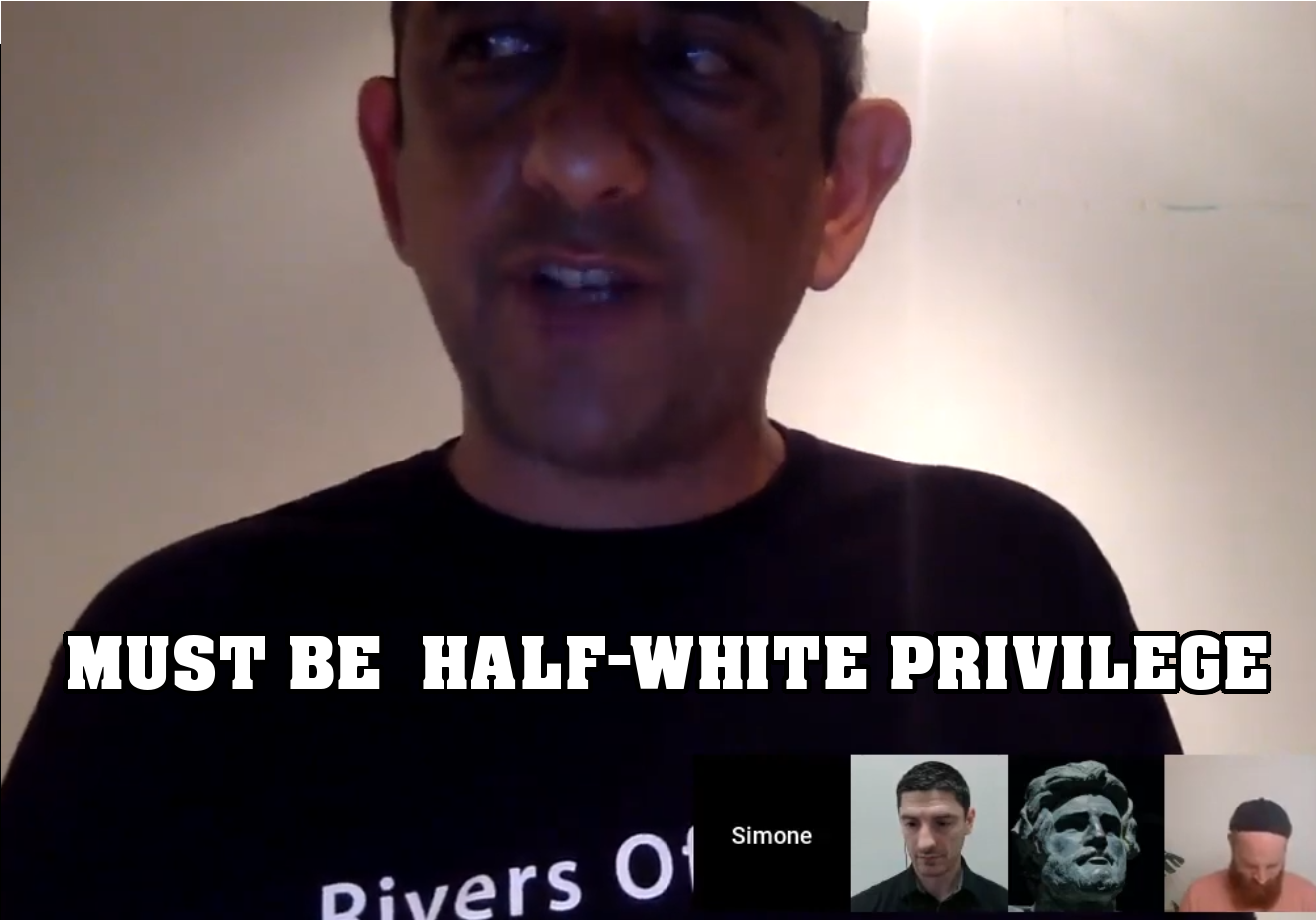 The next day, evil bad horrible ultra-mega-super-extreme-faaaarrr-riggght-Nahtzee Mark Collett sat down with his friend based half-Pakistani Shazia Hobbs, to discuss white identity. Thus proving how much he “hates” anyone who isn’t white and that white supreme-pizza’s never want civil discourse, or something like that. 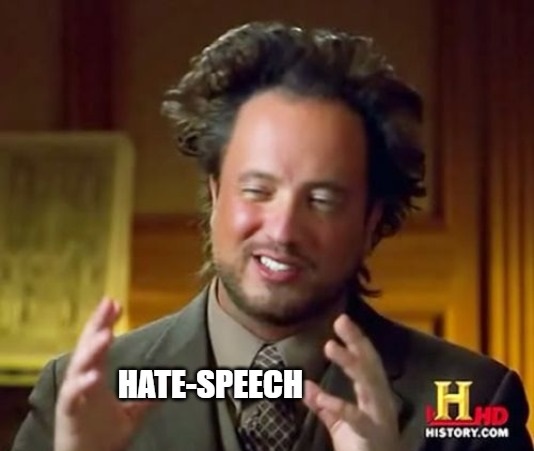 This debate is exactly what we need more of; we need discussions that take on controversial issues. Yet, whenever we get one, the establishment lose and call for censorship. It’s not just Jews, it’s the entire anti-white sphere that dominates the world right now, many of whom are traitor whites.

This is why (((YouTube))) dishonestly manipulate their algorithm to suppress independent content. Under the late 2015 early 2016 algorithm (the golden age), this debate would likely have gone nuts; it probably would have got tens-of-thousands of views if not hit trending and got hundreds-of-thousands or even millions.

It was compelling content, entertaining, informative and extremely important for peaceful discourse. Debates like this are what we need in order to prevent the coming violence; instead, the anti-white parasite class censors it and denounces the hosts simply for speaking to Collett in the first place.

They do this because Mark Collett won and he won easily, despite going up against four people essentially on his own (based half-Indian was neutral on the JQ). Worse, for the establishment, those he debated made fools of themselves. They came off looking childish and insecure; they made some decent points at times but when countering him they made personal attacks or set up a strawman, like “you shouldn’t blame all Jews.”

No serious individual in the Nationalist movement/community blames “all Jews” for the West’s problems and never has Collett made that argument. The reason for that is simple, it’s not true and no reasonable person thinks it is. 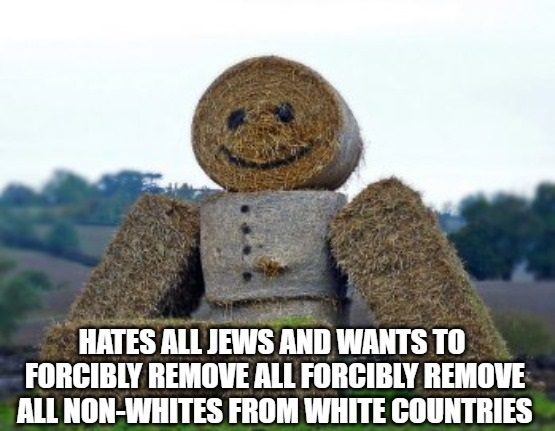 To be fair, it wasn’t an entirely hostile debate, the based Rabbi said he supported the fourteen words, he also refused to show his face (funny that). It was refreshing and made the debate more enjoyable than it otherwise would have been. He lost points when he set up the “don’t blame all Jews” strawman, but it’s something.

Unfortunately, this along with Collett’s victory is exactly the problem; the enemy does not want anyone to see the strength of our arguments. Nor does it want people to see how foolish they look when challenged with inconvenient truths.

They are desperate to hide reality from the normal folk no matter the cost to the world and this debate, along with the drama surrounding it, proves that beyond doubt. We are growing, our message is truthful and it resonates despite establishment oppression, they know this and it scares the living hell out of them.

It’s enough to put a smile on the face of every half-white ethnic nationalist. 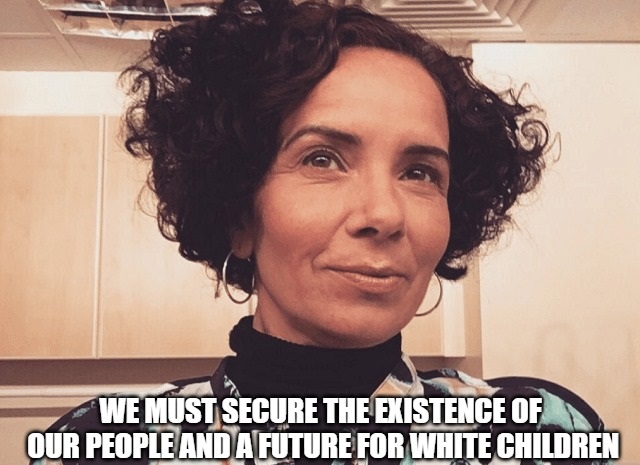 Stay positive, the truth and The One Creator are on our side, in the end we will win and no Zionist extremist can prevent that.