At 71 years of age, Dr E. Michael Jones has emerged through his widely spread interviews on youtube. Writer of several well-known books and editor of Culture Wars magazine, regular guest with Owen Benjamin and Vincent James, Jones has broken the wall between Catholic intellectuals and average Joes on the street. He’s a key figure in popularising “Logos” in the mainstream, but unlike a Jordan Peterson, Dr Jones remains uncuckable on matters of faith and taboo. In these Orwellian times, his straight-forward approach rather than weasel-words has made him broadly resonate all of a sudden.. XYZ interviewed Jones about his place in the culture war.. 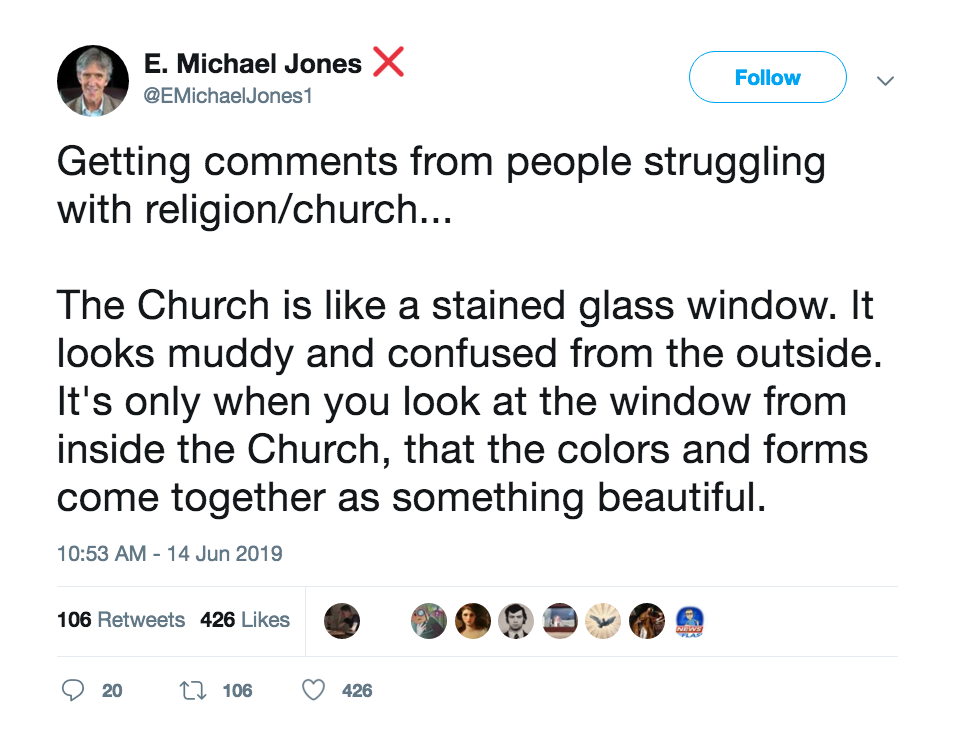 Captain Logos: In some writing and videos, you have described mainstream society as having adopted “a gay lifestyle”. What exactly do you mean by this?

Dr E. Michael Jones: Sexual liberation has been a form of control in the United States of America since 1965. At that point the main issue was contraception. Now the main proxy warrior for the oligarchs is the homosexual. I got fired from my job as a professor at a Catholic college for opposing abortion. It was the best thing that ever happened to me.

Recently you sparked a bit of a response from Richard Spencer when you tweeted “Without the Catholic Church, Europe would be like Africa”. How is that so?

Europe, if by that we mean a continent unified by a common culture, did not exist after the fall of the Roman Empire. The Catholic Church took over the administrative duties of the failed Empire and expanded its reach to the Germanic tribes, which Rome could not conquer, to finally include all of Europe. Without the unifying element of Christianity, Europe would have developed like Africa with Vikings ruling the north and Saracens ruling the south and no coherent structure to integrate those in between. 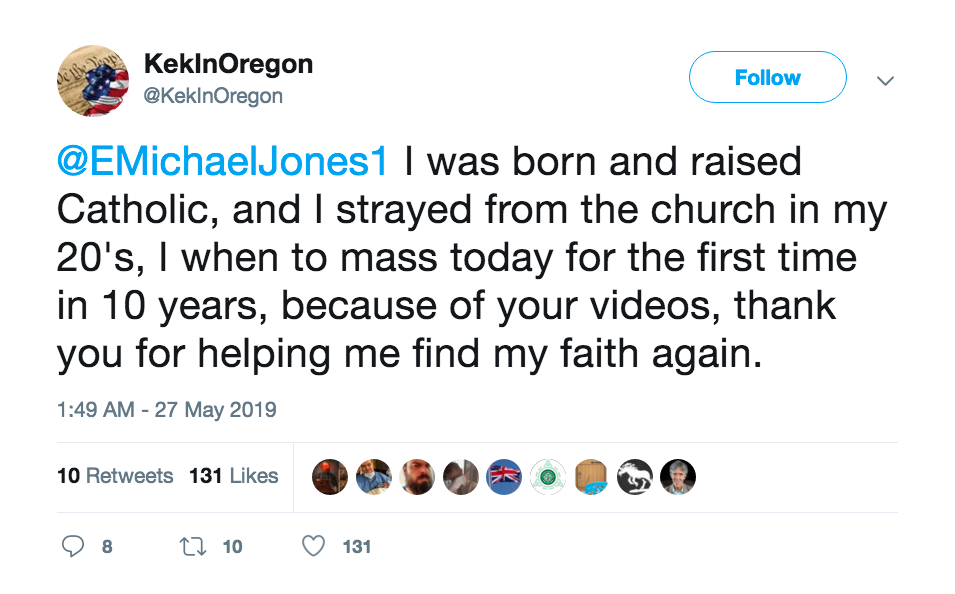 What are your thoughts on Steve Bannon?

Bannon was smart enough to advise Trump to resurrect America First. Unfortunately, once Trump got into office he got rid of Bannon and inaugurated a policy of Israel First, which has led to the current impasse in the Persian Gulf.

You have been a regular guest on Owen Benjamin’s streams and your videos have been watched millions of times.. Whats it like having such a profile boost at 71?

The Internet has allowed me access to the generation now in their twenties which has been abused mercilessly by things like pornography and student loan debt while at the same time being unable to get a decent job and form families. Books like Libido Dominandi: Sexual Liberation and Political Control have simply allowed them to understand how they have been enslaved. They gain hope from books like Libidio through understanding the mechanism that has enslaved them and how to avoid it.

Having written the book “The Jewish Revolutionary Spirit“, you are often compared to Kevin MacDonald … But there does seem to be fundamental differences between the two of you. Where do you most differ with MacDonald?

Yes, Kevin is a Catholic who converted to the racial ideology as a result of his experiences during the Jewish attempt to take over the University of Wisconsin in the ’60s and the sexual revolution. My book The Jewish Revolutionary Spirit deals with the Jews according to the traditional theological categories of the Catholic Church. When the Jews rejected Christ, they rejected Logos, and when they rejected Logos, they rejected the order of the universe, and when they rejected that they became revolutionaries, which is what they have been for the past 2,000 years. That is the thesis of The Jewish Revolutionary Spirit. Race has nothing to do with that thesis.

Your new book is about “Logos”. What do you mean by that?

At the time of Anaxagoras, the Greeks understood that “nous” or mind was the source of order in the universe. The name they gave to that order was “logos.” St. John took that understanding a step further when he claimed that “Logos is God.” Logos wasn’t just an abstract order like geometry, although it was certainly that. Logos was a person who had the power to put that order to work throughout human history. So my book discusses both the history of logos and the logos of history.