A couple of hilarious pieces in The Guardian by some chick called Arwa Mahdawi, (must be an Englander!), caught my eye this week.

Men’s fixation on young women is another sign of masculinity in crisis.

“Researchers looked at nearly 200,000 heterosexual users and found that while men’s sexual desirability peaks at age 50, women hit their prime at 18. And then it’s all downhill from there apparently. Can I just remind you that 18-year-olds are teenagers, and so this study is basically saying that straight men don’t find women attractive; they like girls.”

I wrote about this study when it came out last year but this feminist’s reaction to it is just so heartwarming that I had to share it. It’s a strange conundrum; on the one hand feminists go around loudly proclaiming to all who don’t want to listen that they don’t need or want men, yet they also get rather upset when men show preference for anyone but them. Sucks not to be wanted, right? But then, feminists are simply women who men either never wanted in the first placed or who they tired of.

Her other piece that got me chuckling is titled, Am I really ‘hurtling towards middle age’ at 35?

“Things get even more depressing when you consider a significant percentage of the population, myself included, are born with a debilitating physical condition called “being a woman”, which causes us to age obscenely quickly. While men gradually mature into silver foxes, women accelerate into irrelevance. I have facts to back this up. A few years ago, the dating service OkCupid analysed its mounds of data and found that heterosexual women on the site were largely attracted to men of a similar age to themselves. However, heterosexual men of all ages were attracted to 20-year-old women.”

She is attempting to be facile here but all she does is reveal the grim and awful reality; for every woman getting older, a schoolgirl is approaching 18. For feminists and women in general this is awful news that must be pushed back into the far reaches of their brains where hopefully it can safely be ignored. Women hate to lose their beauty because ostensibly their beauty is all that they have. Their attempts to abdicate their beauty with careers, (which just mean plain old jobs), has been disastrously ineffective for them.

But in their rush to get into the daily grind of work, women have collectively forgotten or have been willfully deceived by their older cohorts about the other and much better option open to them – motherhood. My Mother’s Day article gathered a bit of attention from the ladies here, and a couple of comments stood out. When matters of men are at stake we want to hear from men, but it is fair enough to let the chicks have their say when we are discussing matters that pertain directly to them. And heaven knows, their so-called sisters sure aren’t talking about it.

Before we look at the comments, let’s have another look at the photo that inspired that article. 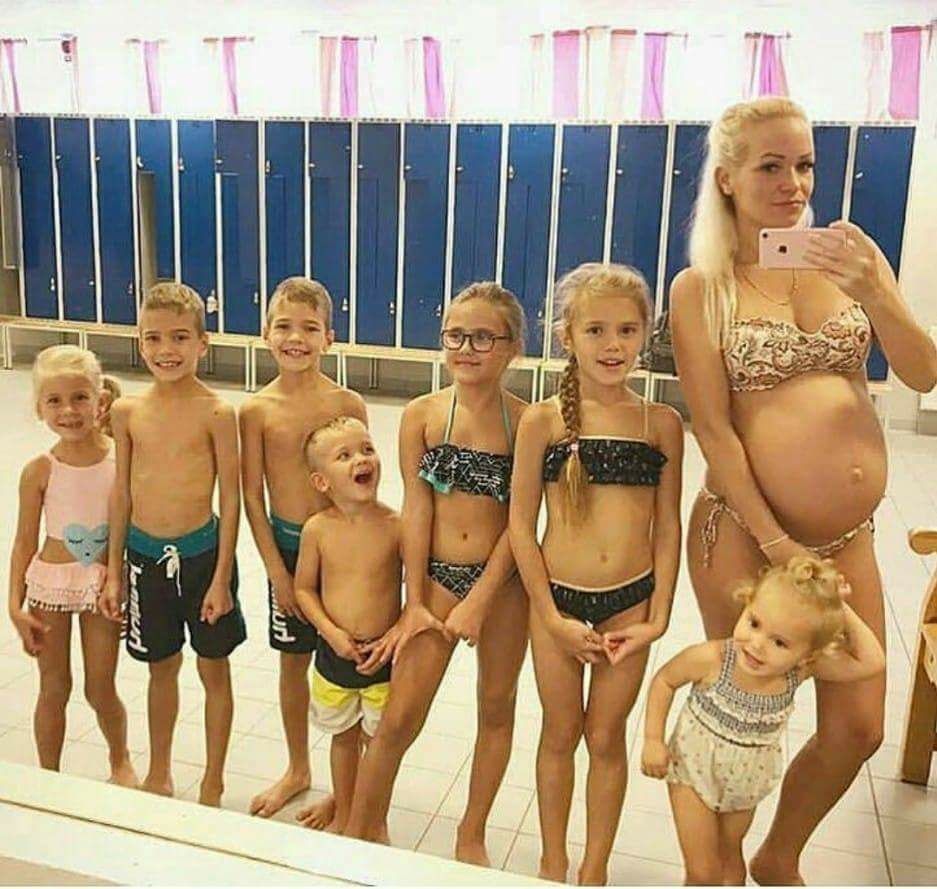 “I think the real reason that the feminists hate her is that she’s beautiful. With seven children and an eighth on the way, that mother glows with inner and outer beauty. She hasn’t used motherhood as an excuse to “let herself go”, and her children look healthy and happy.”

This is a clue to how women can prolong their beauty.

“Good point. And not only beautiful, but also strong in a fully feminine way. It’s really a great picture of someone who invested her own youth and beauty well, and is now surrounded by youth and beauty. No one can hold onto youth or beauty, it’s going to be transformed – maybe into something full and beautiful in a different way, or maybe something dry and empty.”

And here we have the confirmation. Women cannot hold onto their beauty for its own selfish sake. But they can prolong it when they use their beauty in a positive and enriching manner. This is achieved by having lots of children. Her beauty is ensured and lives on in her children, who will then do the same with their children for her. Imagine these children’s grandmothers and how happy and blessed those two older women must feel. This is the real and natural role of women.

There was another comment as well which I must include here:

“My husband and I only have 4 – we’d better get on the ball before my pregnancies start technically (and rudely lol) being classified as “geriatric” (which happens at age 35)! I remember being in a birthing class with a woman who had had a child at 18 (out of wedlock) and was pregnant again at age 28 or 29, and how pregnancy and delivery were crazy harder for her than they were when she was so much younger. I wish those facts were more widely known and taken into account as women plan their lives. Probably most people just react to the thing in front of them, and the thing in front of men and women during school is “career.”

How about that? 35 is considered to be a geriatric birth by the medical profession, while it turns out that 18 is the very best age for women to give birth. It all ties together. Yes, you are over the hill at 35 because your primary purpose is more or less done with at that point. And yes, men do prefer 18 year old women because they intuitively understand that this is what nature intended. Men are more in tune with their natural selves than modern women are and by a very long shot. Feminism is inherently toxic, which is why they project this accusation onto men. Feminism and careerism robs women of their greatest God given potential, and it is literally a crime against nature.

So ladies, go forth and multiply. And while you’re at it, stick a print out of this photo up in a nice frame. For this woman is a real hero for women everywhere and she should be their inspiration, not some careerist battleaxe who is determined that younger women make the same mistake as her. Don’t fall for it.