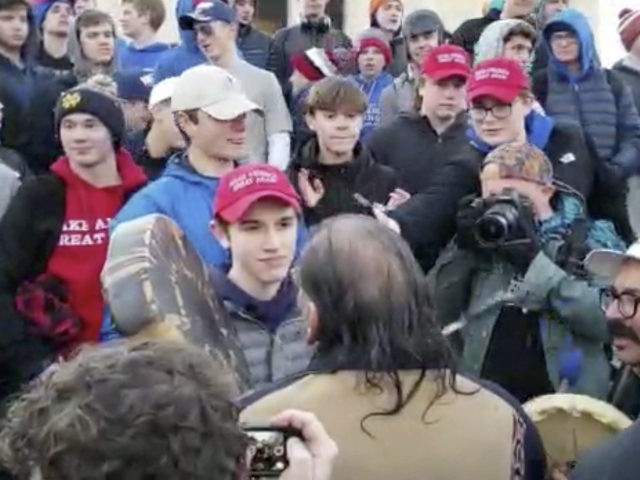 So time to pile on. Rouse up the hordes, saddle up and railroad these little miscreants out of town. Kids mind you. The pile on was by supposed adults. Remember when we had a sober and mature society? Remember when adults were supposed to act like adults and kids like kids, and each group were held to their own standards? Now adults act like kids while attempting to tear apart kids who acted more like adults than those clowns would ever know.

The social media attacks were bad enough but it was the enthusiastic and almost gleeful pile-on by the mainstream media that was beyond belief. They fell over themselves in the mad rush to excommunicate these young men, to crush their lives before they had even really begun. Three days after the entire beat-up was comprehensively debunked Leftist media outlets such as the ABC in Australia are still running the disproved fantasy that these kids mocked and attacked their own tormentors.

Everyone was so quick to react and condemn for the simple reason that they did not want to be left out. When a society has abandoned its real morals then people must scrape around in the gutter and make some morals up. The same people who were supposedly so outraged by these kids are also perfectly willing to celebrate and lionize mentally ill transsexual freaks, amongst many other moral debasements of our time. On the one hand they rush to get in line to publicly celebrate degeneracy while simultaneously condemning those who are actually attempting to hold to real moral virtues.

These social media delinquents are so cut off from the society in which they live that the only positive human interactions they are able to feel are when someone retweets one of their idiotic tweets or gives them a like. That’s the sum of their positive community involvement, the echo chamber that they cling to. They need to make others feel bad so that they can feel good. Well that sounds like Hell to me.

These teenage boys have been doxxed. They’ve received death threats, threats of expulsion, threats to deny them entry to colleges in the future, comprehensive promises from people with positions of power to lock them out of their adult lives. And let’s not forget the really tasteful moments, probably best summed up by the suggestion complete with helpful image to feed them all into a wood chipper.

These are not the actions of a healthy society, nor a society in which anyone with a modicum of dignity could feel pride. Members of the Leftist media are now beginning to realise that maybe their own actions were somewhat out of line.

Hey guys. Seeing all the additional videos now, and I 100% regret reacting too quickly to the Covington story. I wish I’d had the fuller picture before weighing in, and I’m truly sorry.

S.E. Cupp works for CNN. Cupp is sorry for being wrong, as in wrong about the facts. One presumes that if the facts were otherwise then Cupp would still have felt justified in her own attacks on teenage boys. The media once merely reported news for the public, but now they are our moral arbiters, deciding what is right or wrong and passing immediate judgement and punishment.

That the schoolboys come from a Christian school goes to the heart of the cultural malaise which we are witnessing. A society that still held to its Christian roots would never permit itself to behave in such a way as this. But Christianity is the real enemy for them and it is becoming one of the main pivot points in this modern cultural battleground. Anglo-Saxon nations are in the process of fracturing along political, religious, and racial lines, and all at the same time.

But it was those on the Right who are the real betrayers in this instance. Those cuckservatives who immediately went all in on the narrative without for a second considering not only not to do a little digging to ascertain some basic facts, but not even considering to defend their own. These boys are supposed to be their boys but they didn’t hesitate to throw them under a bus for their own personal public advantage. Their hypocrisy and betrayal is beyond forgiveness or understanding. Scott Adams was very quick to reverse his course from calling the boys arseholes but it doesn’t matter; as far as Adam’s reputation is concerned it can’t be fixed and it can’t be undone.

The fact that he called the boys arseholes in the first place, facts or no facts, is what is relevant here. Whether you want to admit it or not we are in a racial battleground and as such in moments like these you protect and defend your own side. That’s what every other race that have comprehensively invaded our respective nations are doing. They’ve been doing it all along. We’re the only ones who fell for the multiculturalism bullshit. The cucks are not just betrayers of their side of the political divide; they are betrayers of their own race. They make Judas look like a bumbling amateur.

Now they’re coming up with all of the usual excuses. Stuff like ‘they were fooled’ or ‘they didn’t have all the facts’ or ‘they misunderstood the situation’. They can go fuck themselves. They wanted to believe it was real. They licked their lips at the chance to do some real moral preening and attempt to ingratiate themselves even more with their pretend leftist buddies while preaching down to us that the actions of these kids were “not what we are” or some other cliched shit like that that they roll out with such regularity that it makes you wonder what it’s like to stumble through life with the same record stuck and replaying over and over in your head.

The very worst enemies we have are the ones who pretend to be on our side while they actively undermine us and sow confusion wherever possible. Some of them might now be grudgingly walking back their words, or at the very least attempting to delete their unfortunate social media faux pas. But make no mistake, they are deeply sorry that these kids did not in fact do what they were supposed to have done. The false story initially put forward by the media went so far and so fast because they all wanted it to be true so very badly. And that is because they hate team male, and they hate team Christian, and they hate hate hate team white.

But when you put all three of those together in one package and up against the special people then all bets are off. The cucks thought that this was a super safe lock and the cowardly fucks jumped on it. But comprehensive lists are now being drawn up of who said what because the internet is forever. And one thing for certain is that the cucks are not on our team. Which is going to get rather uncomfortable for them when things really get serious.