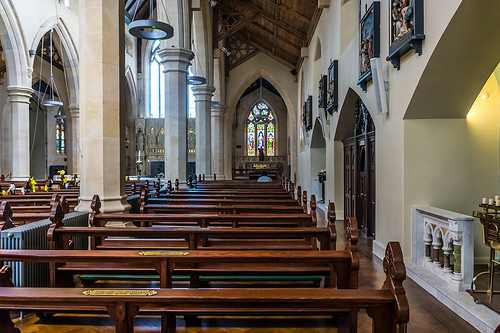 The priesthood is one of the three sacred holy orders of the Catholic Church. On average they study for eight years to be eligible to receive the Sacrament of Holy Orders. Study does not just include scholastic pursuits but also human, social, spiritual and pastoral formation.

“The Catholic Church teaches that when a man participates in priesthood, he participates in the priesthood of Christ Himself. All men who, through the Sacrament of Holy Orders, have become priests participate in Christ’s priesthood; they act in persona Christi Capitis, in the person of Christ, the Head of His Body, the Church.”

This is as it should be because a priest must administer to his parish. A part of his vocation is to help guide lost souls to salvation, so no matter what the person has done, or seen, or experienced, the priest has the knowledge and skills and wisdom to be able to help them.

Unless of course the sinner is a homosexual.

Jack from Sigmaframe responded to my criticism of his article with the following comment:

“Adam, as you pointed out, the approach of solving conflicts by establishing social boundaries could be applied to people with many other types of problems. Ex cons are better suited to witness to criminals. Recovered alcoholics are better able to deal with drunkards. Basically, I am arguing for segregation as a workable solution, as opposed to the integration now being expected of most people, including Christians. Yes, it’s controversial and anti PC to say such things, but establishing segregation is still a wise approach.

BTW, labeling gays “special people” is adopting their own viewpoint, and using this label, even mockingly, still avoids the problem.”

To be fair to Jack he is attempting to find a workable solution to the current problem of homosexuals in the church parishes. But like all moderates, his attempt to find common ground with the enemy is entirely self-defeating. Not only that, it is incredibly destructive.

Jack’s approach would completely disempower the vocation of the priesthood. By declaring that they are unable or even unworthy of administering to gays, this opens the door to all sorts of other special interest groups to seek similar special treatment and to be administered “by their own”. Far from being anti-PC to suggest an idea such as this, it is entirely PC as it greatly helps to push forward the left’s agenda.

I could not think of a more devastating tactic to undermine the priesthood and the Catholic Church itself than this. Even allowing women as priests would not be as destructive. This approach would cause the priesthood to completely unravel like a ball of string until there was nothing left.

The approach to seek common ground with the left, to form some sort of understanding so that we can all go along to get along, is the same failed approach that conservatives have been making for the past 50 years. The act of seeking common ground first gives credibility to our enemies’ tactics; but ultimately it allows them to infiltrate and subvert and destroy our institutions from within.

Homosexuals who are attempting to infiltrate the Church do not arrive at the front door with swords drawn and teeth bared. They come with sorrowful expressions of pain and hurt as they plead with us to just accommodate them so all will be well in their world. Simple Christians struggle with this as they want to be seen as charitable but it is not charitable to let unrepentant sinners in your front door; it is suicidal.

To be a strong Christian is to stand firm before our enemies. Standing firm is also the core of the new nationalist right. We do not care what you think of us. We will not seek common ground because we have nothing in common with our enemies. There will be no accommodation. There will be no attempt at understanding or coexistence. We have seen what such an attitude has wrought and where it has brought us. We have learned the lessons of 50 years of losing and we will not repeat the same mistakes.

If Christians and those on the right want clarity in these confusing times then that is all you need right there. Draw your battle lines and take pride in fighting for what you supposedly believe in.