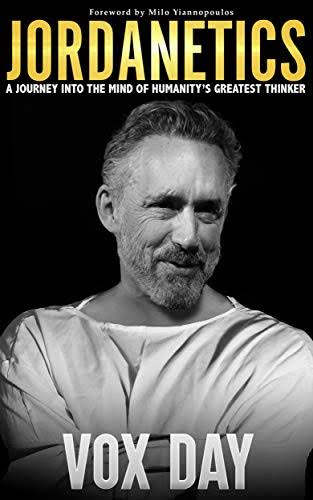 After reading Vox Day’s new book, Jordanetics: A Journey Into the Mind of Humanity’s Greatest Thinker, it is now clear that Peterson’s bestselling 12 Rules for Life is a complete projection on his part of his own very real and personal fears and weaknesses, and the temptations from which he constantly attempts to shield his conscious mind. If my previous opinion of Peterson was scathing, it has now entered the realm of sheer amazement that the man is able to tie his shoelaces in the morning, let alone function in the real world.

Perhaps the reason for this is that Peterson does not inhabit the real world. He is a professor of a discredited pseudoscience itself inhabiting the discredited world of elite universities. Added to this is his new environment of the insular and globalist hierarchy that is the mainstream media. Peterson is a star ascendant but like any man on the rise he has to pay his dues and prove himself useful to those that hold the real power.

And Peterson’s great usefulness is his ability to deceive. He is an exceptional deceiver and the basis for his aptitude is grounded in the lies that he tells himself and which he subsequently believes. But such a man must obviously struggle with his many personal problems and neuroses which is why he wrote 12 Rules for Life.

“When you put the multiple instances of Peterson’s own struggle with lifelong passivity together with his condemnation of passivity it becomes clear: most of the 12 Rules that he recommends to the reader are actually rules conceived to correct his own personal persistent weaknesses.”

Day, Vox. Jordanetics: A Journey Into the Mind of Humanity’s Greatest Thinker.

Vox Day quotes Peterson regularly throughout the book, and nothing damns a charlatan so much as the act of exposing his lies to the direct sunlight of truth. What struck me every time I read a passage attributed to Peterson was the complete absence of clarity in his written word. In contrast to the plain language that Day uses, Peterson’s sentences are convoluted labyrinths of madness. But his skill lies in spreading just enough recognizable symbolism throughout his screed that an intelligent reader will both identify with the text while simultaneously refusing to admit that he has not actually understood it.

In other words, Peterson preys on people’s inherent narcissism and their tendency to project. This is why he has been able to suck in so many otherwise clear thinking people; they assume that finally they have found someone who thinks the same way they do. For example:

“The Taoist juxtaposition of yin and yang, for example, doesn’t simply portray chaos and order as the fundamental elements of Being—it also tells you how to act. The Way, the Taoist path of life, is represented by (or exists on) the border between the twin serpents. The Way is the path of proper Being…. It’s the same Way as that referred to by Christ in John 14:6: I am the way, and the truth and the life. The same idea is expressed in Matthew 7:14: Because straight is the gate, and narrow is the way, which leadeth unto life, and few there be that find it.”

This is pure gobbledygook but it is sprinkled with just enough key words that otherwise intelligent people will come to the conclusion that he gets them. But while on the surface he is pitching the already sinful idea that all religions are the same because they all stem from the same creator, what he is really doing is setting himself up as the new Christ to lead his followers out of the wilderness.

Peterson’s religion is the Middle Way which purports to be a balance between order and chaos. As Day notes:

“Monetary theory notwithstanding, Peterson’s “order” is basically, on the surface, good. Chaos is basically, on the surface, bad. But, Peterson continues, “Order is sometimes tyranny and stultification, as well, when the demand for certainty and uniformity becomes too one-sided.” This is virtually identical to the nonsensical ethos to which the Force in Star Wars has devolved, where the Dark Side is Chaos, the Light Side is Order, and the way to goodness is not through devotion to the Light, but by keeping them in balance.

“In essence, what Peterson done is recreate the tedious concept of the Balance that infests so much mediocre fantasy literature today, wherein too much good is bad and too much bad is bad. This is Jedi philosophy, and not the quasi-religious Force of the first Star Wars trilogy. We’re well into the philosophical equivalent of midichlorians here.

Once again, for generations of men raised on Star Wars the selection of these terms is not accidental. Dark Side – Light Side, Order – Chaos. Just about the only trope that Peterson skipped was the pathetic fable of being the undiscovered chosen one, a la The Wheel of Time. But then there was no need to explicitly state this last trope as his entire body of work is a homage to the cult of the Secret King.

Peterson’s entire goal is to subvert those men who are on the cusp of acting on their questioning of the prevailing prog orthodoxy by rejecting globalism for nationalism. He does this by sucking them in with seemingly helpful platitudes to clean their room and take their pills but which themselves actually mask his true intentions. He desires a world-wide collective of mediocre automatons who will keep their mouths closed and will not act. In other words, they won’t get in the way. Far from building better men, his aim is to keep men in the nightmare of the gamma by ostensibly shielding them from the hell of the physical world with rules that perversely condemn them to circle a drain while under the delusion that they’re moving forward.

Peterson is a coward and like all cowards he can only better himself by attempting to bring everyone else down to his own level. He inhabits a world of lies and exploitation and he encourages his followers to get into a metaphorical bed with him while promising to reveal to them his secrets of power and success. Peterson is the self anointed special one and he makes the following demands of his acolytes: are you worthy enough to walk in my footsteps, and how high can you climb on my imaginary dominance hierarchy?

It was beyond my powers to penetrate the layers of concealment that Peterson employs to mask his true nature, but Vox Day is the man for the task. His book brilliantly exposes the evil intentions of this false prophet and while doing so reveals the utter worthlessness of the subject himself. How anyone could possibly take Peterson seriously after reading this book let alone follow him is beyond me.

This book is not just valuable for exposing Peterson’s lies. It is a bible for remaining on guard for all purveyors of falsehoods who walk among us. Peterson may well fade into obscurity or be completely discredited but another false prophet will be manufactured in his wake. Thus in essence the cult of Jordan Peterson is a wonderful opportunity for those of you who are susceptible to pretty lies to be able to armor yourself against them when you are exposed again.

You owe it to yourself to read this book and admit your own weaknesses and failings in this regard. Only then will you become stronger. Only then will you inoculate yourself against future temptations. And if you are able to do this then Jordan Peterson will have utterly failed in his objective.