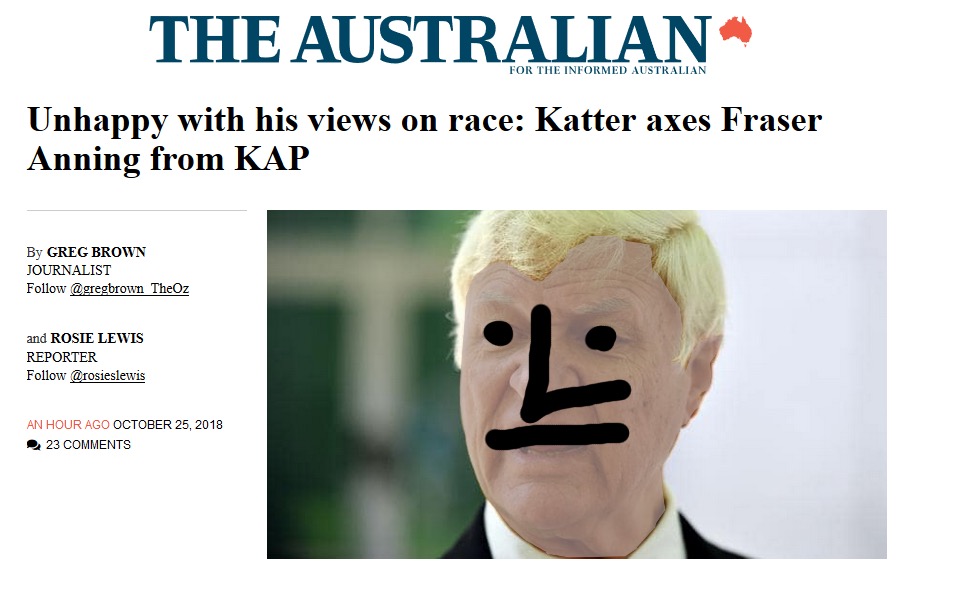 Bob Katter has succumbed to Leftist pressure and dumped Senator Fraser Anning from his political party in one of the most cowardly political acts in recent memory.

“But the party cannot and will not have any representative from our executive, members of parliament, senators or candidates dividing Australia along racial ‘Europeans’ and ‘non-Europeans’ divides.”

You see, Australian’s aren’t allowed to notice race, unless of course we are noticing Aborigines, Asians, Middle-Easterners or Jews, in which case we better notice race and make concessions based on race because if we don’t we are racist.

We are expected to lie down and allow our elites to pump our nations full of non-Europeans with their own cultures without a peep of complaint, because that would be “racist” and nobody wants to be “racist!”

Ethnic nationalism bad! Unless of course you are Japanese, Korean, Indian, Israeli and a host of other non-European ethno-states, in which case it’s totally fine.

Don’t like it? “Shut up Whitey! Get back to generating tax revenue; we need the money to continue buying votes off people who don’t care at all whether you exist or not. Plus, we like the gravy train and don’t want you dumb White trash to wake up to what we are doing to your civilisation.”

Nor are Australians allowed to have a say on who comes here, that would also be racist and, as we know, being racist is bad, but only if you’re White.

“We are the anti-racist party and we suddenly find there’s someone sort of… he’s 99 per cent gold, pure gold this bloke Anning, but the other one per cent …”

That other “one percent” is the part that wants to see his nation remain his nation and not a conquered vassal state or divided Balkanised mosaic.

What do you mean White people want to exist and have our own cultures, nations and territories where we live by our own norms and laws? Stop saying that you White devil! That’s racist!

The Australian couldn’t help itself:

“He also addressed a rally organised by a neo-Nazi group that billed itself as part of a libertarian conference attended by four Coalition MPs, as revealed in The Australian, and was attacked after delivering his maiden speech and calling for a “final solution” to immigration policy.”

It’s always the National Socialists, never forget that. If you dare to call for the preservation of White European culture, you must be Hitler.

Katter did say this:

“Clearly Fraser wants the freedom to pursue his crusade. And we think it is best for he and the party to give him this freedom.”

Anning must not back down, he needs to double down and call out Katter’s anti-White racism and cuckoldry for what it is; cowardice.

Next year’s election is going to be great fun.