Jakarta’s former mayor, a chinese-Christian by the name of Ahok, was sentenced to two years prison for blasphemy in 2017.

Specifically, Ahok had referred to the following verse in the Koran:

O you who have believed, do not take the Jews and the Christians as allies. They are [in fact] allies of one another. And whoever is an ally to them among you – then indeed, he is [one] of them. Indeed, Allah guides not the wrongdoing people.

Ahok was found guilty of “blasphemy” for saying that some clerics had used the verse to mislead voters by telling them that Muslims were not allowed to vote for a Christian. Ahok had tried to defend himself by saying that his position was that the cleric’s interpretation was wrong, not that the verse itself was wrong, but his pleas fell on deaf ears.

Personally, reading that verse, I am not sure how to get any interpretation other than what those particular clerics proclaim but anyway, this incident was particularly shocking because in Australia we are constantly told that Indonesia is proof that a liberal majority-muslim democracy exists, and is thriving, and that we Westerners need to stop being so xenophobic, etc.

So imagine my shock at the latest ABC update: 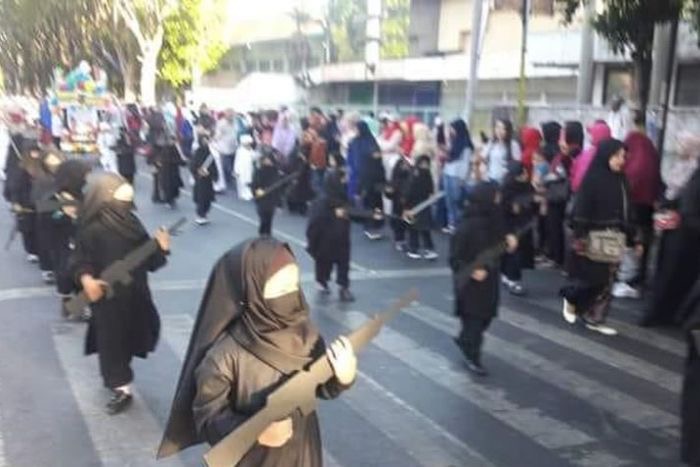 “But over the weekend, footage of the children walking down a street during the celebrations wearing niqabs and carrying what appeared to be cardboard cut-outs of AK47 rifles went viral across the country.

In a local press conference on Saturday, the head of the school Yuliana Tungga Dewi apologised for the incident, according to a report from CNN Indonesia.

“We didn’t mean any harm, nor did we have the intention to instil any sense of aggression in the children,” she said.

Ms Dewi said the children’s performance was not intended to show support for any radical religious groups, and was simply a show of faith.

Speaking to the local Indonesian media outlet Detik, Indonesia’s Minister for Education and Culture Muhajir Effendy said he did not see anything wrong with the kindergarten’s actions.

He said it was clear the school did not intend to radicalise its students.

“It’s simply a coincidence, and I can’t imagine that it could be the implication,” he said.

On Sunday, he announced his department would allocate 25 million Rupiah ($AU2,346) in additional funding to the school, which he said was necessary for operational costs and to help disadvantaged families enrol their children.”

Extra funding? Doesn’t seem like the government disapproves too greatly of the display.

“Analysts say there has been a shift away from religious pluralism in Indonesia in the past couple years, particularly following the imprisonment of Jakarta’s former minority Chinese-Christian governor Ahok, who was found guilty of blasphemy last year.”

It’s amazing that the ABC did the whole article without mentioning what cultural, religious or political changes that have occurred to cause this shift away from pluralism… 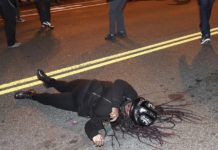