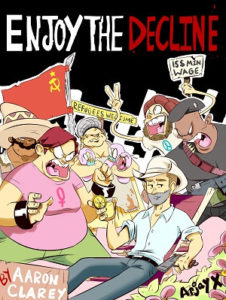 This book review has been getting some attention today. With a lot of new readers coming to The XYZ, now is a good time for an encore. Originally published February 5, 2018.

You can purchase Enjoy the Decline, by Aaron Clarey, by clicking on the link on the right hand side of The XYZ page.  The XYZ receives a royalty for each purchase.

I read Aaron Clarey’s book Enjoy the Decline a month ago. Adam Piggott kindly recommended The XYZ to Aaron as a place to advertise his book, and we plan to advertise Adam’s own book Pushing Rubber Downhill on The XYZ, and a novel called Lost Causes by R.H. Nichols, in the coming month.

So, all I had to do a month ago was read three books, knock up reviews, and continue the monetisation of The XYZ. Simple.

But there was something in Aaron’s book that caused me to reexamine the reasons why I was involved in founding The XYZ, and I couldn’t let it go until I had articulated it. To understand these reasons, we need to go back another three years, to when I read the book which motivated me to start up The XYZ; Ayn Rand’s Atlas Shrugged.

Reading Atlas Shrugged was for me the first time I had been able to tie a whole series of ideas into an overarching framework, but the pattern this revealed, and the end point it identified, made me uncomfortable: The pattern is that what was once in the West, and particularly in America, a free market system which promotes individual liberty and rewards hard work has been hijacked by people who live parasitically off the hard work of others, and the end point is that our current political and economic system is thus not sustainable, and will collapse. The proposed solution made me very uncomfortable: Hasten the decline of the system by removing yourself from it, so that you may live to see the birth of a new system based again on the free market and liberty.

Aaron Clarey identifies this same pattern, end point, and solution in Enjoy the Decline. Ayn Rand provided an in depth analysis of the economic patterns and the motivations in people’s hearts to explain why our system is unsustainable, plus the moral justification for removing oneself from that system. Aaron Clarey does the same, in considerably less words and updated to the 21st century, and he provides the starting points for how to make the most of it on the way down, and how to survive and thrive once it is all gone.

He wrote Enjoy the Decline shortly after America had elected Barack Obama to a second term. As he puts it, Americans “chose socialism”, and the path to ruin was set. He spends the preface and the first chapter of the book detailing the importance of accepting this reality, although dark, of changing one’s mindset from one that has “rational expectations” to one that accepts reality as it is, and making decisions accordingly.

In the second chapter he makes the economic case why the American system is not sustainable – spiralling national debt in the tens of trillions of dollars, and unfunded liabilities in the hundreds. It is important to note here that Aaron does not believe that the election of Donald Trump can change this trajectory. I asked him about it, and his response was as follows:

“No, Donald Trump was a fluke where the Democrats ran arguably the worst candidate they could, and the Republicans for once grew a pair and ran a candidate that was not a cookie cutter country club Republican.  Our economy has done somewhat better under Trump, but the long term demographics show whites declining (who typically vote conservative) and non-whites increasing (who typically vote socialist).  Additionally, whites themselves are becoming more liberal/leftist as painfully evidenced by the millennials’ obsession with socialism and leftist politicians.  We will slowly become more like France and Europe, and inevitably Brazil.”

Thus having made the economic case for decline, and having outlined the required mindset to approach this, Clarey sets about explaining how you can enjoy it. Subsequent chapters focus on minimising your lifestyle in terms of earnings and expenses in order to minimise how much the socialist system can steal from you; maximising what you can get out of the system in order to accelerate its demise; the importance of friends and family and getting the most out of your relationships; and taking practical steps and learning practical skills you will need in the event of an economic collapse or even a SHTF scenario – essentially prepping.

When discussing the latter, Clarey explores the option of leaving the United States. He suggests a number of possibilities including Europe, Asia, several of the more developed and freer countries in South America, and Australia. It was here that I asked Clarey if he still held to this view, as from the moment I opened his book, I recognised the same economic, political, cultural and demographic trends in Australia. Clarey has indeed changed his mind:

“I was originally pro-Australia but I fear with your smaller population it won’t take that long for immigrants who vote for socialism to effectively implement a socialist economy there.  Worse, I had no clue how delusional Australians were over environmentalism and feminism.  Again, somewhat similar to the US, native Australians (non-aboriginal) are swallowing socialism whole to the point I see native Australians bowing down at the alter of “feminism,” “environmentalism,” SJWism, all of which is simply socialism.  I would have to update my research on Australia and look at your demographics, but when I see women complaining that they’re not making as much as men in the superannuation (when they didn’t work as hard or put as much into their retirement accounts) or full grown adult female politicians acting like 23 year old college children and accusing others of “mansplanning” I’m thinking “stick a fork in them, they’re done.”

So, Australia is in the same boat as the US, ie, headed for collapse.

The last chapter is excellent, as it explains that having minimised what the socialist system can steal from you, maximising your ability to hasten its demise by taking as much from it as you can, focusing on family and fulfilling relationships, spare time to explore the world and engage your interests, generally living your life to the fullest while being prepared for the worst, you will get the ultimate revenge on what Ayn Rand would refer to as the looters: The looters demand your very lifeblood in order to keep them alive, but you have refused to give it for them. Thus, the socialist system which keeps the looters alive will collapse. You know it, they know it, and there is nothing any of you can do to stop this, but you are the one who is going to come out on top.

This conclusion is correct, and every building block Clarey has set in place to lead to this point has followed in one logical step after another. But it is here that I respectfully disagree with an underlying premise of Clarey’s and indeed of Rand’s.

On page 9, Clarey states the following:

“We must also realize that, for better or worse, the United States is a democracy and this is what the people wanted. Opposing it would not only be against the principles of the United States, but it would also be the definition of tyranny. This should provide you some solace, or at least assuage any guilt you have, in that you were not responsible for the demise of this country. You did what you could. You did your best. You voted, you were politically active, you tried to convince people to vote for freedom, you lived up to your civic responsibility. That’s all anybody can do. The rest of it is outside of your control because this is a democracy regardless of how ignorant the electorate.”

If you allow the democratic system of your country to destroy your country, I argue that you are in fact responsible for the demise of your country. I don’t know if anyone has written a sequel to Atlas Shrugged, but here is the likely blurb:

“250 years after the establishment of a new United States, based on a Constitution founded on the thinking of John Galt and his associates, a new band of brave individualists must work together to either save their country from collapse at the hand of the looters, or work to hasten its collapse so they can have another crack at civilisation.”

Clarey reaches the same conclusion as Rand because he argues that we must respect the democratic process. It is a principled decision and I respect him for it, but I do not agree with it.

The United States, like Australia, is a country founded by Europeans for Europeans. The liberty and democracy which Europeans have experienced in America and Australia is a product of our biology. European culture which has allowed our freedom to flourish is a product of our biology. The r/selected Europeans among us who want to live parasitically off the productive K/types have hijacked the democratic system to the point where it is destroying our countries. This pattern has plagued civilisations throughout the millennia. If we commit ourselves to abide by democracy, even when that democracy works against our own interests as a nation or as a people, we enslave ourselves to the cruel cycle of history where civilisations rise and fall. I want to get off that boat, and find a way to make our civilisation last, and take us to the stars.

If the protagonists of Atlas Shrugged had been prepared to get their hands dirty to take back their country, they would not have had to accelerate the destruction of their own country to win the fight for freedom. Socialist systems have an awful habit of killings millions along the way before they ultimately collapse. In this regard, how can respecting the democratic process which brings a socialist system into place be considered moral?

What matters more? Democracy, or your country? The NAP, or your people? This is at the heart of why many libertarians have become nationalists, and it is what took me the month of January to nut out.

The XYZ has helped a lot of people put together what it is about the degeneracy, the parasitism, the delusion that they see all around them, and to utilise terms such as Cultural Marxism to tie it all together, so they can understand how the system works and where it is headed. Enjoy the Decline is a crucial book to help us understand this system, and I strongly encourage you to buy it, read it, challenge yourself with it, and ask yourself this question:

What are you prepared to do?