Sometimes I come across a situation so bizarrely antithetical to common sense, created by human beings so clouded by delusion, that rather than find it extremely funny, I am actually overtaken by a feeling of intense sadness for all involved.

This week I’ve realised that there’s a whole other sub-genre of insanity that has erupted within the professionally-offended Left; that of the battle between the “trans” community, lesbians and radical feminists. They constitute a triumvirate of furious folk all pissing off and on each other to determine who in the pantheon of victimhood can be more offended by the others, and who can be most authentically ‘real’ in a civil war most of us would find unbelievable, were it not for the fact that it’s increasingly impacting on our everyday lives.

These groups are in a TERF war, and if like me the term is new to you, it stands for trans-exclusionary radical feminist, and serves as the new “nigger” slur from the radical gender subculture. Originally coined within the LGBTQ community to describe old school feminists such as Germaine Greer who refuse to toe the line of the “all women get periods, even the ones with testicles” brigade, it’s now morphed into a fully-fledged indicator of the war between radical feminists and the trans-community as a whole, with the groups clashing over whether “women” with penises should be given the same rights as women with vaginas.

[Hint – if you’re describing your period symptoms as being the result of a cocktail of the antiandrogen spironolactone and estradiol, I’m thinking I’m not feeling all that sorry for you.]

The TERF war can be neatly encapsulated by this case of a group of elderly feminists in the UK being assaulted by a strapping young “lass” named Tara Wolf (pictured above arriving at court with the obligatory posse of masked Soyviet apparatchiks), who took exception to the fact that the feminists were exercising their free speech at Speaker’s Corner at Hyde Park. The gathering was intended to highlight their concerns with the Gender Identity Act, more progressive legislation aimed at making it easier for gender ideologues to redefine their gender as they see fit.

Naturally the elderly group were accosted by a counter-protest of trans-activists of which Wolf was a member, who had a problem with the older ladies’ free speech (isn’t this hilariously familiar).

Needless to say, Wolf had posted on Facebook ahead of the event: “I wanna f*** up some terfs. They’re no better than fash (fascists)”, although in this day an age, a trans-person playing at “bashing the fash” in a pique of virulent self-aggrandisement is hardly a shock.

As loathsome as I find this entire story, I can’t help but feel only a modicum of sympathy for the old ladies, beyond the fact that no woman in her early 60’s should be assaulted by an antisocial youth, regardless of their mental fragility, or how convinced they are that the little old ladies are actual fascists. Like Frankenstein’s monster, the trans movement which radical feminism birthed is seemingly now running rampant, intent on destroying its creators. Poetic justice perhaps?

It does not bode well for the ongoing integration into the broader community of the gender-confused, given our modern medical and social failings to address the underlying mental issues so prevalent it this community, so desperate are the leftist activists and academics to declare this all mainstream and but a perfectly acceptable wrinkle in the healthy fabric of society.

We saw how well that worked out for the wonderfully stable 7-Eleven axe attacker, Evie Amati, and her victims. Indeed, her defence team has argued that he was not of sound mind that night, ignoring the obvious fact that he/she/it was likely deeply unhappy and troubled by an inability to fathom how her sex change operation hadn’t brought her any lasting happiness – how shocking.

Evie Amati wasn’t the first, and certainly won’t be last, as long as we continue to kowtow to the politically correct notion that seems intent on shouting down real concern for a subset of extremely vulnerable people desperate to find a fix for why they feel disassociated from the sex they were born with.

For now however, I can only try and bring attention to the world in which these people exist. I really do want to find this all extremely funny, but try as I might I’m constantly gripped by empathy, not least because with the Outrage Meter permanently set to 11, life on Planet Provocative must be even tougher than it already would be in a world where the desperate desire to be “special yet normal” overwhelms their every waking moment.

I will thus leave you with this screenshot – full thread here. 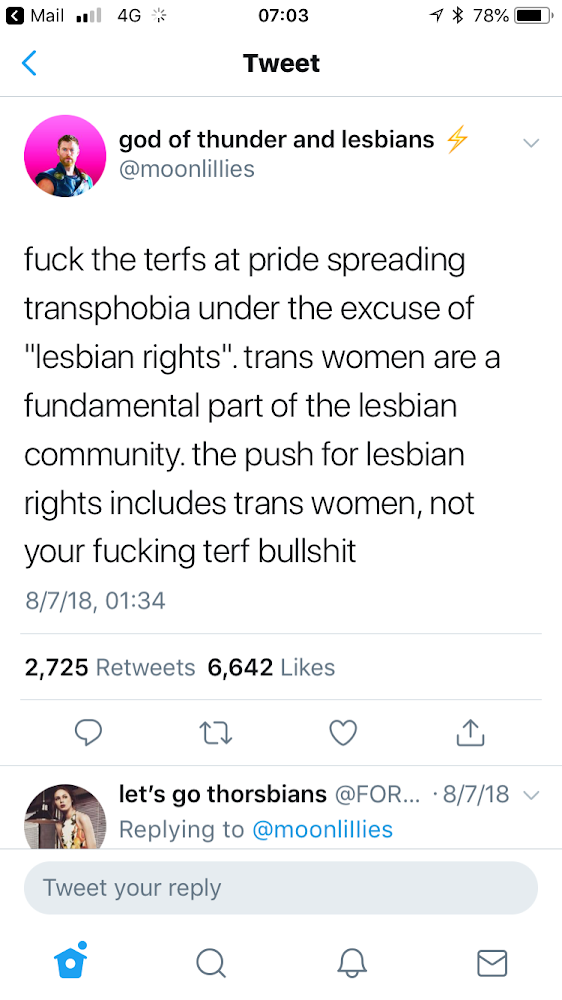 If nothing else know that this is not parody, nor is it an outlier. The Left is perpetually outraged and violently offended by anything that does not 100% support their position or ideology. While it’s ridiculous to read, it’s like an emotional cancer which is hollowing out reasonable discussion by the week, and even though it’s eating its own first, this is a TERF war I would happily support if only it meant less pointless pillocks parading their professional outrage at us.

I for one will be donating liberally to the trans-activist fund, #nerftheterfs, just as soon as I’m done with this piece!