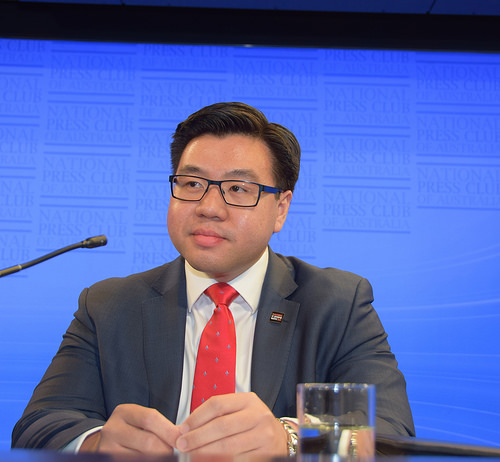 It’s been reported that the five-year reign of Race Discrimination Commissioner Thinethavone “Tim” Soutphommasane will come to an end this year (2018), and thankfully, the Liberal-National government will not reappoint him for a further term.

That Soutphommasane was ever granted this position in the first place, and given such a high platform to propagate, lecture to, lie to, and spew forth his toxic Multicultural Supremacist agenda almost epitomises what’s wrong with modern Australia.

That the Australian taxpayer actually pays a Race Discrimination Commissioner a reported $340,000 yearly salary (plus travel expenses) to gallavant around the length and width of the country, to basically preach their Multicultural Supremacist zealotry epitomises the age of politically correct, Elitist bureaucratic madness in which we live.

That a PC zealot was held up as being such an authoritative figure, eagerly quoted by journalists, welcomed to make electronic media appearances, and had many of his articles appear in the print media, is evidence of how badly we as a society have become intellectually corrupted.

That a man, who seems to genuinely believe in the Multiculturalist insanity, managed to reach such a pinnacle, displays how far we have to go to correct the rot that currently exists in Australian public and political life. That Soutphommasane also serves on the board of the National Australia Day Council is further evidence of this. It is the epitome of how Cultural Marxism has rotted to the very core of our society, and captured the main political, bureaucratic, media, and educational establishments.

That Soutphommasane, who joined the Labor Party as a fifteen-year-old in 1998, and was a partisan Labor appointment as Race Discrimination Commissioner, was allowed to continue his role under successive Liberal-National governments, also demonstrates the weak, unprincipled moral cowardice of the Coalition parties. Soutphommasane was a former staffer to former NSW Labor premier Bob Carr, and to former Labor Prime Minister Kevin Rudd.

That the Liberal-National government has now advertised for a new Race Discrimination Commissioner, instead of abolishing the office entirely, proves once again how the “conservative” parties in Australia are allowing the Cultural Marxist Left to set the political agenda. It is no wonder that the term “cuckservative” is becoming so widely used. A Race Discrimination Commissioner is yet another bureaucratic office that Australia simply doesn’t need.

But all is not lost, dear reader. Just as Communism fell in the Eastern bloc countries, so too, can Cultural Marxism fall in the West. If we resist it. And in the Culture War, the momentum is now rapidly shifting. Even Tim Soutphommasane appears to sense this.

But be in no doubt, the end of Soutphommasane’s bureaucratic reign is a good thing, and a development for Nationalists to savour.

The Human Rights Commission’s racial agenda has nothing to do with justice. It had everything to do with power, and who’s values dominate in the Culture War. With political correctness (Cultural Marxism) being in the ascendency in the last few decades in Australia, it’s been the lobbying power of ethnic powerbrokers, opportunistically championed by politicians, that have effectively helped create a type of new racial hierarchy in Australian society, with precious non-whites at the top, and whites down the bottom — weak, guilt-ridden, without a political voice, and subservient.

This is what so much of the “anti-racism” narrative is really about — maintaining this new hierarchy, and continuing the white-privilege-white-oppressor, and powerless-non-white-victim narrative. A loaded agenda with chronic racial double standards that encourages and promotes white guilt, and vehemently opposes any white advocacy. It’s an agenda that encourages emotional fragility and “victimhood”, and identity and grievance politics in non-whites; but gives no quarter to any form of white solidarity. All under the guise of “social justice” and being opposed to “racism”, of course.

Whether the progressive Left really care about the non-whites their perennial virtue-signalling would have us believe, or whether these Social Justice Warriors simply use non-white lobbyists to gain and maintain Culture War power themselves, remains an interesting philosophical question.

But this is why the ethnic powerbrokers and their progressive Left champions in Australia were so determined not to give any ground on reforming Section 18C of the Racial Discrimination Act. It wasn’t really about the trivialities of the law; it was really about who holds the whip hand in the Culture War.

Perhaps Soutphommasane knew the writing was on the wall. Perhaps he sensed that the political pendulum was starting to swing hard against the PC Leftist zealots.

In an article for the The Sydney Morning Herald (29/12/2017) entitled “The year’s creeping tide of racism”, Soutphommasane lamented that “This year, across many countries, racism has gained a new credibility and potency. Right-wing nationalism has gathered momentum. White supremacist movements (sic) have surged”.

He went on, “The problem runs deeper. Within our political discourse, there has been a creeping normalisation of discrimination and hatred” (sic).

Toward the end of Tim’s bureaucratic reign, it was becoming increasingly obvious to the ordinary, often uneducated masses that Multiculturalism wasn’t working out so well after all. Little factors like the Islamic terrorism threat, the African crime wave in Melbourne, and the radically changing racial demographics (in our big cities especially), were waking up a lot of Australians to the Multiculturalism con.

For this is the big problem with trying to mix large numbers of people from different ethnicities, cultures and religions all together in the one society. Instead of it creating strong, stable, united, coherent societies and long-lasting civilisations with high social capital, it creates perennially fragile societies, easily divided and fragmented, and prone to serious conflict developing at whatever point. It’s a high-risk strategy, with not much reward.

But was Tim to give any ground and admit his ideology may have had a few self-evident flaws? Nope. Instead, he borrowed from Leftist zealots overseas, and began ramping up a “white privilege” narrative.

Instead, soon enough, Tim was moaning about an apparent “lack of diversity” in Australian leadership, and suggested that “there were too many Anglo-Celts”. This could be addressed by “cultural targets and quotas across the business, academic and political worlds”.

This is precisely one of the problems with creating unnecessary bureaucracies. The bureaucrats feel they have to justify their jobs and salaries, so they get involved in all kinds of harebrained schemes and activism.

Perhaps even sweetest of all, Tim’s “white privilege” narrative prompted an outstanding hit-piece from News Corp journalist Frank Chung (a man of Asian ancestry like Soutphommasane). In his article, Chung slammed Soutphommasane as being the “Commissioner for Racist Discrimination”, given his obsession with skin colour and apparent distaste for anyone from an “Anglo-Celtic or European background”.

Soutphommasane has written a book entitled Don’t Go Back To Where You Came From; ironically, there’s no doubt many of us will hope that, one day, Thinethavone “Tim” Soutphommasane will go back to the lands his Asian ancestors came from. The Australian nation would be better off without him.

“The Mocker: What will Tim Soutphommasane do after the Human Rights Commission”, The Australian, 3 May 2018 (The Mocker).

This article was originally published at protectionist.net.