The XYZ’s Facebook account has been suspended for three days for a post which went against Facebook’s so-called “community guidelines”. Given that I have deleted comments and banned users on The XYZ site itself, I have no right to complain, hence I will simply focus on the facts.

When I ended The XYZ’s formal commitment to absolute free speech back in February, my aim was to discourage the flooding of The XYZ’s comments section with ironic national socialist memes on the one hand and reflexive accusations of antisemitism on the other. The high standard of debate which is currently playing out regarding whether Jordan Peterson is of the left or the right demonstrates that this was an excellent decision, as I have gotten exactly what I wanted.

The internet is owned and run by globalists. When they ban users and websites, their aim is to sanitise the web of the most effective opponents to their globalist agenda. That is why The XYZ is being silenced. This comes as no surprise, and as I have stated before, I am frankly amazed that we have been able to carry on for so long without stiffer resistance.

So, what was the offending post that gave us a three day Facebook holiday? Was it Adam Piggott’s use of the word “nigga“? Was it Matty’s Modern Life’s exposure of the Stolen Generation Myth extortion racket? Was it Lucas Rosas’ doxxing of multiple Marxists working to manipulate Australian politics? Did someone mention the bracket people again? Was it yours truly’s hijacking of multiple MSM articles in order to promote pro-white talking points? Or was it Steve B’s gratuitous use of the word “chinkini” in order to lampoon the banning of grid girls at the Melbourne Grand Prix?

It was none of the above.

It was the article #DayForFreedom Redux by Sam Vimes, one of the most considered and articulate contributors to The XYZ, that raised the ire of Facebook. Vimes analysed an article by Yasmin Alibhai-Brown which had made the claim that the right has “weaponised free speech” and advocated for the crackdown on the right’s use of free speech. As such, this makes this the most ironic thing that has happened since that episode of South Park:

When I shared this on Facebook, I provided in the following preamble which has been deemed “hatespeech”: 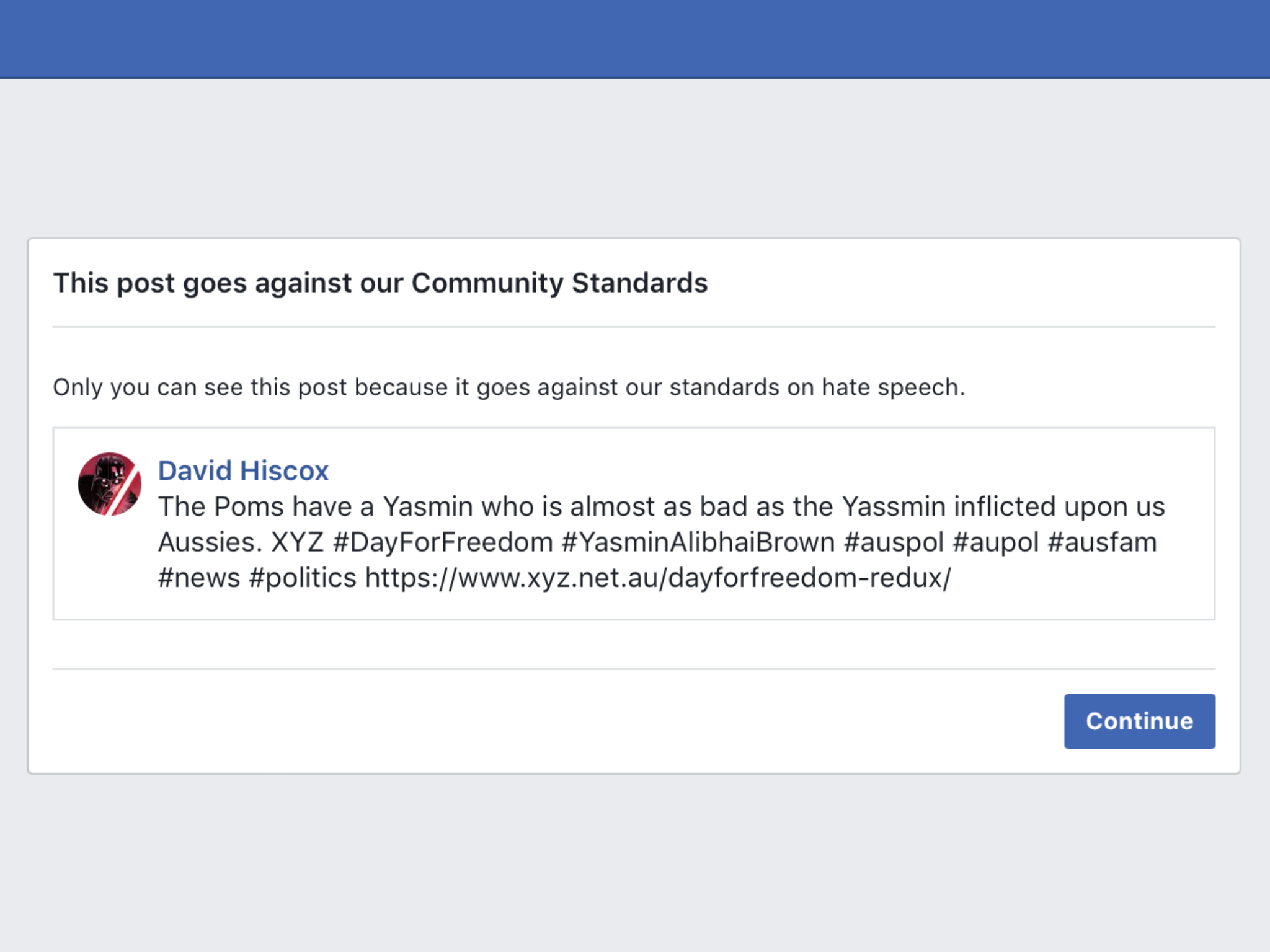 Given that this preamble is entirely factual, and given the evenhanded nature of Sam Vimes’ report, it is clear that Facebook’s decision was completely arbitrary, and simply a part of its strategy to remove dissent from its platform. Facebook has been restricting traffic to our page for quite some time, and it imposes regular bans on our most effective generals and readers.

This has transpired in accordance with my predictions. As stated, the globalists own and run the internet, and they want the internet to further their globalist cause. Anybody who just wants to be left alone, who wants small government with low taxes and regulation, who wants to raise a family free of so-called “safe schools” nonsense, who wants to control the borders, freedom of religion, and to secure the existence of our people, will become a target for removal from the internet. It doesn’t matter if your are Jordan Peterson or the Daily Stormer, if you speak out in any way against Marxism or globalism, you will be systematically harassed and suspended until you are banised to the dark corners of the internet.

It is why we are encouraging people to follow The XYZ on a diversity of social media platforms:

However, don’t expect these platforms to be safe havens. It is the definition of madness to expect a different outcome from the same set of circumstances. The globalists have demonstrated their determination to suppress dissent and that is what they will continue to do. As soon as alternatives to Facebook become popular, the globalists will move against them and shut them down. Conservatives, libertarians and nationalists will be hounded from site to site, from server to server, until we have no way of communicating our message to a wide audience or communicating with each other on the internet.

However, we will still have ways of getting our message out on how to take them down:

You can’t stop the signal.

And also, when we are all banished, then it will be helicopter time.

Remember, you are in a war.