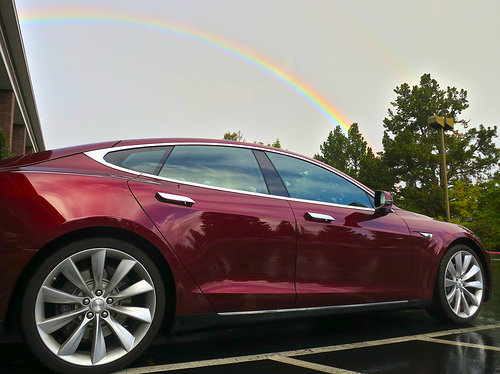 Adam Piggott’s recent article When will it be time to short Tesla? stirred me to write a counterpoint article, specifically as I take a close interest in this topic.

I will begin by saying that I invested in Tesla previously but cashed out in the middle of 2017. Having said that, I am inclined to buy Tesla, waiting for a big dip – and here is why.

The machine that builds the machine is akin to the revolution of Henry Ford’s radical production line concept. Furthermore, high-tech industry with a heavy dose of automation ought to see capital investments for productive capacity being redirected to politically stable first world countries who have an educated workforce and sufficient infrastructure to ensure continuity of supply and operations. Time will tell if I am on the mark with this assessment.

Tesla is actually well placed to turn a profit – it’s paradoxically a bad long term move – and the market has been rewarding Tesla for this.

It sounds crazy – but here are the facts:

Drawing on some of the previous points, it’s not accurate to say the vehicles are produced at a loss. Obviously, if thats the truth then they are absolutely heading for insolvency, and the more they produce, the faster. But here is a look at some facts, for the more financially literate among you.

They actually produce at a nice margin, albeit with the Model S and Model X giving those financials.

Having said that, Tesla reported a loss from operations of 1.6 billion in the FY. This is calculated as Gross profit minus Operating Expenses.

So, an operating loss of 1.6 billion is an awful number, and is what is referred to when Tesla is derided for not ever making a profit.

I will not go into Cash Flow analysis in detail here, suffice to say that Tesla has a track record of approaching the market for more funding and getting it. It actually has acquired funds from almost all the options, including issuing new Stock (which dilutes shareholders capital), bonds (which are rated close to junk – implying high risk), convertible notes (basically you can ask for the money back or convert it into stock by a fixed date at a set price… I would happily snap this up) and other money options. I believe the theme is consistent. High risk – but potentially high returns.

Well, the big print giveth and the small print taketh away. Did I mention that there is significant risk in Tesla and its growth orientated business model. Well, when is a 5 billion pay packet not a 5 billion pay packet? Ahem… when you read the details. Long story short, its not a salary of 5 billion a year…. its rather a high risk high return compensation package whereby, if the company is insolvent or does not more or less double in market capitalisation, he gets nothing. 0. or if the company grows about 11 times in market capitalization (very high return), then he gets 55 billion over 10 years – which is a 5.5 billion pay packet. Which I would say is well earned.

As quoted in this article from fortune:

“To earn any compensation going forward, Musk must grow Tesla, whose current market capitalization is about $59 billion, to $100 billion in market cap, and also increase its revenues or adjusted earnings (before interest, taxes, depreciation and amortization, a.k.a. EBITDA) by at least 70%. That would satisfy the first milestone of the 12-level compensation ladder, allowing Musk to collect stock options worth an additional $1 billion. But Musk also has the opportunity to collect a significantly bigger windfall. If Tesla’s market value reaches $650 billion (an 11-fold increase) by 2028—and if the other financial measures multiply between 15 and 21 times—Musk can keep all dozen tranches of stock options, netting him an additional $55.8 billion, according to the company. Musk’s real reward would be even greater. After all, the CEO is also Tesla’s largest shareholder, and if he hits all 12 performance milestones, the company calculates Musk would own as much as 28.3% of Tesla. With that large a stake of a $650 billion company, Musk’s net worth would surge to $184 billion in Tesla stock alone.”

I personally loathe the whole scam of green subsidies. However, I do not believe that this is materially significant for Tesla. Rather, I believe they have managed through Research, Development and Innovation to do what no set of Government mandates or lecturing from lefties could do – they have changed the paradigm for the car industry and forced a raft of car companies to invest significant capital into mass production of electric vehicles (ironically, this is one of the biggest threats – competition from those big players with deep pockets scrambling to catch up). Basically, I think this shows how industry can change markets much better than tree hugging and starving of peasants.

From the Tesla Annual Report (page 22):

Tesla is a big crazy risky bet. Musk will over-promise and under-deliver, but what he delivers will be a moon shot rather than a Mars shot. If that is failure, then I like that type of failure. Now, the behaviors of the market which determines the price of a share is sometimes illogical, swayed by rumor, fear, world events and oft times plunging on an earnings beat-and-raise. If the fundamental performance of Tesla is good and they are moving forward as planned, and the stock plunges, consider buying … and vice versa. Options are a great way to make highly leveraged returns if you want to play risky on a high risk stock. In summary, I see Tesla as a genuine innovator and wealth creator, not some green scam – and genuinely hope Musk gets his 55 billion pay day in 2028 when tesla has a stock price of ~ 500 per share.