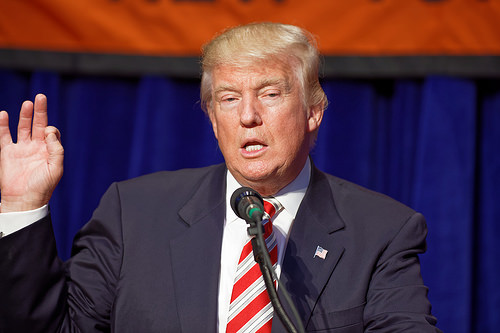 Trump’s steel tariffs are sending the world’s bow-tie brigade into total meltdown. Free trade is their Gospel and anything that challenges it is literally worse than Hitler. The globalists have been ramming free trade down our throats for the past 30 years. The outcome has been a near total destruction of manufacturing bases in countries like Australia and the US. We were told that this was good for us and that new jobs would be created in the “smart industry” or whatever it was that they were calling it. Those jobs largely failed to materialise, unless you counts hordes of public servants.

Free trade was a giant con that gave immense profits to large companies who could outsource labor costs to cheaper foreign nationals, as well as removing manufacturing bases to countries in Asia. It has helped to seriously destabilize the working class who have seen their jobs disappear and their towns slowly die.

But in the minds of economists all of this is okay because there is nothing more practical than good theory.

“It is well worth emphasising that arguments against free trade are always conspiracy theories. Evil foreigners are doing bad things to us.”

In the minds of economists who only deal in the world of the theoretical, free trade means exactly that. All the people of the world are pure and only have our best interests close to their hearts. The reality is far different. Trade is war by other means, and governments which have not been usurped by outside interests will do their best to give their nations as big an advantage as possible.

But at the same time evil foreigners are doing bad things to us. People were shitting their pants just a few months ago about Little Fat Kim and his nukes, but now he’s suddenly come to the negotiating table and wants to give them up. How the hell did that happen?

China. Trump is using economic leverage on China in order to get them to act on North Korea. China enables North Korea – without them little Fats is screwed. So Trump is going after China and the only way to make them listen is economics. In case you haven’t noticed it’s called the art of the deal. The US military is there to back up the economic leverage. China respects this play, unlike the US foreign policy of the last 30 years.

Trump’s tariffs are not just about protecting people’s jobs; they are a strategic push to force diplomatic change without resorting to the use of military force. The point is that in the minds of those that push the free trade line, free trade is linear, it isn’t even binary. The only thing that matters is free trade and anything that gets in the way of this is horrible and evil. It is an infantile way of approaching the complexities of the world in which we live.

“The only interests that all Australians have in common, and with the government, is the maintenance of law and order, and national security.”

Economics, trade and national security are intrinsically linked. Trade does not exist in a bubble and neither does economics.

Which is exactly what Trump is doing but economists such as this are completely blinkered and unable to see it. The irony in that statement is incredible to behold.

But what about the fact that tariffs and protectionism might cause items that we want to buy to be more expensive? After all, this is the great bogey monster that gets wheeled out all the time whenever there is a serious objection to free trade. First of all, if you’ve lost your job due to the knock-on effects of free trade then you won’t be in a position to buy anything at all, regardless of the price.

But at its heart, this attempt to scare people is also a big lie. There is no evidence that tariffs cause prices to rise. Prices are set to maximise profit. If the costs of exporting a good to a country increase then that means the profit will decrease. It doesn’t automatically mean that prices will rise. Companies need to sell their goods at market in competition with other companies. If their costs of bringing their goods to market are higher it simply means that their margins will be less.

The ironic thing is that Australia is full of tariffs. Take wine as an example. The Australian wine industry has been protected by high import and customs duties on foreign wine imports for decades. Without those protections there wouldn’t be a wine industry in Australia.

The term free trade is in of itself entirely theoretical. In real life it just doesn’t exist. It is a giant con of the ages, much like global warming and the so-called benefits of immigration. And now finally it is slowly being revealed for the great deceit that it always was.

How Liberals And The Left Use Strategy