My reaction to the latest mass shooting in the US has been a resounding meh.

Apparently local deputies were sent to his home over 30 times for domestic abuse matters but never laid charges which enabled him to pass the background check.

But it’s the fault of white guys with guns so we better confiscate them real fast.

it’s the fault of white guys with guns so we better confiscate them real fast.

The school expelled him but hushed it up so as to not cause any scandal at their high brow Jewish school.

But it’s the fault of white guys with guns so we better confiscate them real fast.

The shooter himself has performed wicked and evil deeds that are not explainable. He did them with a gun which has been around since before most of you anti-gun nuts were born. Before we became ‘more woke’ as a civilization we would have simply performed a quick trial and then hung him high. As Old Remus notes, they would have served refreshments.

There is a lot of talk in the manosphere that this is what happens when you attempt to turn boys into girls. It’s all well and good to do this sort of brainwashing when they’re little boys: 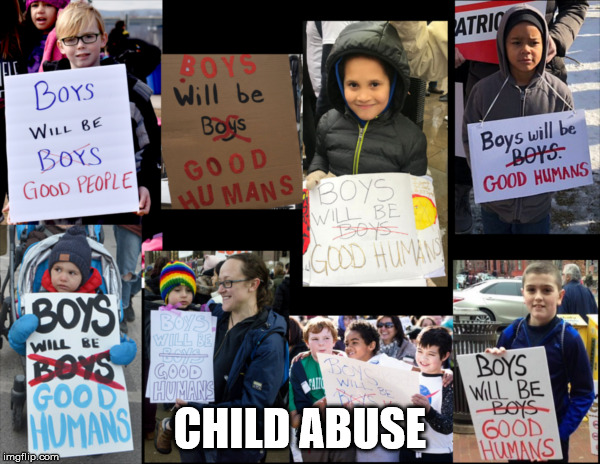 But when they hit puberty and get poisoned by testosterone this sort of childhood humiliation has the potential to come back and bite you big time. Is that the case with this shooter? How the hell would I know? He is someone who has perpetuated evil deeds. Hang him high.

But all of the other boys? The ones whose childhoods’ have been distorted; what will happen to them when they grow up?

Nobody really cares. Men are the expendables. We inhabit the far ends of the bell curve, not the safe and comfy female middle ground. We’re there to bail you all out when the shit hits the fan. But in times of plenty you can safely discard us, humiliate us, belittle us, impoverish us, patronise us, falsely accuse us, torment us, and persecute us.

But we’ll still bail you out next time when the shit hits the fan again.

Does that make us stupid or does it simply make you small and petty?

You with your convenient lives and your convenient lies. This is why my reaction to this episode is one of apathy. One teenage maniac with a gun in your schools and you immediately demonise the rest of us. But 100,000 teenage maniacs with guns about to invade the nation and you’ll be handing out white roses to those of us who don’t jump to your defense fast enough.

We’ve been here before, many times over. Nothing has changed and everything has changed. Color me unimpressed. Forgive me if I display an attitude of zero fucks given. It’s not even a case of you will reap what you sow. We’ll still bail you out next time. That is the expectation, and that will be the end result. So what’s the point of moaning about your disgusting ingratitude now?

The Battle of Iwo Jima started 73 years ago today.

Cpl. Don Graves was there, and to this day he hasn’t forgotten the words he read on a makeshift memorial at the 5th Marine Division cemetery at the foot of Mt. Suribachi.

May we all do our best with our tomorrows. pic.twitter.com/9mYreJ9tP1