How did they attain this, you may ask? Adelaide Now has the answers. 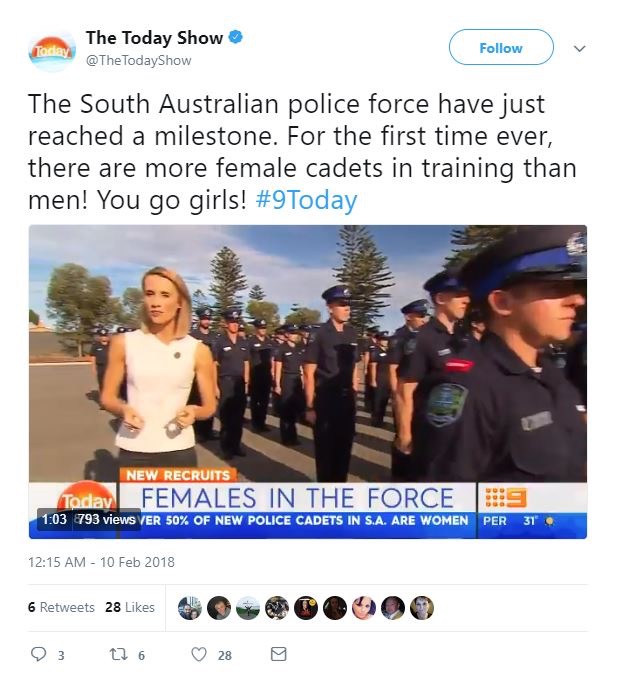 And hard quotas of course.

“Police Commissioner Grant Stevens said he was keen for the force to better reflect the community it served.

“This gender balance will be more representative, given that the community is about 50.8 per cent female and 49.2 per cent male,” he said.

“The benefits of achieving a gender-balanced recruitment process are many and include fairness, opportunity and enhanced organisational performance.”

Mr Stevens expressed confidence the quota could be met without any lowering of standards.

Of the 116 police cadets recruited this year, 80 were men.

The commissioner said that 70/30 recruitment had been relatively steady for some years and the current force was about 25 per cent women.

“I am pleased [the force] has a large number of dedicated, professional female officers but we can do better,” he said.

“Setting a 50/50 recruitment quota will significantly increase the ‘pipeline’ of future female leaders,” she said.

Given that the previous gender proportion was skewed towards male applicants, it’s good to know that many men (who would in previous years be accepted) were turned away in order to allow sufficient opportunities for female candidates; seems progressive to me.

I am glad though that policing has now reached a point where physical strength is not a material part of job performance and I just hope that the perpetrators of crime will not take this into account when deciding to resist arrest.

Broadly, this brings South Australia in line with the military’s stance on the “meritocracy or quota” question.

“Men are reportedly losing out on jobs in the Australian Defence Force as it looks to boost the number of women in its ranks.

Staff have been told to recruit only women, including in frontline combat roles, under threat of being reassigned if they ignore the directive, The Daily Telegraph reports.

Of 50 Army jobs posted this week, only 15 are available to men. The navy and air force are facing similar quotas. Only one of 18 navy jobs listed for the next six months is open to men and the air force has none at all.

Bernie Gaynor, a former Army officer and Australian Conservatives party member, says the ADF’s “politically correct policies have gone beyond bonkers. “It is now openly discriminating against males for its combat roles in the Army,” he told The Telegraph.”

The age of feelz over realz continues.