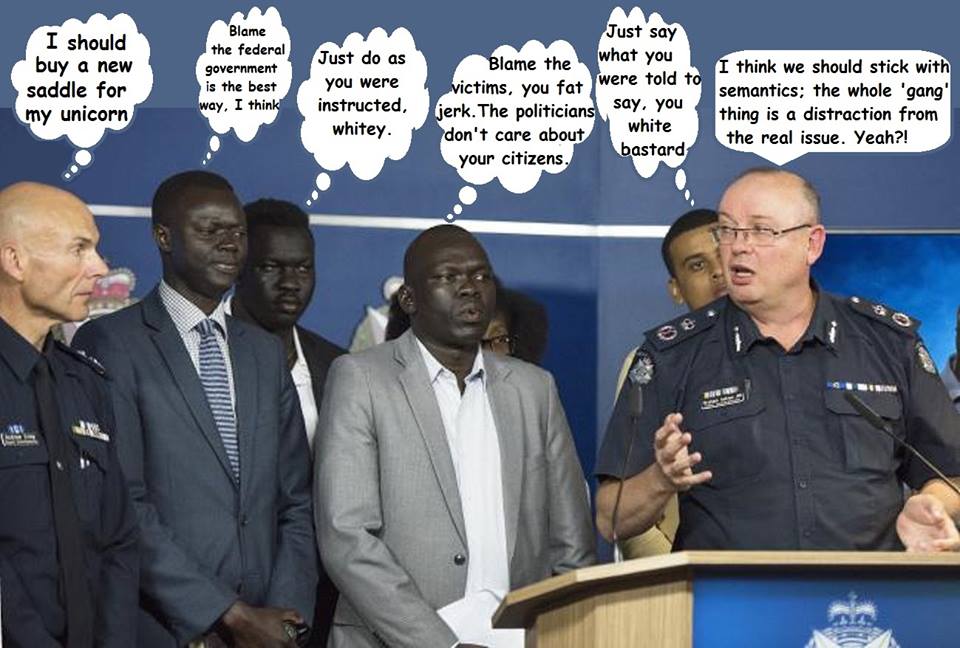 Since thuggish gangs of Sudanese teenagers have terrorised neighbourhoods, smashed up cars, ruined private property, assaulted police officers, and caused general havoc, violence and mayhem, various media outlets have been quick to rush to the defence of these criminal scum in a big ol power play of virtue signalling and bleeding hearts.

The ABC were quick to point out that in fact we did not have an ‘African Gang’ problem, by displaying crime statistics based on country of origin (I’m not kidding) proving the point that it wasn’t all Africans…just the Sudanese.

Yet instead of stating plainly – that from the data presented it looks as if Sudanese have a greater propensity towards violent crime than their African neighbours, the ABC hinted towards the progressive myths of systemic racism, police brutality and racial profiling all at once by making the claim that Sudanese were ‘overrepresented’ in the crime data. Nice one ABC.

Furthermore, they decided to pull the classic ‘not all Sudanese’ logic – portraying the community not as enablers turning a blind eye to the criminal behaviour coming from within their community, but as both victims and overcomers of racism (interesting how it’s always both), and it wasn’t long before the ‘n’ word started to appear.

“Every person I’ve spoken to in the community feels targeted”, Mr Mayek said. “People say you can’t go to shopping centres anymore without being called the n-word.”

“Afrikia Mart owner Agok Takpiny said the recent discourse had affected him a lot. He said he has been called “the N word” and had the public give him bad looks because he is South Sudanese.”

But hey, according to Mr Mayek – a prominent figure in the Sudanese community, these were all just ‘incidents’ committed by…Australians?

You heard him right:

“This generation are not at all connected to South Sudan, they don’t even enjoy South Sudanese cuisine. Apart from race, they’re Australian.”

If this frightens you…I think it should.

If you have enjoyed this article and would like to leave a tip, you can send it to my Bitcoin account. 1EQS6EPQW1izPYYMNwJLQ4JKJC3iyJfiX8

Thanks for your support I really appreciate it.