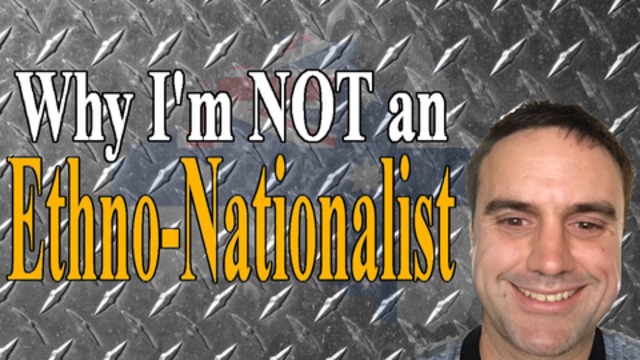 Editor: Matty’s Modern Life has produced this article in video format available at BitChute, for those of you who want to understand his argument without having to take your eyes off the cricket.

Since I published my first article on XYZ way back in October 2016, I’ve grown to love the site. Its core mission of fighting the Left is a noble and moral one. XYZ has a variety of views on a range of topics and today I am going to address one area where many XYZ readers disagree; ethno-nationalism.

I am not an ethno-nationalist, I don’t believe a nation needs to be dominated by a single ethnic background in order to remain a strong and prosperous nation. That’s not to say I don’t sympathise with the arguments of ethno-nationalists. I understand their arguments and they are strong ones.

After all, if Japan, Israel, China, Korea and other nations are allowed to have a state based on ethnic origins, why not Australia? It’s a fair question without an easy answer. While I’m not opposed to Australia becoming an Anglo-ethnic state I’m also a pragmatist. The horse has bolted and it ain’t ever coming back.

Nor is that to say that the demographic decline of Whites in Australia should be welcomed. Whites tend to have relatively high IQ’s and, aside from notable exceptions that we will discuss in this column, tend to value true individualist liberalism. The more White people in a society the safer, richer and healthier that society tends to be; this is a fact. To a lesser extent the same is true for East Asians, especially those who come from Japan, Taiwan and Korea.

Australia is a nation with citizens from all corners of the globe whether we like it or not, but this isn’t the number one reason I am not an ethno-nationalist. The biggest reason can be summarised in two words: White women.

I want to share a New Year’s Eve story just to provide some context. As many of you know I’m an Uber driver. It’s been a great stop-gap job while considering my next career move. You meet a variety of people but this is a story worth telling.

Two relatively attractive White women needed a lift to a party in the city, and the trip started pleasantly. They were friendly and in good spirits, laughing at my jokes and having a good time. That is, until I told them I wasn’t on Facebook. They asked why and I told them the honest answer; it’s a toxic website that is openly hostile to free speech.

This seemed to shock them a little bit and they made the usual response you expect from your classic social justice zombies; “But what about hate speech? People shouldn’t be allowed to say things that are really offensive and hateful.”

The conversation went about as you would expect from there on, although to their credit they didn’t get abusive, just shrill. Also to their credit they didn’t pretend to support free speech with the now clichéd self-parody “I believe in free speech but not hate speech.” They made the usual irrational statements based on sheer appeals to emotion; “But minorities could be really offended and that hurts them a lot,” “You shouldn’t be allowed to offend people because feelings,” etc…

I calmly made arguments based on facts, evidence and reason, citing the fact that when people lack free speech to change society, violence tends to occur.

I held back the urge to explain to them how deeply offensive their views are to me in every way possible. Being against the right to express any opinion goes against everything I believe on a philosophical, a religious, an intellectual and emotional level. By their own logic they shouldn’t be allowed to express that view in my presence as it is truly offensive to me.

At any rate, I dropped them off thanked them for the business and moved on to my next passenger. They made poor arguments but the debate seemed pleasant enough. That is, until I got an email from Uber informing me that someone had complained about my behaviour because I’d made them “uncomfortable.”

Uber didn’t mention any specific passengers but it couldn’t have been anyone other than these two White girls, as every other passenger had been nothing but pleasant and relaxed that night.

Uber is my living and by making this complaint these two women have threatened my livelihood. Uber won’t take any further action but it does go on my record as a driver and they stated in their email:

“Further feedback that suggests inappropriate or unprofessional behaviour may prompt us to review your access to the Uber app.”

Keep in mind, all I did was express the view that freedom of speech is an absolute human right. This offended these women so much they took the time to write a complaint to Uber that could affect my income in the future.

Obvious childishness aside, my point is simple: White women are the biggest enemy to a free society. Yes, this is a generalisation and there are plenty of great White women out there, the majority most likely, but let’s look at the facts.

White women are the loudest and worst feminists, have the most disgusting public policies, and run the most dangerous and violent political parties in the country. When White women get into power they distort the truth and flat out lie in order to push their political agendas. It’s no coincidence that Hillary Clinton is a White woman.

White women are at the forefront of the assault on Western civilisation. They are actively doing all they can to tear down the system that gave them a voice in the first place.

I want to make it clear, being a White woman doesn’t automatically make you Satan. As a White man I have plenty of White Females in my family that I love and cherish who absolutely hate the direction our nation is going.

Go and watch Social Justice Warrior fail videos and notice how many of them are White chicks or dudes cucked by White chicks.

Do I hate White women in general? No, of course not. In fact I love many of them dearly, even some that have these Leftist beliefs. For many it’s not their fault, they’ve simply been brainwashed by older White feminists after being forced to use the public school system.

Being a brainwashed zombie is curable. Basing your entire life and career on an unhealthy obsession with man-hatred while lying through your teeth to gain wealth and power in the name of “female empowerment” is evil, and needs to stop immediately.

Meanwhile, Asians continue to give life to Christianity in Australia and since returning to church I can’t help but notice how many of those attending are young Asian women.

Christianity is key to retaking the West from the hands of the state-worshiping Marxists. That means accepting the truth, it’s too late to be an ethno-nationalist in Australia. Our only pragmatic choice is Christian civic-nationalism.

It’s a nationalism based on core Western values of free speech, capitalism, the rule of law under a constitution, and individual liberties. A nationalism that acknowledges the fact that our British heritage is our most important heritage, not just because they are our ancestors but because they developed the most moral and advanced civilisation in history. They did it by spreading Western Liberalism around the world. It’s not our “Whiteness” that makes us rich, it’s our cultural heritage.

When Marxists talk about destroying “White culture” what they really mean is they hate Western values and true liberalism. Rather than call it “White culture” I call it Western Liberalism, or classical liberalism. It’s an idea that comes directly from Jesus that exploded with the invention of the printing press and rise of Protestantism. The idea of the divinity of the individual under God.

What divides us isn’t race, it’s culture. I don’t want Somalian teenagers running amok in my home town any more than I want scungy White women telling their cuck boy orbiters that blowing kisses is a “Nazi salute”.

Yes, we are more likely to share cultural values with people who share our ethnicity. But as mentioned we are also more likely to be diametrically opposed to them.

The problem isn’t even that we allow certain cultures in. The problem is we let them in, then pay for them to not integrate. The Somalians running around bashing people and trashing community centres are almost certainly being funded by the State.

People are coming to Australia from all parts of the third world, only for the state to hand them Australian taxpayer money. This is the real crime; it’s not the letting in of foreigners that’s the problem, it’s the letting in of foreigners who are unable to integrate due to their intelligence, upbringing and culture, then handing them stolen money so they never have to change or improve.

In fact, those same Leftist White women, along with their cucked male and diversity hire entourage, see cutting off the welfare of foreigners or threatening them with deportation as “racist”.

Welfare and a state bloated to the size of an unholy behemoth is the root of all our nations current problems. Welfare has brought about the largest debt bubble and most bloated governments in history.

The first welfare in Australia came in the form of the old-aged pension back in 1908. It is no coincidence that women won the vote roughly ten years earlier. The same pattern is repeated in the US where women’s suffrage passed federally in 1920 and ten years later social security become policy through the New Deal.

The UK’s history is a little more complicated – they first start handing out stolen taxpayer money in 1908 but it was only small. Once women won the vote in 1918, welfare spending started to skyrocket.

I’d imagine most developed welfare states have a similar pattern. You let women vote without conditions, you get increased spending on welfare. Not that giving women the vote was the wrong thing to do, just that it should have come with caveats such as “if you take money from the State you lose the right to vote.”

So no, I’m not a white ethno-nationalist and I don’t think I could ever be one even if I tried. What matters isn’t race, what matters is culture (this includes religion, language, ideas, art, etc…) and right now our culture is dominated by State-worshiping Marxist White women who complain at every offence taken. The true enemy are overly sensitive, pandered, whiney and privileged White female snowflakes.

Think about your interactions in the past, think about the times you’ve been told off for being not PC enough. How often does it come from either a White woman or some soyboy they’ve cucked?

Say it all with me; fuck the Communist Left and fuck the crinkly White women who lead it. Fuck the pussy whipped little soyboys who run around crunched over, desperate to avert their eyes so as not to offend their goddess. This is despite the fact that no woman wants to sleep with a soyboy.

Fuck the women in power who refuse to tell the truth for fear of causing “offence”, instead preferring to sell out the future of our children and grandchildren.

You can visit MattysModernLife at Minds.