Christopher Cantwell: Well here’s the thing about the theme of the Unite the Right rally. So all the cucks punched out, shockingly enough.

Well it serves its purpose within a sense, whether people realise it or not. Because what we do, whether anybody wants to admit it or not, is we give all these other people license. If it wasn’t for Richard Spencer, and Christopher Cantwell and TheRightStuff.biz, Mike Cernovich would look like an extremist.

Because we do what we do, Mike Cernovich can get away with worse sort of, I mean he still ends up on the Anti-Defamation League’s murder list or whatever, but like he can do whatever he wants and say ‘I’m not a racist, those guys are the racists’ and he just points Right.

Like literally anybody can do that now. You know what I’m saying? Like, I will show you what racism is dummy. Because the Leftists want to make, and according to the Democratic Party, Paul Ryan is a racist.

So if they’re calling Paul Ryan a racist, and then Paul Nehlen is reading Culture of Critique, it grants a little bit of room to breathe for these other people, and that’s really what a lot of the Overton Window is about.

We are changing the range of allowable discussion. The fact that guys like me and TheRightStuff.biz can make our living doing what we do, proves that it’s possible to do that, and all these other people are terrified that they’re going to have their lives destroyed if they criticise Israeli foreign policy in a very milquetoast sort of fashion.

They’re not capitalising on it yet, I’m certain that they will at some point, but it gives them the ability to point Right and say ‘No, the Alt Right are the real racists.’ 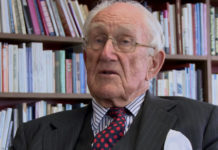