Here we go again. 18 years ago a massive vote was held in Australia to determine whether the nation would remain tied to the British monarchy or become a separate republic. The media, major corporations, and the elites were certain of the outcome; it was to be a republic. Why, all of the opinion polls showed that to be the case. But events moved in an entirely “unexpected” direction when the stupid proles voted the wrong way. The push for a republic had been stopped dead in its tracks. The public had been asked and the public had responded – no republic.

The great strategic mistake that the pro-republican camp had made was going in too early. You can’t convince a population made up of mostly Anglo-Saxon stock to abandon its own historical monarchy. That way madness lies. What you need to do is to bide your time and slowly bring in millions of immigrants who couldn’t give two figs about whether the country is a monarchy or a republic, just so long as they continue to get their welfare and can bring in all of their Godless relatives.

The average annual intake of immigrants over the last 18 years has been around 250,000 new arrivals per year. That adds up to 4.5 million people, the majority of whom hail from Asia or the sub continent. These numbers do not include the kids that they have had since they arrived. The present population of Australia is just north of 24 million. Here’s some handy statistics on the topic: 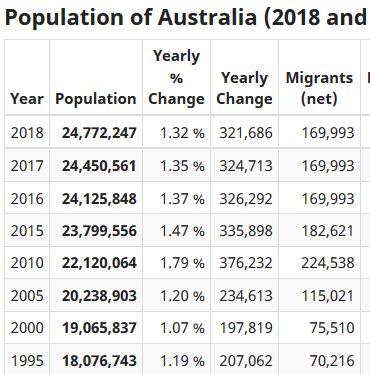 Notice that the numbers of migrants given is net. The net refers to a part of a whole following a deduction. In other words, even though around 250k foreigners got in last year, a bunch of people already in Australia decided to make for the exit door. The 169,993 number is the total after deducting those people who looked around and decided that Australia wasn’t the place for them anymore. People like myself and the good wife. As I said yesterday, when the darkies are flooding your neighborhood the only option is to sell up and get out.

So the pro-republic camp got the immigration issue sorted in their favor. But they needed someone to not only to continue to burn the flame but to be in a position to light it when the time was ripe. That man is the present Australian prime minister, Malcolm Turnbull who coincidentally was the leader of the push for a republic back in 1999.

It’s very important to understand that Turnbull’s act of reviving the push for a republic is not meant to be a diversion away from the real problems that are ruining the country, such as expensive and unreliable energy and the aforementioned immigration. It’s not a diversion for the simple reason that the push for an Australian republic is the only reason that Turnbull got into politics in the first place. It was his motivation for knifing Abbott and stealing the leadership of the country. Turnbull is desperate to be the first president of an Australian republic, and he’ll be damned if all of his hard work over two decades will only result in some other grinning fool assuming the great prize.

Watch these two resident idiots talk back and forth about the topic at hand. The discussion is simply about whether the Australian people would want to have a vote on the issue, as if the events of 1999 never occurred, despite Sky News rolling stock footage of the previous vote all those years ago. At the end there is some other fool who has been given a “job” by the prime minister to “travel around the country and consult with the Australian public and develop a plan”.

How is it possible for this inanity to pass unchallenged? Australians did indeed have their say in 1999, and they rejected the idea of an Australian head of state. So what is with all of this talk of consulting with the Australian people to see if they want to have their say when they already had their say and they said it very loud and clear indeed.

The answer lies in those immigration numbers. Because there are a great number of so-called Australians who weren’t around back then to have a vote. The quid pro quo was citizenship for votes. They got their citizenship but now they have to cast a vote so that Maclom Turnbull can becomes the first president of a nation that he has spent the last 20 years selling down the river for his own ambitions of power.

Turnbull’s little flunky will indeed travel the country seeking out the opinion of the Australian people. But he will only be making a certain number of stops. These visits will be to key ethnic enclaves that have only come into existence in the last 20 years. Enclaves that have been entirely created in order to secure a vote. After that, the country be damned.