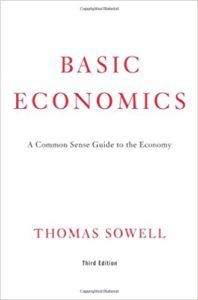 I recently read through Thomas Sowell’s book ‘Basic Economics‘ and was quite blown away with his insights. So often I find the media are quick to pull the wool over our eyes by appealing to our more sentimental nature (ABC does this ALL the time), so at least for me, ‘Basic Economics’ was a real eye opener.

I wrote this short article outlining some of the key arguments that get used in the book. You might find it useful, if not entertaining at the least.

As with many of the ideas presented in the book, the idea that price fixing creates homeless people at first seems counterintuitive. If after all, we lower the price of housing, wouldn’t it mean that everyone gets a ‘fair go’? The problem with this approach is double. Firstly, when price is decreased, it allows higher income earners to buy up additional real estate. Secondly, it means that there is less money for maintenance. As the building deteriorates, landlords are forced to close due to safety concerns.

2. Illegal capitalism started to take a hold in communist Russia because it was more efficient

Communism is always a bad idea simply because of inefficiency. When you live in a country of ‘black soil’ (чернозём) and 5 million people die for lack of bread, you know you’re in for a bad time. So inefficient was the communism at delivering even the basics, that underground capitalism started to sneak its way into the system – much in the form of bribes to government officials to allow supplies through checkpoints, as this proved to be much faster than going through conventional government avenues.

3. Increasing the price of emergency goods such as bottled water at the time of a natural disaster doesn’t make you a bad person.

During natural disasters such as earthquakes etcetera, frightened people are much more likely to hoard precious resources that could have otherwise gone to other people. Try all you want to tell your customers ‘one bottle per person please’ but in a disaster situation, it’s every man for himself in a scrambled frenzy of chaos.

Secondly, increasing the price of emergency goods means that more water from out of town is likely to arrive sooner, since there’s more profit to be made. Sure enough, you’re selling water at $100 a bottle (and probably behind the counter at that) but it’ll mean that people think twice about buying that shrink wrapped pallet pack of bottles and using it as an expensive chair when the rest of the town is desperate for clean water.

4. Profit isn’t just the arbitrary amount set by the seller because of their greed.

Many a rookie academic has made the assumption that profit is just some arbitrary additional cost that the seller adds onto the product, selling it for more than its actual worth. But this isn’t the case.

If sellers make their prices too high, people go somewhere else. Interestingly enough, all prices for say… a bottle of full cream milk, are around the same. You’ll never see milk sell for more than a few dollars. So to assume that all the milk sellers all have this secret pact or underground society where they set the price of milk for more than its worth is ridiculous. Prices are set by the consumer and how much he or she is willing to pay. ‘But what about monopolies?’ you say. I’m glad you asked.

5. Monopolies, duopolies, and cartels are very difficult to maintain in a completely free economy

One of the greatest fears of communists and progressives is monopolies, duopolies, and cartels. Ironically, under communism the government monopolises virtually everything. As Thomas Sowell so rightly points out, monopolies in a completely free market economy are very difficult to maintain, since there is always going to be someone else somewhere finding a way to sell the same product more cheaply and effectively, or substitute the product for something else which serves the same purpose.

Duopolies and cartels, though they may appear to be working harmoniously together, tend to break down from the inside as one party tries to gain a friendly edge over the other. After this it’s all back to regular competition.