Back in August, US Attorney General Jeff Sessions told the media that the Department of Justice he leads was investigating unprecedented numbers of leaks of classified material.

At the time of the media conference, full details of US President Donald Trump’s phone calls with foreign leaders, including our own attempt at one, Malcolm Turnbull, had not long been leaked to certain press outlets. Through July Trump had been attacking Sessions on Twitter for, in the President’s view, not doing enough to prosecute Hillary Clinton for communicating via a private server rather than through proper channels, as Secretary of State in the first Obama regime.

Here is Sessions early into the media conference explaining just how bad the leaks to Democratic operatives with bylines, otherwise known as ‘journalists’, were:

“Since January the Department has more than tripled the number of active leak investigations compared to the number pending at the end of the last administration. And we’ve already charged four people with unlawfully disclosing classified material or with concealing contact with federal offices.”

Wait, what? Since January? But Sessions wasn’t yet Attorney General? What is he talking about?

We found out on the weekend: 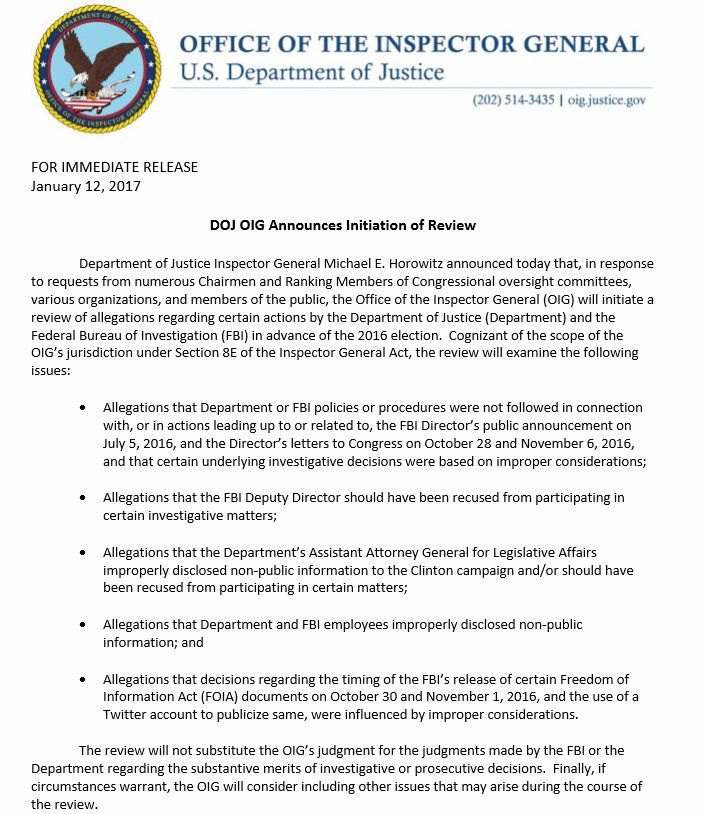 You can read it for yourself: sufficient numbers of people in Congress and the broader community were so concerned the FBI (which is a branch of the Department of Justice) had bungled the Clinton server issue that the Inspector General of the Department had to act. Further, FBI employees had been accused of leaking information – information such as the notorious ‘Steele Dossier’ that said Trump had hired Russian prostitutes and pissed on a Russian hotel bed that Obama once slept in.

What else happened over the weekend?

Well, for one thing news came out that some months ago, in the northern summer, the Deputy Head of Counterintelligence at the FBI, Peter Strzok, had been demoted (to human resources – so you know it’s definitely a demotion) for essentially being a Hillary fanboy.

With thanks to The Conservative Treehouse, the XYZ shares this handy summary of just how important an FBI employee Strzok was:

So the bloke who interviewed Hillary Clinton and urged then FBI boss James Comey to not pursue criminal charges interviewed Trump’s National Security Advisor about his contact with the Russian government in December, well after the election campaign was over?

Sounds incredibly dodgy, and we suspect there is a lot more to come. The FBI’s Andrew McCabe, whose wife Jill received $US700,000 from the Clinton campaign to unsuccessfully run for the Virginian (state) Senate, must surely be considering his future.

Thanks to the Obama administration’s Deputy Assistant Secretary of Defense, Evelyn Farkas, we know Trump and his team were spied on and information about them was leaked to the media.

We also know that the DoJ was aware some of its senior employees, and no doubt employees of other departments, were leading this leaking – the investigation was instigated 12 days before Trump was inaugurated.

Important people will be going down soon – bigly. Believe me.