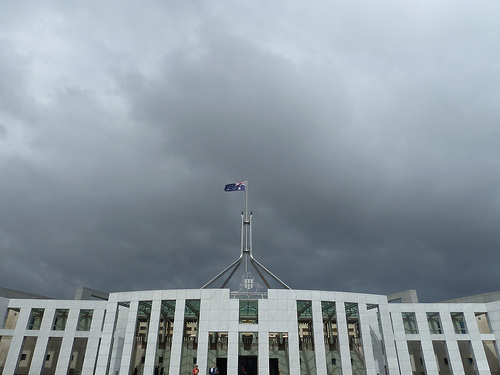 After the Coalition’s loss in the Queensland state election, Prime Minister Malcolm Turnbull has played to one of his strengths, namely, to shift the blame for the LNP’s poor performance onto others.

Apparently, it isn’t his fault that the federal Liberal Party has veered so far to the left that conservatives cannot bring themselves to vote Liberal in a state election. It’s the fault of conservatives who felt that One Nation aligned more with their values, and were prepared for the Coalition to lose to make that point:

“Malcolm Turnbull has told One Nation voters they helped Queensland Labor retain power as he flagged a campaign in the next federal election arguing Pauline Hanson was helping Bill Shorten into the lodge.

“The Prime Minister said this morning the more-than-13-per-cent of Queensland voters who supported One Nation played into the hands of their political enemies. He said the only way to get a conservative government was to vote for the Liberal or National parties.”

“The One Nation voters, I want to say to them: your votes for One Nation have assisted Palaszczuk,” Mr Turnbull said. “When we come to the federal election, we will be making that point very, very strongly.”

No, Malcolm, you have assisted Labor by ousting a sitting conservative Prime Minister, and then dragging the Liberal Party so far to the left that your party’s traditional base sees you as Labor-lite.

Actually, voters have shown that they would rather have a conservation Coalition than a Labor-lite Coalition government.

Lucas Rosas has argued that Australia needs a conservative party to the right of the Libs to drag them back towards the centre in the way that the Greens drag Labor to the far left. He also made the point that One Nation didn’t necessarily need to win any seats in the Queensland election to make an impact. Clearly, One Nation have achieved this goal – the treacherous Turnbull has explicitly identified One Nation as having cost the Coalition an election.

He might be trying to put his own spin on it, but this could be a fatal mistake, because he has indeed identified the factor which cost the Coalition the election.

George Christensen has identified it too, minus the spin:

To Qlders who voted One Nation, I’m sorry we in the LNP let you down. We need to listen more, work harder, stand up more for conservative values & regional Qld & do better to win your trust & vote. A lot of that rests with the Turnbull govt, it’s leadership & policy direction. pic.twitter.com/0vCREdd7mn

His collegues might be pounding him for it, but they know he’s right..