The Burn Hollywood!­™ meltdown has upped its pace into the really serious level with revelations that the man who sodomised child actor Corey Haim was none other than Charlie Sheen. The assault occurred on the set of the film Lucas. To give you an idea of the age of the young actor involved, here is a shot from the film. 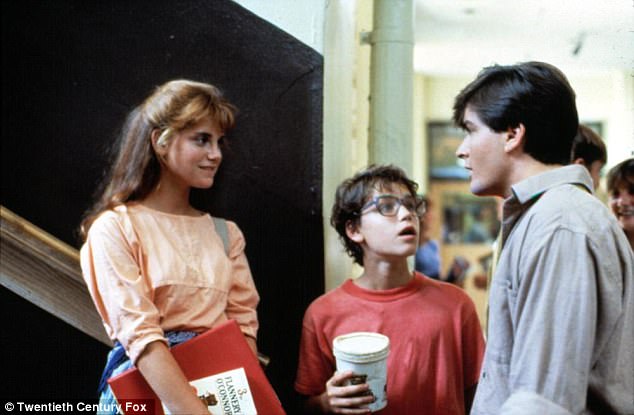 That is 13 year old Haim in the middle with Sheen standing next to him. I’m including the photo here to underline just how much this isn’t okay. It can be all too easy on occasion to deceive ourselves into thinking that maybe there were extenuating circumstances or something. Haim was a boy. A kid. And according to his colleague Corey Feldman, he spent the rest of his life trying to recover from incidents like this before he died in 2010.

“In 2011, according the the Enquirer, when Feldman was asked about Sheen he said: ‘I’m not a huge fan of Charlie Sheen…especially the way he’s affected other people that I know.’ Tellingly, Feldman also said Haim ‘fought for his entire life to recover from those early experiences and to get his life together.’

Now Corey Feldman is finally being taken seriously after years of attempting to file police reports on the sexual assaults that he suffered as a young man.

‘Corey Feldman filed a report with the Los Angeles Police Department. There is no further information at this time, and his report is being investigated,’ a spokesperson told DaillyMail.com on Tuesday. Feldman revealed he had filed a report on Monday.

‘IMPORTANT CAMPAIGN UPD8: I JUST COMPLETED A FORMAL SIT DOWN INTERVIEW W @LAPDHQ SPECIAL DIVISION, & GAVE THEM ALL THE INFO I KNOW! THIS WAS OFFICIALLY THE 1ST FORMAL REPORT EVER TAKEN ON ANY OF MY CASES, AS SBPD NEVER FOLLOWED UP BACK IN 1993, & HAS NO RECORD OF MY COMPLAINTS,’ wrote an animated Feldman on Twitter.

“He then added: ‘THE LAPD WILL BEGIN AN OFFICIAL INVESTIGATION NOW! THINGS R HEATING UP, IM PRAYING 4 SAFETY!’

Can you imagine how Feldman, a man who really did suffer monstrous sexual assault, felt with the explosion of the moronic “me too” social media campaign? After literally decades of having his claims disbelieved by the entire world, now some actresses who slept their way to fame were being believed?

Let me tell you something about ditzy actresses who supposedly suffered sexual harassment from men like Harvey Weinstein. If you got into Weinstein’s room you Goddam knew what you were in for, and you had already accepted that as the price to pay to achieve your ticket to wealth and fame. Not only that, but in order to get into that room you would have had to have sucked a hell of a lot of cock already.

That is not being a victim. It doesn’t make it acceptable but don’t give me that victim bullshit. Corey Feldman and Corey Haim, who were sodomised on set by older men that they looked up to, these are what are known as victims. There was no career advancement for these boys. It was pure sexual assault.

Hollywood in their annual bout of academy award narcissism would have us believe that they are all about love and acceptance and all of the other bullshit platitudes that the left hide behind in the entertainment industry. As always, the words do not reconcile with the only thing that counts; the actions. Where has Hollywood been for the past 30 years as Feldman and Haim repeatedly made their claims and tried to be heard?

Giving themselves awards and getting celebrity selfies, that’s where.

Homosexual assault on teenage boys damages them irreparably. Why else do you think that the suicide rates in gay men are proportionally so much higher than the rest of the male population? And yet at the same time that all of this is going down we have the pure evil of the progressive left who are determined to teach more young men to be gay.

“A professor at the School of the Art Institute of Chicago (SAIC) recently argued in favor of using art education to help “kids turn out queer.”

There will always be a small percentage of effeminate men who are gay. But let me tell you about a very dirty secret of the homosexual world, a tactic that I was specifically warned about by a gay man not much older than I was when I was a very young man in the entertainment industry. This man warned me about not going to any late night parties where the host was a gay man. The tactic went like this:

This is what is known in the gay world as a conversion.

I would wager that the gay suicide rates would be much higher among the converted men than those who were naturally effeminate and predisposed towards homosexuality.

I once explained this tactic on a conservative online forum. The forum went literally berserk. Apparently I was making things up. In their minds there was absolutely no way that gay men would ever stoop to such tactics.

‘At some point during the filming [of ‘Lucas,’ Haim] explained an adult male convinced him it was perfectly normal for older men and younger boys in the business to have sexual relations, that it was ‘”what all guys do,” Feldman wrote.”

Is this any better or worse than the tactic that I just described? Or is it about the same? Just why are these gay tactics so unbelievable? Could it be something to do with the fact that the normalisation of homosexuality to the extent that it is taught in schools means that this sort of thing will also be par for the course? Does that make people feel very uncomfortable? What was the headline of the piece I linked to earlier?

But nothing to see here, right? Just move along there, it will all be fine. Just like the Second Vatican Council’s brilliant idea to let openly gay men into the priesthood. I wonder how the old Boy Scouts are going to fare in the coming years, what with their progressive decision to allow openly gay scout leaders to go on camps with the boys in their charge. It will all be roses, right?

It’s not enough that evil sodomites like Charlie Sheen are prosecuted and cast out of the entertainment industry. This is bigger than Sheen and bigger than Feldman. A bright light needs to be shone directly on the worldwide gay industry. Homosexuality needs to be banished once again to the murky sidelines where it belongs. It is not a lifestyle choice. It is quite simply the betrayal of young men.

But as we have seen for the past 50 years of “progressive change”, young men don’t count anymore.