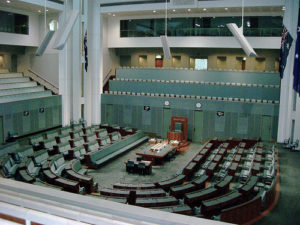 This is getting beyond a joke.

Federal Energy minister Josh Frydenberg has just been forced to deny suggestions that he could be a dual Australian-Hungarian citizen and thus ineligible to hold his seat. Apparently there is some confusion over whether his mother, born to Hungarian Jewish parents in Hungary during World War 2, passed him Hungarian citizenship.

This is after Senate President Stephen Parry was forced to stand down after suddenly “remembering” he was British. Apparently this recollection happened some time ago but Turnbull Communications Minister Mitch Fifield advised him not to communicate with anyone about it.

Let’s not forget this entire saga began in July when Scott Ludlum of the Greens finally gave in to the pressure that had been mounting on him for years and announced himself a Kiwi.

Stephen Parry would have watched all of this and still did nothing.

While minor parties and independents can maybe be excused for not properly vetting their candidates or knowing the constitutional requirements of a parliamentarian by heart, the major parties have no such excuse.

While it may have come as a surprise to the internationally minded Greens members that they had to be Australian citizens at all, the Liberal Party has been a major player in Australian politics since the end of World War 2 and has spent more time in government than any other federal party. Their smaller offsiders the Nationals have been kicking about in one form or the other since the 1920s. The Labor Party is almost 120 years old and helped to federate the damn country.

There are no excuses.

These people are responsible for passing the laws of this country in accordance with, and viewed through the prism of, our Constitution.

Have any of them even read it?

You have to remember, a large proportion of both the ALP and Liberal parties are trained lawyers. To make it up the greasy pole in either of those power blocks you usually have to start building a powerbase and sucking up to the right people straight out of high school. Most of the people sitting in a major party in Parliament today have spent their entire adult lives campaigning, betraying and backstabbing just for the chance to sit their usually ample arses on the comfortable red or green seats that they now occupy.

The process must require a lot of concentration if it has distracted so many of its participants to the extent that they never even bothered to check if they were eligible for the role they had spent their every waking hour striving to achieve.

Some of the saner people in politics like Michael Kroger, Eric Abetz, Llew O’Brien and Kevin Andrews are backing a full audit of who is and isn’t actually entitled to sit in the well-funded, luxuriously padded locations they currently occupy, but more than a dozen Labor and Liberal politicians with dubious backgrounds refuse to release documents proving they were eligible to be elected.

The Labor party in particular has circled the wagons. Being a party traditionally stacked with recent immigrants it’s possible they have even more to fear than the Libs do. Bill Shorten has run away from the very idea of a full audit with his hands in the air screaming like a teenage girl with a snapped bra-strap.

And they can’t even properly read the job description.

Want to know how pathetic that is? Derryn Hinch did it. The human headline managed to do politics better than people who have trained their entire lives to do nothing else.

For the first time since Utegate I actually find myself empathising a little with Malcolm Turnbull. Here he was overseas commemorating the Battle of Beersheba looking every inch an international statesman. After a horror year he finally had managed to get one decent news cycle.

King Malcolm visited the sights, got lots of screen time with Bibi Netanyahu and even snuck in a one hour trip to the occupied territories. He walked up to his press conference expecting lots of high minded questions about world affairs and Middle East peace, the sort of waffle he clearly loves.

Finally after all the bad polling, after all the tedious minutiae of domestic politics the Lord of Wentworthia had a chance to stand as a colossus on the world stage.

And then he gets asked yet again why his parliamentarians keep forgetting which countries they’re citizens of.

I take back my original statement from the beginning of this piece; this situation can’t be getting beyond a joke, since to have been a joke in the first place it would have to have been at least a little funny.

This isn’t funny, this is sad.

Photo by Between a Rock