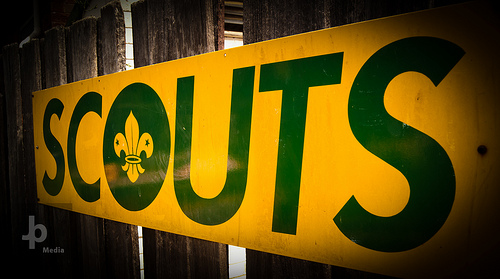 Over at www.pushingrubberdownhill.com, Adam Piggott holds a popular segment where he expands on a Comment of the Week. His COTW from October 21 proved quite interesting.

Comment of the week comes from long term commenter Allen on the Scouts Australia article.

“Fortunately I was able to teach my boys myself about the outdoors, and they got more out of it as well. I still laugh about one aspect of it though, my wife’s input. Before the first trip into the wilderness my wife said only one thing about it to me. “Bring my boys home safely or come home being carried.” Quite Spartan of the woman. The great thing about the wilderness is that boys learn that it is indifferent to them and might actually kill them if they are unwary. Good prep for life.

“People who want girls to be admitted to Scouting seem to be completely ignorant and indifferent to the fact that male bonding comes through shared hardship, and competitiveness. I don’t think they have the slightest clue that male bonding is one of the very reasons our species survives the crucible of evolution.”

The second paragraph is the part that I think is really important.

That women are completely indifferent to how males bond is not surprising. Women in general approach things from an emotional viewpoint, and their subconscious use of this tactic is not bad; it just is. However, what is disappointing is that men have not recognised this propensity and effectively countered it.

Or perhaps it would be far more accurate to say that men once recognised and countered women in this manner but then they began to fail in this regard. Scouts Australia began admitting girls in 1971, so the failure has been going on for a very long time indeed.

So what changed? What caused men to begin failing so badly all around the same few years? In my mind it was the invention of the contraceptive pill that was the beginning of the great failing. The pill exploded the sexual market, and as such men were not competing anymore to find a wife; they were competing to get laid. This is a crucial distinction because men, at least back then, only got married once. Whereas men can get laid many times if they choose to put some effort into it.

This radical distortion of the sexual market caused men to outwardly compete in areas that before were not even seen as being applicable. So the entryism of women into male dominated areas such as the Boy Scouts was endemic of men competing for women’s sexual favors. This coincidentally was also the period when modern blue pill beta male behaviors began to overtly manifest themselves.

Men are ultimately responsible for letting women into areas in which they have no business being present, and as such as men we must hold ourselves responsible. This is a very good thing because ultimately it means that we have the power to reverse this. If the tide of women infesting our male institutions was due to some outside influence over which we had no control then we would truly be doomed.

But it is not. We have the potential power to expel women from these important male institutions. Or at the very least to learn from the experience and set up new ones with iron clad rules to prevent any future intrusion.

It is our duty as men to know and understand that male bonding comes through hardship and competitiveness as Allen states. It is thus our further duty as men to ensure that avenues for such bonding are created, managed, and protected for the young boys of today. And it is our final duty to ensure that these young men and boys are also educated in the very real dangers of letting these institutions lapse and decay to the disadvantage of their future sons.

Each generation inherits the institutions and ceremonies of not just the preceding generation but of all preceding generations. The Baby Boomers failed very badly in this regard. But I am not quick to judge them because I very much doubt that they had the capacity to recognise just how deadly the introduction of the pill really was.

But 50 years later we are able to recognise how it completely changed the social landscape. It is thus our responsibility to repair the damage done and ensure that protections are put in place for it to never happen again.